The “Porchetta Trevigiana” is a roasted leg of pork with its rind (ham), obtained from an adult pig.

Municipality of Cornuda and municipalities of the province of Treviso.

Porchetta is a dish originally from Lazio, whose history dates back to the times of the Roman Empire and the preparation techniques are even mentioned in some writings by writers and artists of 400 BC. It seems that the product was the favorite dish of Emperor Nero, famous for his refined palate, with which he organized sumptuous banquets with friends. In a recipe of “DE RE COQUINARIA”, at the time of Tiberius, this is how we talk about the preparation of a porchetta of those times: “clean the pig, empty it of the throat part, adjust the neck before it has to harden, open the ear under the skin, put some Taranto sage […] Repeat with the other ear. Insert a filling in this way: chop some pepper, marjoram, a little laser root, wet with apicium sauce, add cooked brains, raw eggs, pork broth, birds if you can have them, pinocchios. Tura with parchment and alloy; then put it in the slow oven. When it is cooked, grease it well and serve it “. Porchetta nowadays is a product that is now widespread throughout the country, with small local variations linked to the use of particular spices or herbs, appreciated for its taste and for its simplicity and variety of use. Porchetta was born as a Treviso specialty in 1919, baptized by Ermete Beltrame in his brewery under the Palazzo dei Trecento in Treviso.

Porchetta is a kind of ham obtained from a one-year-old pig. It can be found in bone or boneless in a cylindrical shape. Internally it has a whitish color, with parts in which spiciness is evident, while externally it is golden. It is very fragrant, tasty and tasty. It is not a fatty food, as, during the cooking phase, the fats are dissolved by the heat and collected in special trays. It should be served cold and, despite being free of additives and preservatives, it remains tasty and fragrant for at least two weeks if kept in a refrigerated place.

The suckling pig is raised in bran and milk substitutes and, after about a year of life and having reached about 50 kg in weight, it is slaughtered, gutted and boned. Each operation is done with skill and cleanliness, aiming not to damage the meat but to preserve its integrity. The meat is then flavored with expertly dosed salt, rosemary, pepper, garlic and white wine. At this point, the porchetta is sewn up, tied with string in order to maintain its compactness and impaled, so as to optimize the yield of its baking. It is roasted for about 7 hours at a temperature of about 200 ° C. It is then left to cool and served cold.

Porchetta is easily available at any delicatessen or retail producer in the Treviso area, as well as at the various stalls that contribute to animating festivals or events.

Porchetta is a food that is well suited to accompany banquets and parties, as well as a quick snack with bread and a glass of wine. 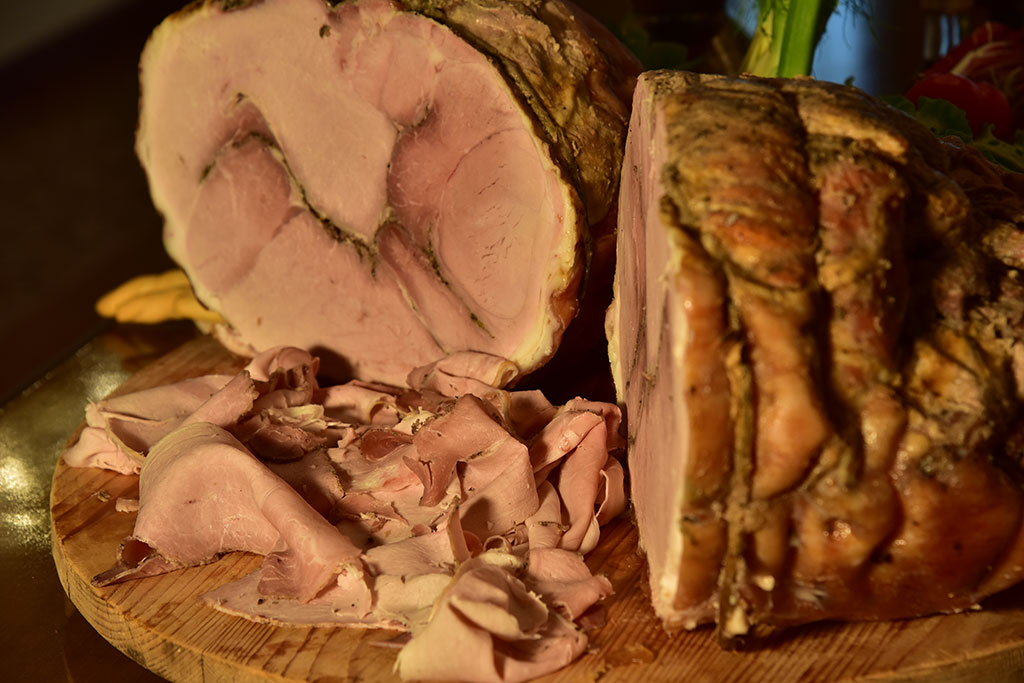