he May promises to be a month full of shows for Padua, which will see the return of major international concerts at the Kioene Arena to the busy schedule of the Gran Teatro Geox after the long stop due to the health emergency.

The concerts of Pat Metheny, Kraftwerk, Van Der Graaf Generator, Samuele Bersani, The Beatbox, Michele Bravi, Mario Biondi, Mahmood and Dead Can Dance are expected at the Gran Teatro Geox, in addition to the comedy show of the trio Marco and Pippo. At the Kioene Arena instead comes the music of One Republic, 5 Seconds of Summer, Dream Theater and James Blunt.

Tuesday 3rd May
The month will open under the banner of great international music with One Republic, in concert on Tuesday 3 May. The band led by Ryan Tedder will make a stop in Padua to finally bring live his fifth studio album, Human, which was released last year and led to over 5 billion streams of One Republic’s music on Spotify, confirming its overwhelming popularity. Kioene Arena, starts at 9.30pm.

Friday 6 May
It continues on Friday 6 May with Pat Metheny, an internationally renowned guitarist who pushed the jazz guitar beyond all limits, creating a sound and a compositional and executive style that is unique in the history of the instrument. In Padua he brings his new Side Eye project, which came after a fantastic career that allowed him to collect 3 gold records and 20 Grammy Awards in forty years. Gran Teatro Geox, starts at 9.30pm.

Saturday 7 May
Saturday 7 May the show doubles: the Kraftwerk at the Gran Teatro Geox and the 5 Seconds of Summer at the Kioene Arena take the stage.

Kraftwerk was born in 1970 from the union of Ralf Hütter and Florian Schneider. Always innovators, they are recognized worldwide for their revolutionary electronic music, their soundscapes and original experiments with robotics and other technologies. In fact, they arrive in Padua with an incredible 3-D multimedia show that blends music and art together. Gran Teatro Geox, starts at 9.30pm.
5 Seconds of Summer, nominated by Rolling Stone as “one of the best new rock bands”, is the only band (non vocal group) in history to have placed their first 2 albums at number 1 on the Billboard 200 charts. L debut album “5SOS” has sold over 3 million copies worldwide, with 1.5 million albums and over 4.5 million singles sold in the United States alone. Kioene Arena, starts at 9.30pm.

Sunday 8 May
Also on Sunday 8 May there is plenty of choice: Van Der Graaf Generator live at the Gran Teatro Geox and Dream Theater at the Kioene Arena.
Van Der Graaf are among the milestones of progressive music, with over fifty years of career behind them: after nine years of absence from the peninsula, they embrace Italy again, stopping off in Padua. Gran Teatro Geox, starts at 9.30pm.

Dream Theater are the largest and most influential progressive metal band in the world, fresh from winning the prestigious Grammy Award in April for best metal performance with the single “The Alien”. As a further reason of interest, there will be a special guest to open the concert: to accompany the titans of progressive metal will be the Canadian Devin Townsend. Kioene Arena, start 20.30.

Friday 13 and Saturday 14 May
On Friday 13 and Saturday 14 May the overwhelming comedy of Marco and Pippo returns, “the only duo that is a trio”. After the extraordinary success with the sold out of the two dates at the Gran Teatro Geox last December, they are back with a show full of new comic ideas, jokes and gags. Gran Teatro Geox, starts at 9.15 pm both evenings.

Monday 16th May
Monday, May 16, space will then be given to the Italian singer-songwriter with Samuele Bersani, who brings his latest effort Cinema Samuele on tour, Best Album ever of 2020 for the Tenco Award. For Bersani this is the fifth Targa Tenco after the one for “The special horoscope” awarded in 2000 as Best Album, the double in 2004 both for Best Song with “Bad”, and for Best Album with “Caramella Smog”, and in 2015 for “The stories you don’t know” written and sung together with Gino Pacifico, guided by Best Song of the Year.
Gran Teatro Geox, starts at 9pm.

Thursday 19th May
Thursday 19 May will be a special evening for Beatles fans: their timeless successes will in fact be brought back to the stage by The Beatbox, the most popular Fab4 tribute band in Europe. The exhibition will be enriched by the exceptional storytelling of Carlo Massarini, together with which The Beatbox have given life to the new show Magical Mistery Story – The magical story of the Beatles, which they will bring to Padua. Gran Teatro Geox, starts at 9pm.

Friday 20 May
On Friday 20 May to enchant the Paduan public will be the talent of Michele Bravi, competing in the last edition of the Sanremo Festival with the song L’inverno dei fiori, five years after his debut on the stage of Michele’s Ariston

Saturday 21st May
Mario Biondi arrives in Padua on Saturday 21st May, on his return from the international tour that has seen him on stages in Spain, United Kingdom, Switzerland and Austria in recent weeks. Fresh off the release of his latest album Romantic on March 5th, he can’t wait to embrace the Italian public again and his feeling is mutual. Gran Teatro Geox, starts at 9.15 pm.

Sunday 22nd May
Sunday 22 May will be the turn of James Blunt, an English artist with a touching story behind him. A former British army officer, he remains deeply marked by the war experience and on the battlefield, with the guitar in his arms, he composes songs to tell the pain and devastation that his eyes have encountered. He has been a full-time musician since 2002, kicking off a career of enormous success with over 23 million records sold. Kioene Arena, starts at: 9.15pm.

Wednesday 25 May
On Wednesday 25 May Mahmood will be the protagonist, winner of the 72nd edition of the Sanremo Festival paired with Blanco with Broglie and of the 69th edition as a soloist with Soldi. An unstoppable success now that of Mahmood, which to date has a total of 16 platinum records, 8 gold records and over 400 million streaming. And that he will arrive in Padua after the experience of the upcoming Eurovision Song Contest, the festival that last year kicked off the unstoppable rise of the Maneskin. Gran Teatro Geox, starts at 9.15 pm.

Friday 27 and Saturday 28 May
On Friday 27 and Saturday 28 May Dead Can Dance will close the rich programming of the month. Dead Can Dance is the most important and influential project of that “gothic” and “atmospheric” current that was born as an offshoot of the darkwave from the early Eighties: no other group, in this field, has been able to achieve such far-reaching results . The Anglo-Australian duo arrives in Padua to bring their new album Dionysus on tour. Gran Teatro Geox, starts at 9.30 pm both evenings.

Tickets
Tickets for the May shows are available on traditional circuits and online on Ticketmaster, Ticketone and Fastickets.

From May 1, the obligation to exhibit the Green Pass to access live shows is no longer valid, however, it is still necessary to wear an Ffp2 mask. Security check, title verification and access operations require you to arrive well in advance: it is therefore advisable to show up at the location at least 90 minutes before the gates open. There are comfortable dining areas in both locations. Please note that access with backpacks and bags is prohibited to the Kione Arena.

Gran Teatro Geox
The Gran Teatro Geox in Padua is one of the most important theaters in Italy and in Europe and is located in via Giuseppe Tassinari, 1. Created to host different types of events, from great musicals to rock, from private events to classical music, it is proposed as an innovative space, where the quality of service is added to the program, always very selected. Since its inauguration in 2009, the Gran Teatro Geox has hosted the major Italian and foreign artists and has come to be the first Italian theater in terms of number of shows per year and average spectators, a surprising figure also in consideration of the fact that it is located in a big city. 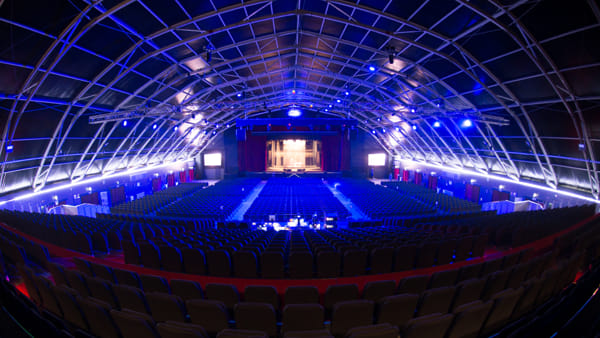