The 5 excellences, the famous Amaro 33 allo Zenzero, the new grappa Grappa Riserva 3YS and the Bianca Da Prosecco without forgetting the Prosecco Superiore D.O.C.G. Don Giovanni Da Ponte and the splendid customizable gift boxes: the shop has been set up with all the products of the old distillery that awaits its admirers every Saturday, from 10.30 to 12.30 and from 15.30 to 19.30.

For information and contacts:

Being distillers by vocation

We must look for the origin of the famous lineage of distillers in the Jewish community of Ceneda, now Vittorio Veneto, probably in the figure of a cordovaniere (leather-shoemaker), a Geremia Da Conegliano who remained a widower, in order to remarry with a “gentile” (Christian ), he was baptized together with his three children.
So on 29 August 1763 the Bishop of Ceneda, Lorenzo Da Ponte, with great solemnity, baptized him giving him the name of Gasparo Da Ponte and his three sons the Christian names of Lorenzo, Girolamo and Luigi, assigning them to the priesthood and assuming the burden to keep them studying at the episcopal seminary. The young Lorenzo Da Ponte, who became Abbot and already inclined to poetry since childhood, became Mozart’s librettist writing “The Marriage of Figaro” (1786), “Don Giovanni” (1787) and “Cosi fan tutti” (1790) . With an eclectic and very active mind, during his stay in Vittorio Veneto, Lorenzo helped his father to open a grocery store selling spirits. But the passion for distillation also followed him in the U.S.A. where, in Philadelphia, he created a distillery with the help of a Venetian oenologist, and subsequently brought the knowledge of the art of distillation to his students at Columbia University.
Gasparo Da Ponte, in second marriage, had among his progeny Andrea Da Ponte, who would become an expert distiller in Conegliano by founding the distillery of the same name in 1892 and Matteo Da Ponte who joined him a few years later in the art of distillation. The interest in the study led Matteo to elaborate the famous “Metodo Da Ponte®” and codified it by publishing in 1896, with the publisher Francesco Cagnani, the “Manual of the distillation of pomace, wine and fermented fruit, manufacture of Cognac, extraction of the cream of tartar and use of all the residues of the distillation “.
The reins of the Da Ponte Distillery passed in 1946 to the grandson of Bruna Da Ponte married to Fabris, PierLiberale, who in the 1960s created the “Grappa di Prosecco”, an innovative distillate, a “status symbol”, present in the living rooms of Europe. A Grappa aged for a long time in Limousin oak barriques, produced using only the pomace from Prosecco, the wine par excellence of the Conegliano hills. Thus was born the famous “Vecchia Grappa di Prosecco®”!
In order to improve the distillate and bring it to the highest levels, in 1979 he moved the Distillery to the Corbanese di Tarzo basin, an area rich in icy waters which during distillation favor the condensation of aromas. Since then, the company has continued to confirm itself at the forefront of the national and international distillation industry.
Today, as in the past, Distilleria Andrea Da Ponte S.p.A., also a leader in the German market, offers the knowledge and appreciation of Grappa di Prosecco and stands out in the panorama of distillers for combining technology, history and novelty. A refined example of this is “UNICA Da Ponte® 10 vintages”, which with its elegance and extreme refinement of flavors and aromas brings in every drop the most delicate aromas of the grapes that give life to Prosecco Superiore D.O.C.G. of Conegliano and Valdobbiadene. The sensation it gives is enveloping and velvety to the taste, so fragrant and slightly fruity, for these reasons the Grappa da Prosecco is called “UNICA Da Ponte®”. 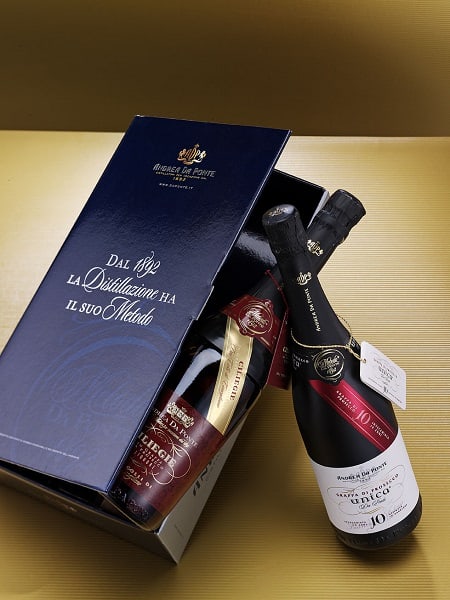