It is a short-aged cheese, soft or semi-hard, white or slightly yellow with small holes. The organoleptic characteristics, which are accentuated with aging, are the flavor and an intense and complex aroma.

Cylindrical shape, diameter 30-50 cm, convex sides 7-12 cm high, flat faces, barely perceptible rind, striped due to the traditional custom of placing the curd just separated from the whey in wicker baskets for draining and currently in striped molds .
In the fresh product, to be consumed within 15 – 20 days of cheese making, the paste appears soft, crumbly, white, with small scattered holes, the taste is salty, with herbaceous notes, the aroma is intense, characteristic, slightly milky.
In the seasoned product, with maturation from 30 to 90 days, the paste acquires a slightly straw-yellow color and tends to freeze, especially in the under-rind, the flavor and aroma are markedly highlighted, until they become very decisive, with strongly aromatic accents.

It is consumed in combination with light white wines. It is a cheese for the end of the table but not only: as is the custom of the herdsmen, in fact, it is the typical cacio-food, which was consumed starting from breakfast in the morning until the evening meal accompanied by polenta, boiled potatoes or homemade bread. .

Method of processing, conservation and seasoning

Once the Morlacco was produced with totally skimmed milk since the main product of Malga was butter, marketed downstream and direct source of income. Morlacco could therefore be considered a poor “by-product”, often in fact it was referred to as the “Formajo dei Puareti”.
Currently the evening milk is skimmed by surfacing in a special room in Malga, called “Cason de l’Aria”, characterized by large openings to allow the passage of fresh night air and keep the milk emerging at the optimal temperature for the separation of fat. After skimming, it is added to that of the morning, it is mixed and heated for the addition of rennet; the curd, left to rest for 20 – 30 minutes, is cut, left to settle and separated by means of cloths. Once it was placed in wicker baskets to allow the whey to be drained, currently no longer in use, replaced by perforated molds where the curd is left for 24 hours for purging. We proceed to molding, dry salting and maturation for at least 6 days in a dedicated room, called “Casarin”. The weight of the wheels can vary from 5 to 10 kg, the diameter from 30 to 50 cm, the side, always convex, from 7 to 12 cm.
Traditionally, Morlacco cheese was consumed 10-15 days after production. Today A.PRO.LA.V., Regional Association of Veneto Milk Producers, after having conducted a series of maturing tests for some time, brings to maturation, collaborating with the Malghesi, from 30 and up to 90 days and sometimes more, some chosen forms of Morlacco, placed in underground deposits and tunnels dating back to the First World War, bitterly fought on the Grappa Massif. The forms are not washed, but only dried and turned around every day. The microbial composition, unique for each cave, gives the crust the characteristic colors, which can range from ivory-white to orange with pink hues. The microclimatic characteristics of the caves allow the start of a proteolysis process of the pasta, which leads it to freeze, turning into a cream, from the crust towards the center of the wheel. The results are of extreme organoleptic value.

Morlacco is a traditional product of the Grappa pastures produced from June to September. Shepherds and woodcutters, who settled on Grappa during the period of the Republic of Venice, used to make a soft, lean, raw cow’s milk cheese that took its name from their homeland: the Balkan Morlacchia. Ancient literary evidence indicates, at the end of 1400, in a Macheronic poem by the friar Matteo Fossa, a “Morlaco” cheese. As such, there are later news of it in the mid-19th century, reported in the “Economic-Social Monograph Report of the territories falling within the 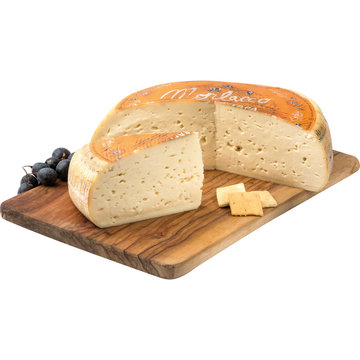