If you are still looking for the flavor of cheese ask for Montasio. It is a genuine cheese, still made as it used to be. Guaranteed by the European Union, it is one of the few PDO products, with a Protected Designation of Origin. Montasio meets some specific requirements. The production area is strictly identified in Friuli, in eastern Veneto in the provinces of Belluno and Treviso, and in some areas of the provinces of Padua and Venice.

The raw material, which is fresh milk, and the control of quality and progressive transformations. And from which the three maturations in fresco, medium and seasoned are also obtained.
The technology: a soft technology, which favors the slow formation of the product and helps to form the nutritional characteristics.
The marking, affixed to the production by the Protection Consortium, which guarantees the identity, origin and compliance with the characteristics of the specifications. These factors, all together, safeguard the origin and typicality of Montasio cheese.

Montasio is a hard, cooked fat cheese made exclusively with cow’s milk. It is dry salted or in light brine with dry completion. It is used at the table when the seasoning has reached two months and not exceeded five, or grated when the seasoning has reached at least twelve months. Ripe, it has the following characteristics: cylindrical shape, with straight or almost straight low sides, with flat or slightly convex faces; average weight of a wheel: from 5 to 9 kg, with variations, more or less, in relation to the technical conditions of production; dimensions: height 6-10 cm; diameter 30-40 cm, with variations, more or less, for both characteristics, in relation to the technical conditions of production; rind: smooth, regular, elastic; paste: for the table cheese, compact, with slight holes, of a natural color slightly straw yellow; for the grated cheese, crumbly, straw-colored, with few and very small eyes; characteristic aroma and spicy and pleasant flavor; fat on dry matter: minimum 40%.

Montasio can be tasted fresh (after a period ranging from sixty to one hundred and twenty days of maturation), semi-matured (from five to ten months of maturation) or old (more than twelve months of maturation). The flavor changes as the cheese ages. Thus, according to personal tastes, the preferred degree of ripeness can be chosen. From the milk taste of the “younger” forms, it gradually passes to a more spicy flavor. At the same time, the Montasio, from soft, becomes crumbly.

Montasio cheese produced with salt, milk and rennet, has a smooth, regular and elastic rind, the paste is compact with slight holes, straw yellow in color for the table cheese, crumbly straw-colored paste with small holes for the grating cheese .

The taste is delicate for the table cheese and savory for the grating one. The weight is 6-7 kg, height of 8 cm at production and diameter of 35 cm. Fat must be at least 40% of dry matter.

Montasio cheese takes its name from the Montasio massif, in Friuli. In its pastures it was produced in ancient times – the first sure news dates back to 1700 – with unique characteristics, thanks to the lucky combination of three fundamental and very particular factors: hay, milk and the air of those mountains.
Today this production has spread in the Friuli plain, in the valleys and hills of the Belluno and Treviso areas, in the Venetian plain between the Piave and the Brenta, rigorously preserving the original production characteristics.

Montasio cheese has different characteristics, depending on the seasoning. The flavor, from soft and delicate when fresh, gradually becomes more decisive and aromatic. The paste, from compact white with a characteristic homogeneous holes and a smooth and elastic crust, becomes grainy and crumbly with the passing of the months with a dry and darker crust. It is a cheese that is always in shape, at any age: good fresh, aged for two months, good mezzano, aged for five to ten months, good aged, after ten months.
In perfect shapes, neither too big nor too small, suitable for both family and restaurant tables. And it is good, indeed excellent, even for all ages, and thanks to its digestibility it is particularly suitable for children and the elderly.

Seasoning: from a minimum of 2 months to 24 months and beyond
Nutritional values: depending on the seasoning, Montasio cheese provides 360 to 420 Kcal / 100 g of product
Appearance: 8 cm
diameter: 30 – 35 cm
shape: cylindrical

The Consortium for the Protection of Montasio Cheese

The Consortium for the Protection of Montasio Cheese was established on November 20, 1984 with the aim of defending and protecting the production and trade of Montasio cheese, the use of its name, and to safeguard its typicality and peculiar characteristics.
The Consortium is a voluntary consortium of Montasio cheese producers and maturers.
Montasio cheese obtained on 10 March 1986, by decree of the President of the Republic, the recognition of the Designation of Origin.
It also received the special D.O.P. qualification from the European Union on 12 June 1996, a product with a Protected Designation of Origin (EC Regulation No. 1107).
The Consortium’s activity takes place both at the institutional level (supervision of production and trade) and at the promotional enhancement of production.

Producers in the Province of Treviso 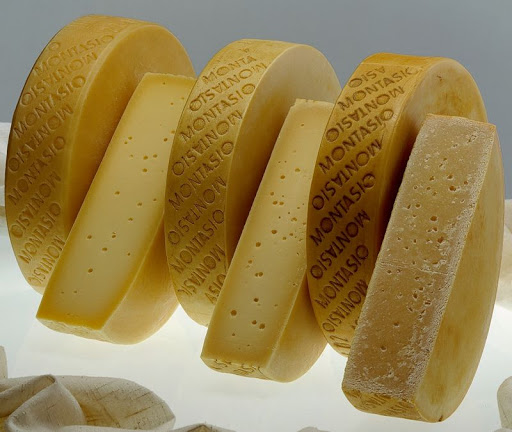