The chestnut is the fruit of the chestnut tree (Castanea sativa), a long-lived tree, on average 15 to 20 meters high, which belongs to the Fagaceae family. Chestnut is native to southern Europe, North Africa and western Asia. It is also present on the Atlantic coasts of Morocco, on the shores of the Caspian Sea and in southern England.

The chestnut loves deep, light, permeable soils, rich in nutritional elements, with a basically acidic pH, with little or no limestone. It does not tolerate heavy and poorly drained soils. It is a heliophilic plant, it loves temperate climates, while enduring even very intense winter colds.

There are two main varieties of this fruit on our market:

The story: Monfenera is the mountain on which chestnut growing in the foothills, the heart of the Pederobba chestnut area, was born and developed. A generous land particularly suitable for chestnut cultivation thanks to the temperate climatic conditions, the sunny and airy exposure, the chemical-physical composition of the soil, essential factors for obtaining high quality chestnuts and particularly different from other types of chestnuts that are commonly found in the market. The belt of chestnut groves extends from an altitude ranging from approx. 200 m. at approx. 600 m. The area can be divided into two: a low one called “rive” which ranges from an altitude of 250 to 400 m, and a higher one called “large forest” which reaches up to 550 m. Chestnut cultivation is located in the southern belt. For several decades, the Market Exhibition held in October in Pederobba has contributed to promoting the Monfenera chestnuts and is taking on an increasingly important role in relaunching the development of chestnut growing in the pleasant hills of the Pedemontana del Grappa. Interesting information can be found on the website www.marronidelmonfenera.it

Description of the product: The brown is an ovoid-shaped fruit with a striped skin varying in color from light brown to dark brown. On the base of the fruit there is a light area called “hilum”. At the apex the chestnut narrows and the remains of the perianth and styles form the so-called “torch”. The fruit is protected by a hedgehog covered with quills inside which you can find 2 or 3 browns. The edible part of the fruit is firm, whitish on the inside and yellowish on the outside, wrapped in a thin film (episperm), it has a floury, sugary, tasty, consistent, resistant to cooking, crunchy and sweet flavor. The size is large and usually varies from 48 to 65 fruits per kg.

Production process: This particular fruit plant does not require any chemical or pesticide treatment, so the “brown” is still today one of the few absolutely genuine fruits. Harvested still today according to the old traditional methods, beaten with long cane poles, put in piles (rissare) to macerate for twenty days in the sea urchin, it is subsequently chosen and suitably packaged. The product is cleaned using a brushing machine and then it is packaged in mesh bags with a capacity of 5 kg, after the selection and elimination of small fruits through the calibration process. The chestnuts can be stored in cool and dry places or in normal cold rooms.

Availability: The ripening period of the product runs from mid-September for the earliest species to mid-November for the later ones. During that period and in any case until late December they can be found in any market of the Treviso brand.

Uses: Chestnuts are generally eaten roasted but are also excellent boiled and are widely used in pastry. It is also worth noting the particular recipe of the “Mondoi”, that is the chestnuts in broth that once replaced the traditional soup. 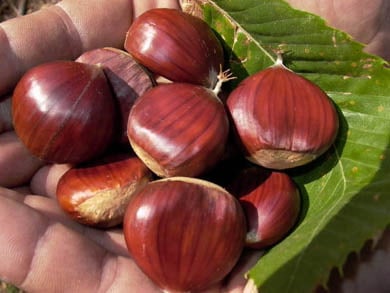