Messner Mountain Museum Dolomites: a museum in the clouds in Cortina d’Ampezzo

If you come from Cortina d’Ampezzo to the summit of Monte Rite at 2181 metres, you will be amazed to find among the bare Dolomite rocks, a museum that is called the ‘Museum in the Clouds’ and is the highest in Europe because of its extraordinary location at high altitude!

The museum is housed in an old defence fort discovered by the famous mountaineer Reinhold Messner during one of his explorations. Fascinated by the breathtaking panorama offered by this peak, he decided to breathe new life into this ruined bunker by founding a museum that would be part of his great project, the ‘Messner Mountain Museum’ dedicated to the element ‘rock’. This small fort, built in the rocks by Italian soldiers in the 19th century as a defence against the Austro-Hungarian Empire, suffered partial destruction by the Austrians who had occupied Monte Rite during the First World War. During the Second World War, the remains of the small fortress gave shelter to partisans. Once the war was over, it was left to itself, falling into ruin.

Today, thanks to the valuable work of the great mountaineer, the fortress houses an incredible exhibition that tells the story of Dolomite exploration and mountaineering. The heart of the museum is the gallery in the nave, where paintings and works from Reinhold Messner’s collection representing the Dolomites from the 19th century to the present day are displayed. In the other rooms, on the other hand, everything that was found during the various explorations of the surrounding area is preserved, including mountaineering objects from the first ascents, minerals, photos and very ancient finds such as the remains of bears from the Conturines Caverns in South Tyrol, shell fossils from 250 million years ago and other interesting finds from what were once coral reefs in a tropical sea.

But if you think you have already admired the most beautiful mountain panoramas, it means that you have not yet climbed into the glass turrets of the MMM Dolomites! In fact, three observation points, protected by daring glass domes, have been created where the fort’s old cannon emplacements used to be. From these vantage points, you can look out over all the peaks surrounding Monte Rite: Monte Schiara, Monte Agner, Cimon della Pala, Monte Civetta, Marmolada, Monte Pelmo, Tofana di Rozes, Sorapis, Antelao and the Marmarole… you will feel as if you are losing yourself in the crystal clear light of the Dolomites and a sea of white clouds! 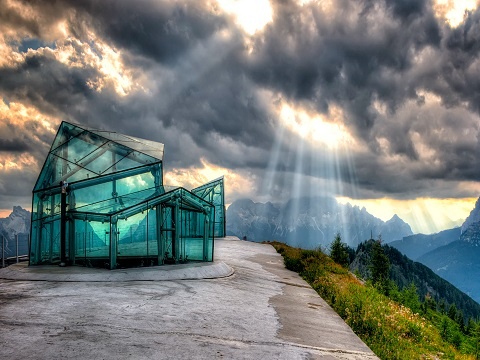