The ‘luganega trevisana’ stands out from all the other luganegas that are produced all over the Veneto for its proportions. The pork cheek and neck meat (coming exclusively from local farms) are minced, seasoned with salt and pepper and stuffed into the intestine tied and divided into four wedges. This preparation allows to use the meat close to the wound (fleshing) on ​​the pig’s neck, impregnated with blood, otherwise unusable.
Trevisana luganega can however also be packaged with meat and fat that have not come into contact with the animal’s blood and in this case their color is lighter.

It is available on the market in two versions: a ‘lean’ one suitable for cooking on the grill and a more fatty one that should be used stewed, boiled and in a pan.
In any case, it is consumed ‘fresh’ and therefore does not need either maturation or seasoning.

Tradition provides that “white luganega trevigiana from rice” is packaged with the lean part of fresh pork pancetta, finely ground and drugged; stuffed into a pig intestine, choked with binding every 8-10 cm into bobbins, called in dialect “moreli”, in a single string; drugged with salt, pepper, and the famous Treviso “dosa” in the proportion, as a rule, of 4 grams per kilo of ground beef, without adding preservatives; without seasoning.

The name “luganega” is the Venetian translation of “lucanica” of the ancient Lucanians, who made great use of it. Luganega is eaten fresh, normally cooked. In Treviso the luganeghe, already known in the Middle Ages, were traditionally packaged in two versions: the “rice” one called white and the “rosto” one called lean. The “rice” ones were very delicate and the “rosto” ones prepared for 60% with the pancetta without rind and the remainder with lean pork and the “dosa”. It was tradition to prepare, with the rice luganega, the rice soup in broth to which the sausage gave all its moods and aromas; the medieval version has now been abandoned as the custom of preparing the same risotto dish has prevailed in the restaurant, albeit in the semi-liquid version, that is ‘on the wave’, with chopped luganega. The two versions of soup should always be garnished with a sausage, boiled separately, in each bowl.

Production area
province of Treviso, even if a similar salami is produced throughout the Veneto.

The “luganega from broth or from rice” is a very particular sausage being made up, for the most part, of fine pork lard which is characterized by the typical taste given by the aromas. It is a product specifically created to season soups and risottos, giving them a typical and particular flavor. The product is well described in Maffioli’s book “La cucina trevigiana”, in which he assumes a very ancient origin, citing Giulio Tirelli “another emeritus cook”, who, in the “Discourse on quadrupedal animals, both domestic and wild”, in the chapter “Domestic pig” says among other things: «… this animal is very useful for cooking and tasty for making food and fat with its meat. I’m here […] but I’ll only talk about a kind of sausage, which I use in July and August to season soups, at the hour when the stomachs are more relaxed due to the great heat. […] When the soup or soup will be cooked, place one of these sausages in it and when it is swollen it is transformed with a knife, and so a juice will come out that will gently season the soup or suppa, and in a mess it does the same . “

They are small (4-6 cm) and low weight (about 50 g) sausages. They have a fairly light color which, however, varies according to the type of spices they contain. Taste and aroma are intense and pleasant.

To produce these sausages, pork bellies are used, without the rind, minced with a 5 mm hole mold. The dough is then flavored with 2.5% sea salt and flavored with the 0.5% dose. The latter contains various aromas: cinnamon, clove, pepper, nutmeg, mace and coriander in different and balanced proportions. After careful mixing, the dough is stuffed, with the aid of a special machine, into pig intestines and then manually tied into knots.

These particular sausages can be found directly at the producers, or in some butchers or restaurants in the Treviso area during the winter months.

The product is an excellent condiment and is used, as the name suggests, to flavor soups 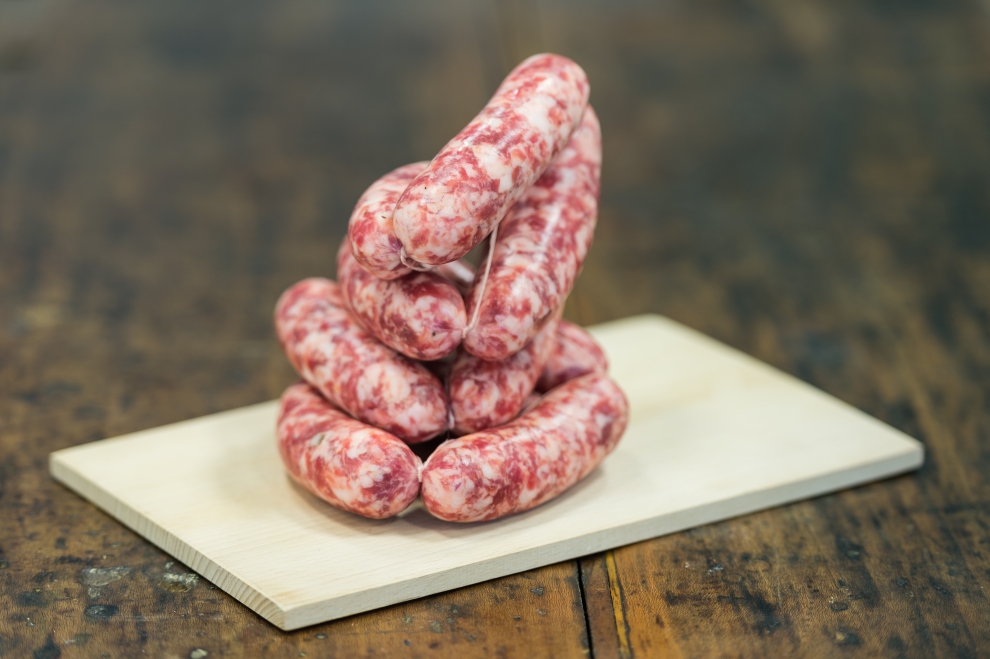