Going to the theater, listening to music or seeing a good movie can arouse emotions like tasting a soft and fragrant Grappa di Prosecco.

It is a combination of senses that the Da Ponte family have known and supported for almost 120 years, perhaps mindful of another Da Ponte, Lorenzo, the famous librettist of Mozart’s Don Giovanni, son of Gasparo, a Jewish leathermaker who converted to Catholicism for love reasons. In fact, from a son from his second marriage descends that Andrea who in 1892 founded the Andrea Da Ponte Distillery in Conegliano, now located in Corbanese di Tarzo, in the Treviso hills. Four years later, in 1896, his brother Matteo published the first “Manual of Distillation” and the publisher Hoepli did not publish the following four editions, dictating the rules for obtaining the best Grappa while maintaining the most intense aromas of the grape, since then we talk about “Metodo Da Ponte®”. “Since then, here, nothing has been done but perfecting the product until reaching, in 2011, the highest level of excellence” explains Francesco Fabris, descendant of that noble Piero Fabris from Cadore who, by marrying the daughter of the company founder, Bruna Da Ponte, gave another strong impulse to the relationship between grappa production and culture production. The Fabris, in fact, are founders and owners of the prestigious Teatro Accademia di Conegliano. In addition, Piero’s love of cinema also entered the house when in 1930 he went to see the first Italian sound film The Song of Love by Gennaro Righelli and was fascinated by it. An infatuation that has left its mark on the dynasty: his nephew Giorgio, in fact, is today an established director and producer, as well as artistic director of the Academy and owner, in Conegliano, of the Multisala Méliès. But the art has also remained inside the “factory” and in the area where Grappa is born.

“From this magical place I draw my inspiration” says Francesco Fabris, owner of Andrea Da Ponte Spa “looking to the future, keeping the same values ​​that I will teach my two children.

Time (distillation knows no hurry), nature (it is rhythmic by the generating forces), matter (it seeks the harmony of bodies) and spirit (it gives a bouquet of refined scents), are the inspiring principles of my spirits, of which the maximum expression of quality and rigor is represented by “Libera Da Ponte”, the Grappa di Prosecco distilled in 1992 by Pier Liberale, my father, in the centenary of the distillery: it is a Gran Riserva produced in a limited edition of only 4,892 bottles. I came up with the idea of ​​allowing this Grappa to age for 18 years, taken from the pomace of Prosecco, the vine par excellence of the Conegliano hills, in Limousine oak barrels. Now the cycle is complete. Complete but always in progress because Grappa is the fragrant breath of grapes and vines, because Grappa is water of life. “ 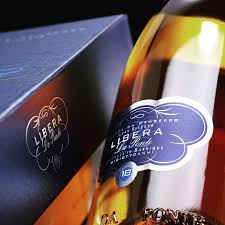