Le Manzane delivers a check for 13,780 euros for research on ALS

The proceeds from the September charity event were donated to the non-profit organization Revert.

The solidarity harvest does not stop: announced the 2020 edition for the Covid departments of Treviso and a new partnership with Oedipus Island in Venice.

Another battle won thanks to solidarity. A check for 13,780 euros was delivered this morning to the non-profit organization Revert for research on ALS, thanks to a project developed in collaboration with the social enterprise Edipo Re. And Edipo Re, the historic boat that was the scene of the extraordinary crossings of Pier Paolo Pasolini and Maria Callas, hosted the delivery of the proceeds of the 8th “Solidarity harvest – Celebration and charity in the Land of Prosecco Superiore” last 8 September at the Le Manzane winery in San Pietro di Feletto (TV).

“Today we are writing the last page of this beautiful project – explained Ernesto Balbinot and his wife Silvana Ceschin, owners of the Le Manzane company – we are happy to contribute in our small way to finance research on brain stem cells to stem the damage caused by neurodegenerative diseases. It is our duty to thank all the sponsors, partners, the many volunteers and the hundreds of people who every year, at the end of the summer, participate with us in the charity event that will reach its ninth edition this year . The solidarity harvest, in fact, does not stop and in September the proceeds from the grape harvest festival will be donated to the Covid departments of Ulss 2 Marca Trevigiana “.

“8 years of solidarity to make resources available for those living in difficult situations. We have a company that gives back to the territory. I believe that this must be acknowledged by the Le Manzane winery, “said Loris Dalto, Deputy Mayor of San Pietro di Feletto, present at the time of delivery of the check.

“The proceeds from the solidarity harvest – said Angelo Righetti, member of the board of directors of Revert – will go to various projects of the International Social Economy Network. The most relevant is what Revert is carrying out for research on neurodegenerative diseases such as ALS and experimentation directly on patients. In a network system and in a region, such as Veneto, which can boast a very high percentage of volunteers out of the total population, initiatives like this can make a difference especially for a non-profit organization like ours that is experiencing many difficulties in receiving public funding. The donation of the solidarity harvest represents an important step for us to carry out larger projects “.

Meanwhile Sibylle Righetti, president of Edipo Re, announced the latest news: a partnership that will bring the solidarity harvest every year from the Prosecco Superiore hills of Conegliano Valdobbiadene to the Oedipus Island in Venice, virtually uniting two UNESCO sites. “The contribution we have decided to make as a social enterprise – he explained – is to serve, on board the Oedipus Re, also the solidarity prosecco, the result of the great grape harvest festival organized by the Le Manzane estate, with our products to ethical kilometer. An idea that started last year when we began to convey the message of the solidarity harvest during the Social Food Festival, a tasting space in the heart of the Venice Film Festival, and which we will repeat every year by supporting the charity initiative in this way “.

The Revert Onlus Association was founded in 2003 to finance, promote and encourage research on brain stem cells with the aim of finding a cure for neurodegenerative diseases. At the moment the clinical trial on patients suffering from amyotrophic lateral sclerosis, conducted by prof. Angelo Vescovi, is one of the most advanced in the international scientific panorama and represents a real possibility of finding a cure for this disease that affects 7,000 people in Italy with 1,500 new cases a year.

www.lemanzane.com
Further information on 15 JULY 2020 ARTICLES | RELEASES Le Manzane delivers a check for 13,780 euros for research on ALS. The proceeds from the September charity event have been donated to the non-profit organization Revert. 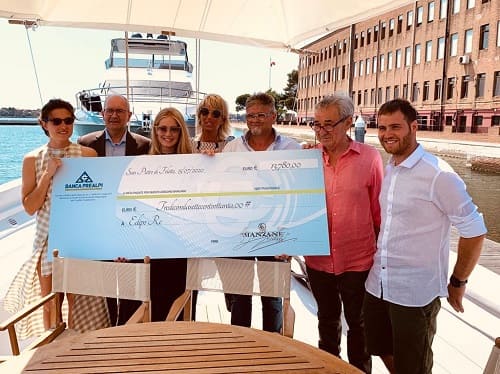