Latteria Perenzin presents three new drunkards: a tribute to Luigi Manzoni
50 years after the death of the illustrious scientist, the dairy of S. Pietro di Feletto creates 3 cheeses with the marc of the Incroci Manzoni in order to enhance the work of the oenologist and the traditional techniques of dairy art of the historic dairy of Bagnolo.

La Latteria Perenzin pays homage to Luigi Manzoni: presented, as a preview on Tuesday evening, three new dairy creations made on the occasion of the 50th anniversary of the death of the illustrious scientist: organic cheese refined with Manzoni Bianco, buffalo cheese refined with Manzoni Moscato and cheese aged in Manzoni Rosso.
The “Manzoni Project” blends the history and work of oenologist Luigi Manzoni with the traditional techniques of the dairy art of intoxication, developed by the San Pietro di Feletto dairy starting from Valentino Angelo Perenzin who lived in the same period.

“It is an honor for us – declared the owner Emanuela Perenzin – to dedicate this exclusive line of drunk cheeses to Luigi Manzoni 50 years after his death and to Valentino Angelo Perenzin, both protagonists in two areas that have always traveled parallel: wine and cheese. The quality of our milk, wine and grapes used to refine our cheeses, the slow aging process which is also the secret of our dairy, the uniqueness of our microflora that dates back to the 1950s, the scent fragrant but not invasive, suitable for both traditional and contemporary cuisine, are the characteristics of the 3 cheeses made by Luca Longo, our dairyman, and by Matteo Piccoli, responsible for the drunkenness ».

Presenting the evening Gianpiero Rorato who moderated the meeting and introduced the interventions of the speakers and the authorities: Emanuela Perenzin, Matteo Piccoli, Claudio Toppan, councilor of the Municipality of Conegliano, Maria Grazia Morgan, dean of the Cerletti Institute of Conegliano, three students of the oenological school who exhibited the characteristics of the wines and Ivo Nardi, president of the Unindustria Treviso Wine Group. The event ended with the tasting of Incroci Manzoni made available by the manufacturers and the new drunk cheeses. Thanks for the supply of marc and wine to: Case Paolin, Casa Roma, Conte Collalto Farm and Nadal Valerio Farm; for wine tasting: Sara Meneguz, Ca ‘di Rajo, Le Manzane, Molon Luigino, Perlage, Conte Collalto Farm and Casa Roma.

Perenzin Dairy was born in 1898 from an idea of ​​Domenico Perenzin; after more than a century of life, today sees the fourth generation at the helm of the company with Emanuela Perenzin and the collaboration of the sons Erika and Matteo who represent the fifth generation. It has always worked with cow’s milk, followed by goat’s milk (since 1999) and buffalo’s milk (since 2010). It produces traditional and organic cheeses, award-winning in both Italian and international competitions. The company distributes throughout Italy and exports to Europe, the USA, Canada and Australia. Some data: 1.8 million liters of milk processed every year; 32 thousand forms of cheese produced every year; production: goat milk 54%, organic milk 61%, exported product 20%; turnover 2017: 3.2 million euros. 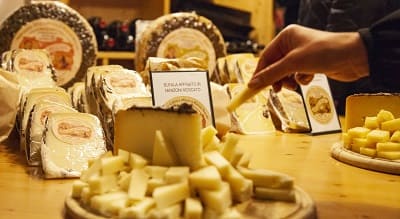