Giro d’Italia Under 23, Adriatica Ionica Race and Solighetto International for Juniors will pass, over eight days, on the famous climb of San Pietro di Feletto. On June 27 a Treviso delegation will be present at the Tour de France to renew the twinning with the Walls of Brittany and Grammont

San Pietro di Feletto (TV), 10 June 2021 – Great cycling climbs the Muro di Ca ‘del Poggio. After the presentation of the Conversus project (www.conversus.it), the precious glass in Murano glass designed by Roberto Bertazzon and made by Carlo Moretti, delivered to the winner of the Giro d’Italia Sacile-Cortina stage Egan Bernal, other major events the famous ascent of San Pietro di Feletto will be the protagonist in June.

It begins on 12 June with the Giro d’Italia Under 23, on the occasion of which the Muro di Ca ‘del Poggio, as happened in 2018 with the final time trial in Real Time, will be one of the most anticipated moments of the last stage, in departure from San Vito al Tagliamento (PN) with arrival in Castelfranco (TV).

There is Prosecco. And there is the sea. Ca ‘del Poggio Ristorante & Resort in San Pietro di Feletto, in the Treviso area, perfectly combines the two souls of the Stocco family. The seafaring one, which led Fortunato and his wife Maria Stella to face a qualified restaurant experience in Bibione, before moving to San Pietro di Feletto. And the hilly one, interpreted by the sons Alberto and Marco, who, with the help of their parents, have made the family tradition their own, revisiting it with a touch of modernity and elegance.

Ca ‘del Poggio Ristorante & Resort has been open in San Pietro di Feletto, along the Strada del Prosecco Superiore Docg, since October 18, 1994, and has since met the growing favor of a refined and demanding clientele. If the view of the Prosecco hills that can be admired from the rooms of the Relais Ca ‘del Poggio restaurant goes straight to the heart, the palate of the Stocco family’s guests is delighted by a seafood cuisine which, thanks to the creativity of the chefs Marco Stocco and Vincenzo Vairo, it has now attracted the attention of the most severe gourmets.

Very well known in the sports environment – in via dei Pascoli, the only climb certified by the Italian Cycling Federation, renamed Muro di Ca ‘del Poggio and twinned with the Wall of Grammont and the Mûr-de-Bretagne, the 2009, 2013 editions have passed. 2014, 2017 and 2020 of the Giro d’Italia, the Italian Professional Championship of 2010 and the 2018 edition of the Giro d’Italia Under 23 – the Relais Ca ‘del Poggio restaurant has 80 seats inserted in an elegant and at the same time family, where Alberto Stocco and his collaborators make guests feel at home.

Since May 2013, the tourist offer of Ca ‘del Poggio has been enriched by the Hotel Villa del Poggio, a structure equipped with every comfort (and with a wonderful panoramic terrace) that integrates perfectly with the hospitality offered by the restaurant, transforming this corner of the Marca Trevigiana – 60 km from Venice – in a kind of paradise for customers who love to immerse themselves in the relaxed and elegant atmosphere of the Prosecco hills. Nearby there are golf and horse riding courses, as well as nature trails to explore on foot or with the mountain bikes provided by the hotel, for a holiday dedicated to wellness and relaxation.

Nearby there is also the Path of Pope John XXIII, a path of meditation, peace and spirituality dedicated to the memory of the “Good Pope”, who, when he was still Patriarch of Venice, loved to retire to the hills of San Pietro di Feletto to rest and restore your spirit.

The researches of Cardinal Loris Francesco Capovilla, historical personal secretary of Angelo Giuseppe Roncalli since the Venetian years, and of Don Nilo Faldon, a distinguished local historian, combined with the testimony of the local people, allowed to define the places touched by the usual journey of future Saint John XXIII during his stays in San Pietro di Feletto, where there is also a millenary parish church visited every year by thousands of faithful. 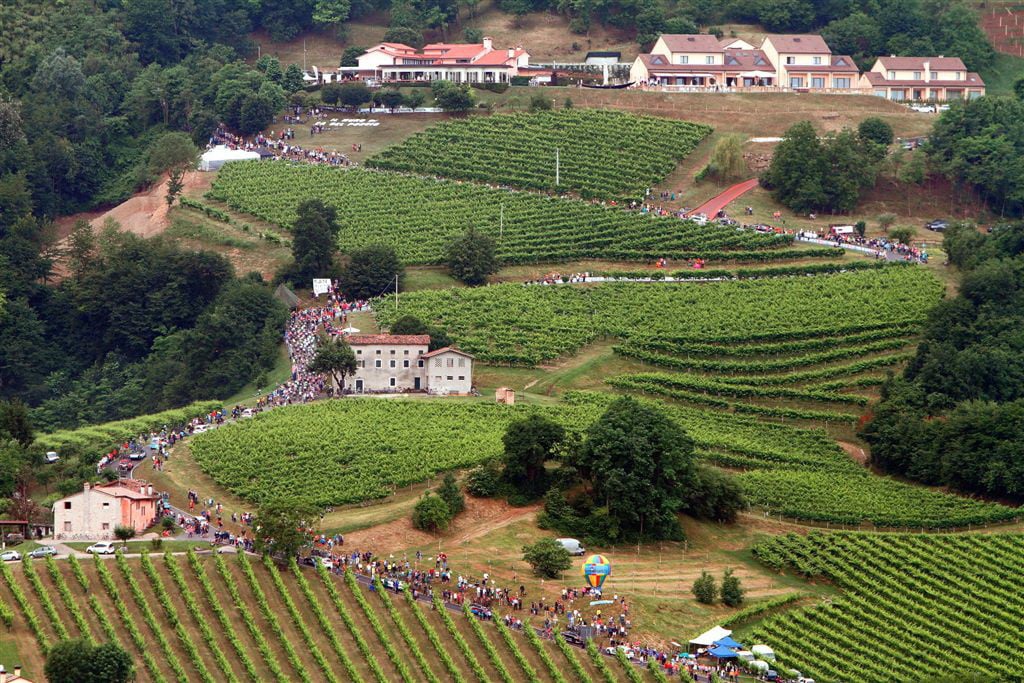