Itinerary: from Vittorio Veneto along the highland route

FEBRUARY 8, 2013
ARTICLES
Itinerary: from Vittorio Veneto along the highland route
A short but full itinerary of splendid alpine scenery leads from Vittorio Veneto, in the province of Treviso, to the Bosco del Cansiglio, and then turns towards the village of Pieve d’Alpago and descends towards Vittorio Veneto, skirting the shores of Lake Santa Croce. In addition to being the scene of one of the most famous battles of the First World War, Vittorio Veneto is a town rich in medieval and Renaissance testimonies, formed by the merger of the ancient communities of Serravalle and Ceneda which, joining together, took the name of Vittorio Emanuele II. The dominant position on the Treviso plain, in the narrow gorge that guarantees access to Cadore, and the presence of the Meschio river contribute to the town’s scenic attractions. Along the river you can see the mills, paper mills, foundries and sawmills on which the local economy was founded for many centuries. The beautiful eighteenth-century Cathedral of Serravalle houses a “Madonna with Child” by Titian and other works of great value. The Loggia designed by Jacopo Sansovino is also very refined, inserted in the ancient municipal building of Ceneda. Also worth a visit are the Castle of San Martino, now a bishopric, and the churches of Santa Giustina and Santa Augusta. The latter can be reached via a long staircase that ends with a belvedere overlooking the rooftops of the city center. Evocative Gothic and Renaissance residences overlook via Martiri della Libertà. Leaving Vittorio Veneto, take the provincial road 422, in the direction of Mezzavilla, and you will almost immediately encounter a detour to the Caglieron Caves, a complex consisting of a natural cave flanked by several quarries. The natural cavity was dug by the Caron stream, which still runs through it, creating a series of waterfalls and potholes. A path equipped with wooden walkways runs along the course of the stream throughout the caves. The sandstone quarries, dating back to the sixteenth century, provided material for private construction. Back in Mezzavilla, take the panoramic road that winds up to 1120 meters of the Crosetta, a splendid panoramic location overlooking the plain of the Livenza river. From here begins the slow and very pleasant descent into the Bosco del Cansiglio, the vast state-owned forest made up of larch, beech and spruce and white firs, already famous at the time of the Republic of Venice, which drew the timber for its ships from these stems.

The green expanse covers the characteristic natural basin of the Cansiglio plateau, straddling the provinces of Treviso, Belluno and Pordenone. The karst nature of the soil means that the abundant rainfall does not feed streams but enrich the subsoil. From time to time, the forest with its dense undergrowth and its fauna of roe deer, fallow deer and red deer gives way to the characteristic alpine pastures. The entire territory of the plateau is protected by nature reserves. After passing the village of Spert, the road bends west, touching the villages of Tambre and Lavina, and entering the Alpago plateau. At the center of this verdant setting, at the foot of Mount Dolada, is the village of Pieve d’Alpago, a well-known holiday resort that was inhabited, however, already in prehistoric times. Through a series of ups and downs you reach the course of the Piave near Ponte nelle Alpi. Here you have to turn left, taking the Statale 51, which winds between the slopes of Nevegal and Lake Santa Croce. A dense network of trails that can be traveled on foot or by bike, as well as excellent ski lifts, make Nevegal an attractive destination in all seasons. From the top of the “Colle dei Bellunesi”, the view sweeps over the entire Dolomite circle and the Valbelluna. On the left you run along Lake Santa Croce, a characteristic heart-shaped mirror of water, constantly rippled by a breeze that originates from the heating of the Alpago mountains and the consequent thinning of the air below. From the first days of spring, the surface of the lake appears dotted with the sails of surfers and other small boats. But the largest natural basin included in the Veneto also has considerable landscape and naturalistic importance, underlined by the establishment of an oasis that protects the flora and fauna of the area. Many migratory birds stop by the lake in spring and autumn. A nice dirt path can be covered on foot, from the bridge over the Tesa, along the right bank to the signposted start of the nature trail. Some detours allow you to observe the reeds and riparian vegetation, or to reach the beach on the northern shore. Back in the car, and after passing the Sella di Fadalto (the best observation point on the lake), you will skirt the Dead and San

Floriano. The last stretch is more tortuous and descends rapidly towards the Serravalle strait, through which you return to Vittorio Veneto. 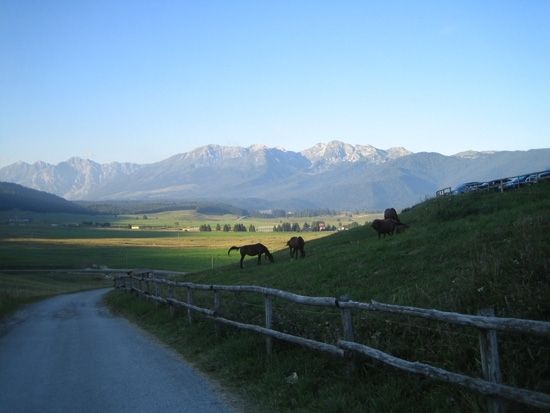