According to the Minister for Relations with Parliament, politics must “bring economic resources, first of all, but also a vision towards the future in order to finally be able to cure these diseases”.

The General Assembly of the Retina Veneto Social Promotion Association was held on Saturday 9 April at Villa Condulmer in Mogliano Veneto. To tell the president Antonio Ongaro: “An Association that gathers many people who are losing their sight due to this hereditary disease called retinitis pigmentosa. We hope, thanks to the research, science and contributions that are coming, to have fewer people with this vision impairment, this inherited genetic disease in the near future ”.

Among the many political interventions and medical relations, also that of the Minister for Relations with Parliament, Federico D ‘Incà: “I thank Antonio for all the work he has done as president of Retina Veneto. I must say that it is an important meeting. I also thank the 1,500 members and the whole Camposampiero structure for the great work done in recent years, which has allowed us to study one of the diseases that severely disables the people who are affected. I believe that today we have all the skills and the technology to be able to look towards the future, intervene immediately also through gene therapies and therefore give a new future to people who find themselves with these difficulties. Everything lies in cooperating and continuing to work together between those who manage associations in the area, those within the hospitals who provide an exceptional service and those who in politics must look at the problems trying to bring economic resources, first of all, but also a vision towards the future to finally be able to cure these diseases “.

Ongaro, in the Assembly, underlined the presence of the honorary President of MIG – International Artisan Gelato Exhibition: “I met Fausto Bortolot in 2013, on the occasion of the Giro d’Italia in Longarone. The Mayor Roberto Padrin introduced him to me. We became friends and since then he has introduced me to many people, and thanks also to Uniteis – Union of Italian Gelato Makers in Germany – and to Longarone Fiere, he has allowed all our members to taste excellent artisan gelato on many occasions “.

Representing Longarone Fiere Dolomiti, member of the Board of Directors, Dario Olivier: “I am particularly pleased to participate in the Veneto retina assembly and see the progress this association is making for its members. As Longarone Fiere Dolomiti we have long recognized this friendship with Retina Veneto and we are giving our small contribution to try to help this association. This year, after two years in which the public has not been able to attend, on the opening day of Sunday – 27 November 2022 – MIG will be able to access the public again. So even the members of Retina Veneto will be able to come and visit us and we will have the honor of letting you taste a good ice cream “.

A collaboration served for a fundraiser that also involved the people of Belluno in the world and specifically the North Rhine-Westphalia Family. The president and ice cream maker Riccardo Simonetti: “We are proud of what we have at all, of what we were able to donate with this Ret-Cam. Our intentions are certainly participation in further support initiatives for the Veneto Retina “.

Also Olivier, as vice president and past president of Uniteis e.V., highlights the satisfaction of Italian ice cream makers in Germany, together with the Belluno family of North Rhine-Westphalia, in raising these funds for the purchase of the Ret-Cam, because “today we heard during the report, especially by Dr. Piermarocchi, how important is this tool within the hospital structure in diagnosing pathologies in premature babies “.

To highlight this synergy Dante Dimatore, Chief Executive Officer of the company that imports the Ret-Cam, object of the donation to ULSS No. 6 which allows the diagnosis of preterm retinopathy: “The objectives have been achieved, because there has been the absolute determination of the Retina Veneto association and the management team of German ice cream makers. This allowed in about two years to be able to pass all the necessary points to actually deliver the machine to the hospital administration. They seem trivial things, but overcoming the bureaucratic aspect of the donation was not a simple thing. The willingness of all the actors involved to solve the problem must be recognized, thus managing to introduce the technology. In the face of what Professor Parmeggiani proposed, that is to be able to use this innovative technology also as a support of a series of works that it is developing on retinitis pigmentosa, as a company we have decided to donate an additional component that leads to the use of the machine also in adults “.

So the prof. Francesco Parmeggiani, ophthalmologist, specialist in ophthalmology, associate professor at the University of Ferrara where he mainly deals with maculopathies. While in Camposampiero, for the specialized center for retinitis pigmentosa of the Veneto Region, he is the scientific referent at the European Ern-Eye network. “This role allows me to have direct contact both with patients and with the problems of these patients more generally. So to have that overview that in my opinion is necessary to better address, also from a national network perspective, the problems of rare patients such as people with retinitis pigmentosa, children with retinitis pigmentosa, especially in view of the new perspectives of gene therapy. But without forgetting the prospects of assisted fertilization with preimplantation genetic diagnosis, to allow the possibility of becoming parents without giving birth to people affected by this disease, which in most cases does not have a real therapy. This overall vision led me to make contact with the most competent people in my opinion regarding the management of disability in the pediatric unit, with competent people who are very willing to grow in molecular genetic analysis at the Padua hospital. This way of working as a team has as a minimum common denominator an assembly like today’s, where Retina Veneta and Antonio Ongaro are also able to coagulate the presence of many political decision-makers, of people who in some way guarantee our needs. Without forgetting that a center like that of Camposampiero insists on a Social and Health Authority – ULSS n. 6 Euganea – very well disposed towards innovations that should not be taken for granted. This is also due to the general manager Paolo Fortuna and the medical director Aldo Mariotto, who are helping us with the Padua hospital. In particular, with the geneticists of this company, who have allowed us and are still allowing us to reach those levels of molecular diagnosis that perhaps in other Italian, and especially European situations, have already been reached for some time. Camposampiero remains a reference center, especially for rehabilitation, but obviously we cannot escape from a more comprehensive management of a complex patient such as the one suffering from retinal heredodystrophy ”. 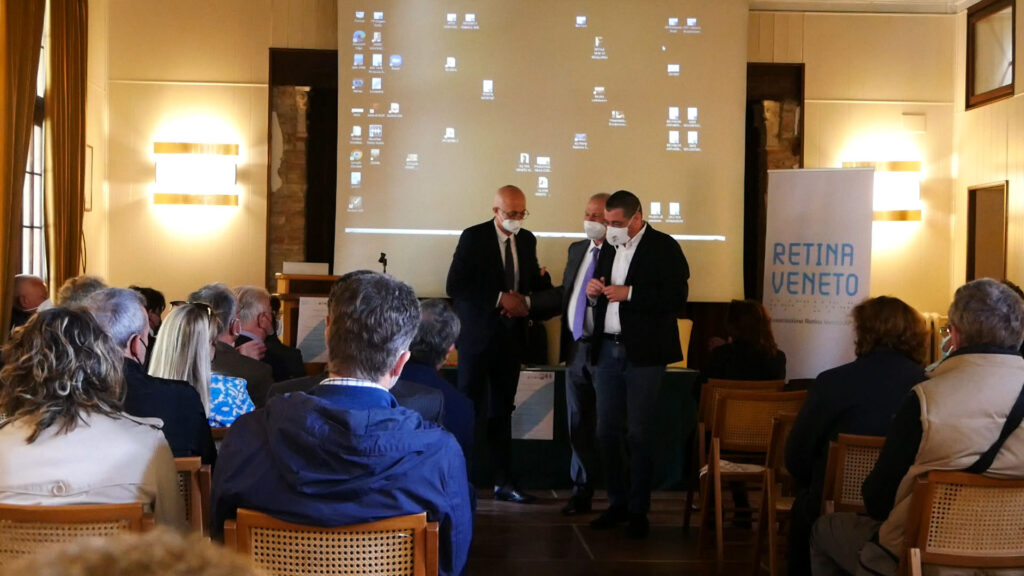