A 4-kilometer loop, starting from the millenary Pieve, retraces the path of the good Pope who, when he was still Patriarch of Venice, went to San Pietro di Feletto to spend moments of meditation and prayer

A path dedicated to the memory of the good Pope. It extends for 4 kilometers in the hills of San Pietro di Feletto, in the Treviso area, where the future Pope John XXIII, when he was still Patriarch of Venice, between 1953 and 1958, loved to spend some periods of rest and reflection, walking among chestnuts, hornbeams and vines.

The memory of the Holy Father’s presence in San Pietro di Feletto is supported by an official document of Cardinal Loris Francesco Capovilla, his personal secretary, in which he speaks of Cardinal Roncalli’s stays in the hills of Felettano. The local elders remember how often the future Pope went on foot to the “panoramic terrace” of the church of Rua di Feletto, amusingly entertaining himself, out of any protocol, with the people he met along the way.

The idea of ​​defining a naturalistic, historical, cultural and spiritual path, named after the good Pope, starts from here. And it has developed, since the autumn of 2013, thanks to the historical and documentary research of the Pope John XXIII Committee, supported by the municipal administration of San Pietro di Feletto and by the precious contribution of a distinguished local researcher, Monsignor Nilo Faldon, priest of the Diocese of Vittorio Veneto disappeared in 2016.

The path of Pope John XXIII starts from the ancient Pieve di San Pietro di Feletto, near which stands the Patriarchal Villa (originally owned by the Countess Maria Walter Bas and then acquired by the Patriarchate of Venice through a testamentary bequest), in which the future Pope resided during the periods of his stay in the village.

Moving clockwise, the path continues in via Roncalli and towards the “Roccolo”, one of the places that the future Pope loved most, because, surrounded by greenery and immersed in silence, it was well suited to meditation and prayer in moments of stop on his way.

The itinerary continues in the green hills, letting you admire the ridge of Manzana and the hill of Formeniga, on the top of which stands the church of San Pancrazio. In the background, from left to right, the hills of Tarzo and Vittoriese with the Treviso Pre-Alps in the background: Col Visentin, the cut of Val Lapisina, Monte Pizzoc and Cansiglio. Towards the east, then, the eastern Venetian and Friulian plains extend.

It is a rural landscape, in which a network of vineyard crops alternates with patches of wood and small villages, connected by roads that climb the hills. One of these is the famous Muro di Ca ‘del Poggio, a demanding climb, known internationally in the world of cycling, near which the path of Pope Giovani XXIII takes along the “100 steps” route, a prelude to the return of the path to the start point.

On the eve of the inauguration ceremony of the path, a letter also arrived from Ivan Bastoni, for many years Personal Secretary of Cardinal Loris Francesco Capovilla: “Monsignor Capovilla – writes Bastoni – was very happy with your initiative because he felt it was sincere, clean , different. Animated and inspired by a genuine will. Walking retracing the steps taken by a holy man can help us imagine what his thoughts could also be in walking that stretch of road, a way to detach ourselves from the frenzy of everyday life that no longer allows us to stop and think and enjoy what we already have. “.

It is the itinerary of Pope John XXIII, but from today – thanks to the work of arranging the paths, now also illustrated by special tables – it is also the itinerary of all those who, more than half a century after Cardinal Roncalli’s walks, want immerse yourself in the silent nature and the wonderful views of the hills of San Pietro di Feletto.

Pope John XXIII, the “good Pope”, was born in 1881 in Sotto il Monte, near Bergamo, to a peasant family. He was ordained a priest in 1904 and a few months later he became secretary of the bishop of Bergamo, Giacomo Radini Tedeschi. A scholar of Church history, he was appointed bishop in 1925 and sent to represent the Catholic Church in Bulgaria and later in Turkey. Appointed Cardinal and Patriarch of Venice in 1953, Angelo Roncalli became Pope with the name of John XXIII on October 28, 1958. On April 27, 2014, in an overflowing St. Peter’s Square, Pope Francis presided over the rite that canonized John XXIII together with John Paul II.
The Pope John XXIII Path is a path of meditation, peace and spirituality dedicated to the memory of the “Good Pope”, who, when he was still the Patriarch of Venice, loved to retreat to the hills of San Pietro di Feletto to rest and restore the spirit. The research of Cardinal Loris Francesco Capovilla, historical personal secretary of Angelo Giuseppe Roncalli since the Venetian years, and of Don Nilo Faldon, a distinguished local historian, combined with the testimony of the local people, have allowed us to define the places touched by the usual journey of the future St. John XXIII during his stays in San Pietro di Feletto, where there is also a thousand-year-old Pieve visited every year by thousands of faithful.

In San Pietro di Feletto, between hills and ancient vines
in the footsteps of the good Pope

Path Pope John XXIII, itinerary dedicated to the “Good Pope” in San Pietro di Feletto where Angelo Giuseppe Roncalli, as Patriarch of Venice, loved to retire in meditation and prayer.

In San Pietro di Feletto the path named after Angelo Giuseppe Roncalli, in memory of when, as Patriarch of Venice, he used to retire to the Feletto hills to spend periods of meditation and prayer.

In San Pietro di Feletto the future “Good Pope” appreciated the silence and the pleasant landscapes. The chronicles of the time remember him walking in the hills and entertaining himself amiably and out of any protocol with the people he met along the way. The memory of his presence is still alive in the places he frequented.

The route starts from the patriarchal villa, sold a few years ago by the Venetian curia to a private individual and still awaiting restoration, to touch points of particular landscape value in a path that leads to the town of Bagnolo. For some years now, a relic of the good Pope, consisting of a fragment of his robe, has been kept in the Antica Pieve, where it is the object of veneration. But already in 1966 a monument with his bust was erected, in front of the patriarchal villa a memorial plaque was placed in the church. Furthermore, the main square of San Pietro was named after John XXIII and the road leading to the monument and the villa became via Roncalli. 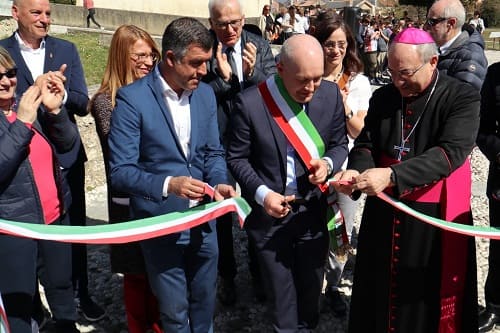