In churches and museums in the hills and pre-Alps on the trail of masterpieces of art
A few steps from Palazzo Sarcinelli, the Cathedral of Conegliano houses the only work by Cima preserved in his hometown, the “Madonna Enthroned with Child between Angels and Saints”, an altarpiece from 1492. To admire Francesco da Milano instead , you can visit the magnificent Scuola dei Battuti adjacent to the Duomo or the picture gallery of the Museo Civico del Castello. Leaving the city in the direction of Vittorio Veneto, a short detour leads to San Fior, where you can appreciate the large Cima Polyptych kept in the church of San Giovanni Battista and, about ten kilometers further east, you can also reach Caneva di Sacile, where Francesco da Milano left a Triptych and an “Incredulità di Tommaso”.

At this point you can go as far as Feltre, where the Civic Museum houses paintings by Cima da Conegliano, Vittore Belliniano and Gentile Bellini, brother of Giovanni, and get to Porcen, just outside Feltre, to visit the church of S. Maria Magdalene with the altarpiece painted in 1504 by Jacopo da Valenza.

Going back south you can reach Asolo, which houses the Assumption of Lorenzo Lotto in its Cathedral and what remains of the polyptych of San Girolamo, attributed to Lazzaro Bastiani. Then you can reach Treviso, where Renaissance pictorial evidence abounds both in the Duomo (with paintings by Titian, Girolamo da Treviso and Domenico Capriolo) or in the adjacent Diocesan Museum (Palma il Vecchio and Girolamo Santacroce), and in the church of San Leonardo ( Vincenzo dai Destri) and in the temple of San Nicolò (Andrea da Murano), up to the Museum of Santa Caterina, to end the tour where it began: from the unmistakable shades of Giovanni Bellini, admiring the incredible blue of the mantle of his Madonna with blessing child. 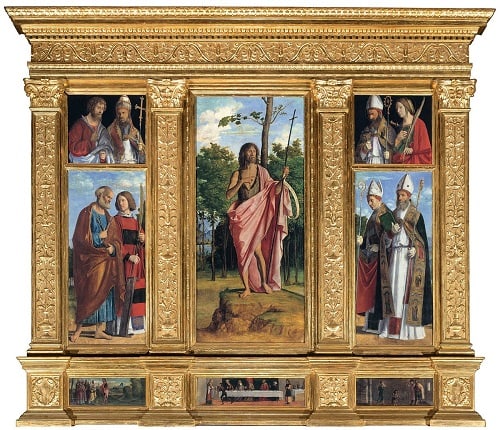