“I Macchiaioli” in Padua until June the 30th

PADUA – “THE MACCHIAIOLI. Masterpieces of a Rising Italy “, the exhibition hosted at Palazzo Zabarella, in Padua, from 24 October last, is extended to 30 June 2021.

“An exhibition not to be missed, which tells about all of us, our emotions and our value – affirms the President of the Federico Bano Foundation announcing the extension – an Event Exhibition that celebrates artists outside the box, free and bold, in spite of conventions and the rules of time; artists who loved to paint everyday life, human value, moments of life and the immediacy of acts and emotions with strength, courage and the desire to leave day after day with renewed energy in spite of any difficulty. We have decided to extend the exhibition until the end of June in order to give visitors the opportunity to come to Palazzo Zabarella and find themselves protagonists of history ”- concludes the President.

The exhibition, curated by Giuliano Matteucci and Fernando Mazzocca, through over 100 works, aims to reopen an important chapter of our artistic history, to enrich it using unusual points of view and rigorous scientific research, through often neglected sources. .

“The exhibition – explains Matteucci – celebrates the Macchiaioli by lifting the veil on what were the ancient collections and the courageous architects and on many completely new aspects. A totally engaging and highly effective cultural operation. “

By focusing on iconic and unpublished works, the curators, through the sounding of ancient sources, have traced back to the first buyers – amateurs, connoisseurs, critics, merchants – who, beyond any convention, surrounded themselves with images inspired by contemporaneity, many of which are on display today. Characters such as Fiorella Favard de l’Anglade, Isabella Falconer and Giulio de Gori played the role of true patrons, purchasing at exhibitions or directly from artists. To their creed is added that of some families particularly sensitive to painting such as the Fabbroni, the Cecchini and the Bandini who, towards Lega, have shown great humanity and hospitality. Finally, the critics of the far-sightedness of Diego Martelli and Ugo Ojetti who with their writings defended the stylistic identity of Abbati, Fattori, Signorini and Zandomeneghi. And then again the enterprising merchants such as Mario Galli and Enrico Checcucci whose aesthetic line has favored the protagonists of the Caffè Michelangiolo.

Also worth noting is the project of the Bano Foundation in favor of schools, free of charge, in this difficult moment. Palazzo Zabarella is ready to welcome children and young people to the Show despite the closing period!

In fact, during this lockdown period, two virtual tours of approximately 20 minutes were produced in which views of the exhibition alternate with details of important works (seven for each video); the guide voice (specialized guide) will focus on themes of daily life, intimacy, work, nature, countryside and animals in the first virtual tour aimed at 4th and 5th grade and 1st and 2nd grade children. Focus of the first video on the following works:

“Harvesting of wheat in the mountains of San Marcello” by Odoardo Borrani; “Alms” and “The girls who play the ladies” by Silvestro Lega; “The chores at home” by Adriano Cecioni; “Avenue with oxen and stone breakers” by Giovanni Fattori; “In the sun” and “Return from the fields” by Vincenzo Cabianca. The virtual tour, on the other hand, aimed at middle school and high school children, starting from the historical context in which the Macchiaoli found themselves working, also deals in depth with the innovative and revolutionary technique of these artists of the rebirth. These are the selected works: “Alms” and “Little girls who are ladies” by Silvestro Lega; “Giovanni Del Greco, a Garibaldian doctor, rescues the wounded during the battle of Bezzecca”, “La mena in Maremma” and “Viale with oxen and stone breakers” by Giovanni Fattori; “Waiting” and “Idle hours in Riomaggiore” by Telemaco Signorini. 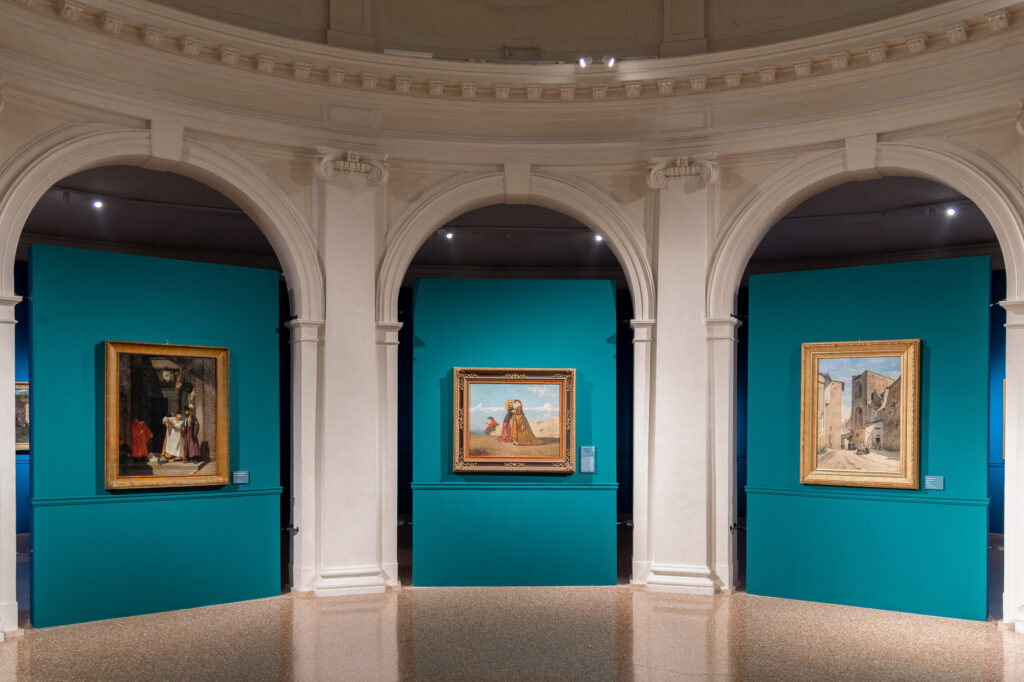