26 MAY 2015
ARTICLES | RELEASES
Great War Tourism – Monte Palon, “The foreing foes shall not pass”
(ANSA) Caporetto is the defeat of the Italian army and its commander, but it is precisely the “generalissimo” Luigi Cadorna, guilty of the rout, who a year earlier fortified Monte Grappa, and with it the peaks above the narrow of Quero (Belluno), and which will then allow the foreigner not to pass.

Monte Palon, Monte Tomba and Monfenera thus become the symbol of the Battle of Arrest, in November 1917, when the Austro-Hungarians were blocked by the Italians on the Grappa-Montello-Piave line.

Monte Palon, 1306 meters above sea level, overlooking Monte Tomba and Monfenera and dominating the Piave line up to Montello, becomes a sort of fortress for artillery and machine guns and while on the lower peaks they will fight, with uncertain fate, with bayonet shots and flamethrowers, the salvos from its summit will become decisive in blocking the men of Erwin Rommel who, in the Second World War, will become the “fox of the desert”.

A section of over a kilometer of trenches, caves and emplacements has been recovered by the National Alpine Association (Ana) of Possagno (Treviso) and is accessible almost all year round thanks to the numerous roadways resulting from the military road network. of 1915-18. Starting from the town of Possagno, follow the military road for just over five kilometers right towards the top of Palon. Arriving at a bend there is a shelter, closed to the public and for use by the Ana, with an altar monument in memory of the fallen. It is from here that we start along what has been called the “path of memory”, climbing towards the mountain, entering the tunnels for gunboats, machine gun nests, deposits and shelters. At the end of the visit, you can go down to the starting point following the line of the castle trench and the walkways dedicated to it.

Along the way, in addition to the landscape on Piave and the towns of Possagno and Alano, you can recognize the well-marked traces of the trenches that were a continuum from the river to Cima Grappa to continue towards the Asiago plateau and beyond.

Along the itinerary, signs and indications have been prepared in 33 points of interest that recount the war events. (HANDLE). 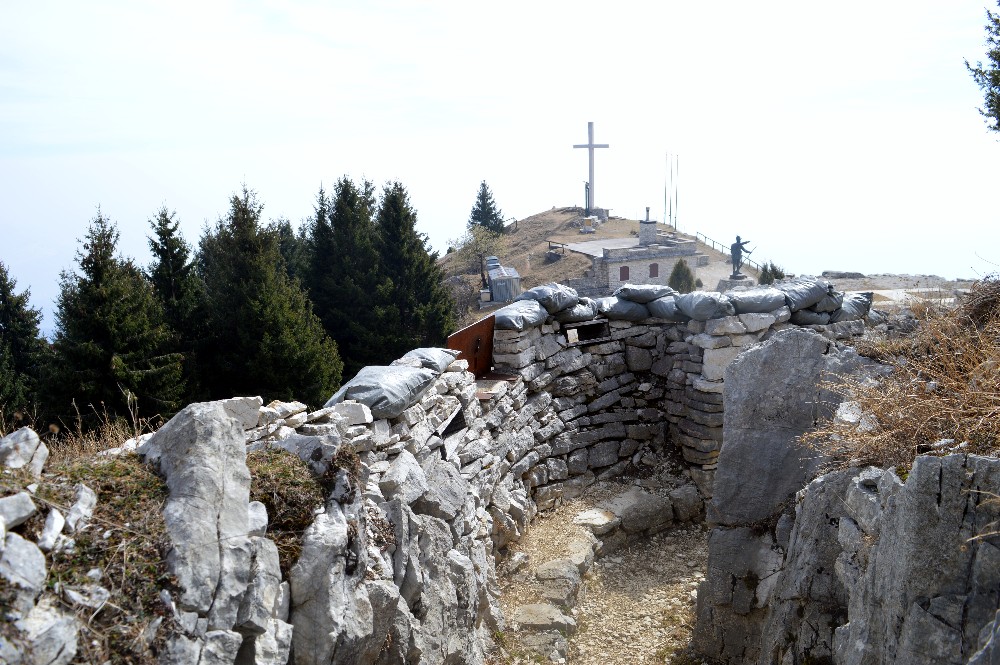