Great War, the paths of memory.

Great War, the paths of memory
Stones and glory
Mercy for the dead speaks of the living
.
The myth of victory and the built memory
erasing the traces of widespread pain
.
Along the front of the Great War in the aftermath of the so-called victory there were not only the torn battlefields, the trenches, the gutted villages. There were also cemeteries. Of any size. In the area of ​​the Massiccio del Grappa alone, there were about seventy of them. They went from field cemeteries, quadrilaterals of brown earth close to the second lines, to larger and more orderly cemeteries, and still others, scattered in the foothills, usually near the mule tracks and cableways, near the hospitals, where they went to burying soldiers wounded in combat or who have fallen ill with the many “trench ills” (intestinal infections and pneumonia in the first place). Virtually all of these cemeteries are gone today. The choice of victorious Italy, between the 1920s and 1930s, was to move the dead into the marble and granite of the shrines that were built near the symbolic places of the conflict. Little is said about this silent odyssey of death, but it deserves attention for at least three reasons.
The first: for years death continued to dominate those lands and, paradoxically, it was the youngest ones, children and teenagers, who had more to do with it. The adults were engaged in the reconstruction of houses and funds, or in the much more risky task of war recovery. Young people could lend a hand by going to retrieve the bodies of the soldiers. Initially, every skeleton recovered was entitled to a small sum of money, but often the kids, smarter than holy one would say, to earn more had no qualms about putting some bones in a sack and a little in a other, then claiming to have thus found the bodies, and gaining double. It is for this reason that soon in the circulars of the Onor Caduti Secretariat we read that for the works of extumulation “the skull will prevail”. For an entire generation of “children of war” it was normal to have to deal with death every day, from some stories still alive today a truly disturbing “normality of death” emerges: the end of a war is not a curtain that falls, but a slow and painful exodus towards an often unattainable normality.

Second reason: this sometimes hasty or poorly organized movement of bodies is one of the causes of the enormous amount of “unknown soldiers” that the first war gave to Italy (the other reason, namely the oxidizable metal identification plates that went to replace the identification sheets of paper in use at the beginning of the conflict, would lead us astray). Just to give an idea. A Cima Grappa of the approximately 12,000 Italians who died just over 2000 have a name. Of the 10,000 Austro-Hungarian fallen, there are barely 295 known. Numbers, cold statistics. But at the time, every unnamed soldier was equivalent to a family that did not know which tomb to cry on. It was a tragedy within the tragedy, which found an outlet, perhaps rhetorical and aesthetically questionable, in the tomb of the unknown soldier on the Altar of the Fatherland in Rome.

Third reason: the way in which today we “see the death” of the Great War is not accidental, but the result of choices, investments, projects. In other words, post-war Italy “built” its own memory by erasing another, that is, the memory of small but widespread war cemeteries. This choice was not without consequences. The aesthetics of the shrines launches precise messages, which are, in most cases, those of the fascist Italy under which they were built. And since reasoning by opposition is easier, there is nothing better, in this Centenary, than taking a trip through the shrines to get an idea of ​​how our memory is still the result of the heavy influences of the twenty years. It will be enough to compare the aesthetics of the death of Cima Grappa and Redipuglia with the aesthetics of three other places: one of the five British cemeteries of the Asiago plateau, the Germanic shrine of Quero and the French shrine of Pederobba. All these places differ from Italian shrines for a first simple reason: the dead there are the same. Many white crosses placed side by side in British cemeteries, in the Anglo-Saxon tradition; many niches at the base of the French monument; a mass grave that houses almost 3500 bodies in the German shrine. In the Italian shrines the presence of series A tombs (that of General Giardino in Cima Grappa and that of the Duke of Aosta in Redipuglia) and of series B (the “normal” soldiers) is evident. Although the German memorial of Quero was inaugurated during the Nazis, the relationship of Germany with the memory of its soldiers was different from that of Fascist Italy: the motto that stands out in the inner room reads: “We were together in the lined up ranks, we were together in life. Because same cross and equal honor were given to us on the tomb ”.

The choices are also different on aesthetics: the mottos that refer to “dulce est pro patria mori” dominate in the Italian shrines (Glory to you soldiers of Grappa, or the motto present in Redipuglia), combined with an impactful architecture , glorious, dominant; British cemeteries communicate silence and intimacy. The Germanic shrine is a hilltop fortress with no access roads. You have to go up a meadow and patiently look for the narrow passage in the dark stone to enter an austere environment, collected despite the grandeur of the architecture, a “treasure chest” for kameraden. And finally, the French shrine represents two mothers sitting next to each other, while mourning a dead soldier lying on their knees. The two sister nations in the first war mourn their dead like two mothers. The French architect makes a choice of memory of pain and loss, he does not make an exaltation of the “beautiful death”. That’s how things went, and they cannot be changed. What we can do today, especially as educators, is to show the new “boys of 1999” how to “remember” is necessary, and that remembering those dead is right and pitiful. But it is equally necessary not to receive the memory passively, as something finished in itself. Because we are not only the product of our history, but also of our choices.
article by Paolo Malaguti for www.tribunatreviso.it of 11 February 2018 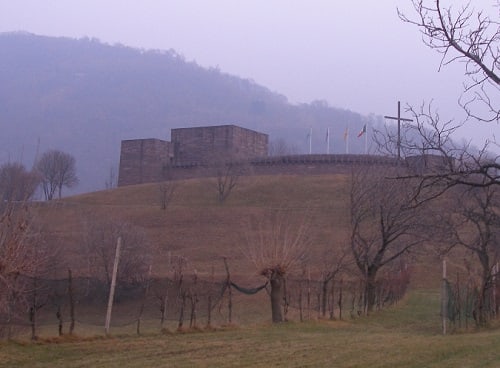