The hilly area of ​​the provinces of Verona, Vicenza, Treviso.

It is said that the distillation of pomace began in Veneto between 1200 and 1300, when Venice was an important market for wine brandy and pomace that it exported to Germany and the East, as a remedy against plague and gout. Already at the beginning of the 1400s, the work “De arte confetionis acquae vitae”, by the Paduan doctor Michele Savonarola, was considered an important point of reference for distillers who wanted to perfect their technique. The use of grappa was essentially therapeutic, for cases of suffocation and intoxication, for rubbing against freezing or as an aid for a more effective action of other medicines to be ingested. Precisely because it was to serve exclusively for therapeutic purposes, the production of grappa was reserved for pharmacists and doctors: for this reason, in 1601, also in Venice, the “Congrega of the University of Acquavitai” was born.

In 1876, in Conegliano, the “Royal School of Viticulture and Oenology” was born where the oenological researcher Emilio Comboni worked, who contributed so much to the qualitative improvement of this distillate (the direct fire still that he perfected and disseminated has become the symbol of Venetian grappa). After World War II, the product made a substantial leap and image that allowed it to definitively emancipate itself from a legacy of “rusticity”, to aim for qualitative improvement in the name of lightness.

The term “grappa” is commonly used for brandy obtained through the distillation of pomace, rich in aromas and flavors. The vines from which the pomace to be distilled most commonly derives are Pinot, Chardonnay, Prosecco, Verduzzo, Tocai, Merlot, Cabernet, Raboso, Friularo, Moscato, Cruvajo, Tocai rosso , Vespaiolo, Sauvignon and Riesling.

The device still used to produce “artisanal” grappa is an alembic (or “lambicco”), that is a boiler in which the pomace to be distilled is placed: the steam that is released is collected and brought to the liquid state in a pipe where it condenses. This apparently simple procedure requires a lot of attention (so that the pomace does not burn). Currently, grappa has been renewed in its taste through technologies that allow the pomace a “controlled” fermentation, just as it happens for grapes. With these procedures, a new generation of light and fruity grappas was born, able to satisfy the most modern tastes looking for naturalness and finesse.

A traditional liqueur from the Veneto region, Grappa Veneta is available from specialist retailers in the Veneto provinces.

Grappa is an excellent distillate to end a meal, but it is also used for pastry preparations. 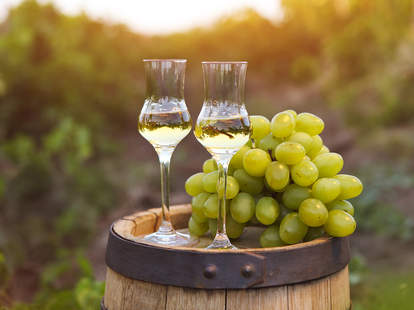