At the World Cheese Award 2016 the “Capra al Traminer” by Latteria Perenzin among the best cheeses in the world. Gold also for the “San Pietro in beeswax” and silver for the “Dolce 3viso”.

Once again it is the “Capra al Traminer” cheese from the Treviso Latteria Perenzin that gives satisfaction and receives another coveted worldwide recognition. A dairy creation of excellence that has managed to conquer the palates of world juries and to win important international awards thanks to a refined silky texture, a perfect balance between the aromaticity given by the refinement in the pomace of Traminer and the goat scent of the milk. of the highest quality from selected stables in South Tyrol.

Among the 3,021 cheeses in competition and from over 30 countries around the world, which participated in the World Cheese Award 2016 in San Sebastian in Spain, the “Capra al Traminer” of the Perenzin Dairy won the Super Gold medal, fully entering in the Olympus of the 66 best cheeses on the planet.

The jury, made up of 250 experts and tasters, in addition to the Capra al Traminer, awarded two other dairy creations by Perenzin: the “San Pietro in beeswax”, a mature cheese with a compact texture which, with its velvety consistency, was awarded the gold medal and the “Dolce 3viso”, it won the silver medal thanks to the particular taste given by the three different types of milk with which it is made, goat, cow and buffalo milk.

“After winning the Super Gold in 2015 with the San Pietro in beeswax, we thought it was difficult to repeat ourselves this year – enthuses Emanuela Perenzin – Instead we did it with the Capra al Traminer, which threw us between the 66 best cheeses in the world! A success that fills us with pride, thanks to a series of essential ingredients: the use of high quality milk, purely artisanal processing and above all the ability to combine tradition and innovation in a dairy specialty “.

A result, therefore, which further enhances the excellent production of the Perenzin Dairy at a global level. The historic dairy in Bagnolo, in the Treviso area, has been passing on the passion for the dairy world for over four generations and, by supporting the courses of the International Academy of Dairy Art, is committed to promoting all aspects related to the art of producing cheeses. of quality, actively supporting training projects aimed at recovering the traditions and dairy culture of the territory.

Through courses for aspiring cheesemakers, the AIAC offers both practical and theoretical lessons during the year, able to provide notions regarding the transformation of milk and the production processes of different types of cheeses, laying the fundamental and most important foundations for a job at risk of extinction: that of the dairyman.

The Perenzin Dairy has been producing traditional cheeses for 4 generations and for more than ten years also organic cheeses, it was awarded a gold medal at the “Salon des Arts Ménagers” in Brussels in 1933.

The processes are handcrafted and are directly followed by Carlo Piccoli who has twenty years of experience gained throughout the supply chain: milk collection, processing, maturing, aging and direct sales to the public.

The knowledge acquired in recent years and having followed the training and refresher courses held by the leading national experts in dairy technology, have contributed to making Carlo one of the leading experts in artisan cheese production, he is also a “master taster of cheeses “with ONAF diploma.

Packaging, administration, sales and public relations are followed by Emanuela Perenzin, great-grandson of Domenico Perenzin founder, together with the children (including Valentino Angelo, grandfather of Emanuela) of the first dairy in the early 1900s in the locality of Tarzo, a few kilometer from the current headquarters built in 1958 and renovated in 1997.

The memory of the scent of milk milked just before harvest, the scent of freshly cut grass, dry hay, small stables … is a heritage that is still used in the many different processes that the dairy produces.

“We consider our cheeses as“ creatures ”- comments Emanuela Perenzin – and as such we raise them until they are properly ripe. The main ability of our company is to always know how to “invent” new cheeses, certainly innovative but also closely linked to the territory and local traditions. “

Passion, in-depth knowledge of all phases of work, study, research and experimentation

and have led the Perenzin Dairy to be one of the first dairies in Italy in terms of the number of types of cheeses produced, with a heritage of over 50 recipes.

A careful hygienic control at all stages of processing guarantees the certainty of the healthiness of Perenzin cheeses.
Furthermore, a modern and innovative packaging system allows fresh products to last longer without the use of preservatives, as required for the best organic cheeses. 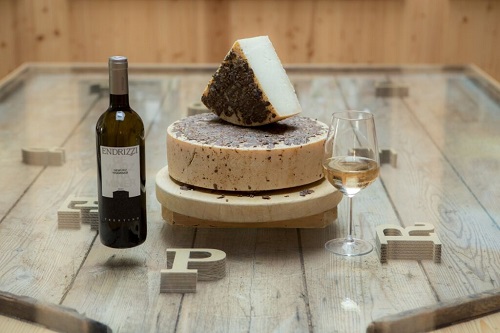