Giusti Wine, when wine is good for the environment

OCTOBER 9, 2020
ARTICLES | RELEASES
Giusti Wine, when wine is good for the environment
Use of goats to cut grass, wildlife restocking, maintenance of the banks. These are just some of Ermenegildo Giusti’s actions to preserve the environment.
For a few days Nervesa della Battaglia has had new inhabitants: 10 goats grazing on the slopes of the hill around the Abbey of Sant’Eustachio. Goats of very particular breeds, including the “Ferrari del Latte”. Ermenegildo Giusti has in fact decided to abolish tractors and mowers for cutting grass, to reduce pollution and to enrich the environment of Montello with new species.

This is just the latest initiative of a much larger project:
<< I returned to my country of origin with the aim of making an extraordinary environment even more beautiful. >> – Says Giusti, an Italian-Canadian entrepreneur who has chosen to invest in his birthplace to enhance it also from a tourist point of view. To make his dream come true, he has taken many actions. In addition to allowing the restoration of the Abbey of Sant’Eustachio (11th century), which was in a state of neglect, the decision was made to choose organic viticulture in the 110 hectares of the property, through a conversion process started this year. An important contribution is also given by the 15 hectares of woods, capable of removing 137 tons of carbon dioxide every year and re-emitting oxygen, which is accompanied by a plan for the repopulation of wild animals thanks to a fenced oasis in the center of the Rolando Estate, ornithologists can live sheltered from predators. And even the birds of prey have returned to Nervesa, as evidenced by a kestrel that has chosen the Abbey as its home.
<< Protecting the environment for me also means keeping the embankments in good condition, cleaning them to prevent them from leading to flooding. I am happy to see that, today, in Nervesa della Battaglia this treatment has become generalized. >>
The main work is certainly the construction of the underground cellar, whose roof reproduces the shape of the hills of Tenuta Ava, a building perfectly integrated into the landscape and designed to minimize heat loss, saving important energy, for example in the refrigeration of the premises.
Inaugurated in July 2020, the new Giusti Wine cellar is largely underground and is spread over 5 floors that go up to 8 meters underground. Perfectly inserted in the landscape of Nervesa della Battaglia, its structure recalls the trend of the Montello hills; from the belvedere, the ideal setting for events and tastings, you can enjoy an incomparable view of the vineyards and the nearby Abbey of Sant’Eustachio. 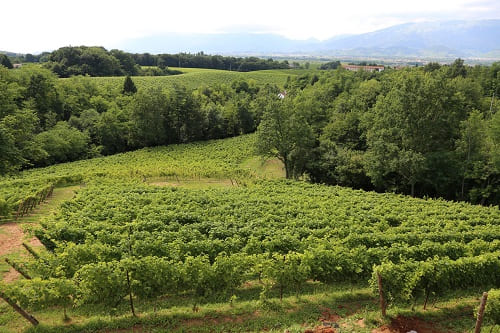