From Munich to Venice by bike,
the Marca at the heart of the cycle route

Munich – Venice
Enjoy cycling and crossing the Alps to the Adriatic.

The long-distance cycle path Munich – Venice closes the gap between the alpine crossings of the Eastern Alps and connects the southernmost German metropolis with the pearl of the lagoon on the Adriatic.
In the middle of this itinerary there are spectacular landscapes for all those who want to enjoy the challenge on two wheels.
This new 560-kilometer link gives the right weight to the most ecological and important means of transport in the world: the bicycle.
Cycling combines travel with sport which is regaining its place in society.
On the entire route, which involves 3,000 meters in altitude, it is also possible to take advantage of the well-organized bus and train services. Any problems with the bicycle can be solved in the numerous specialized points.

THREE NATIONS, THREE CLIMATIC ZONES … WITH THE DIVERSITY of Alpine and Mediterranean areas

Using already existing cycle paths such as the Inn cycle path and small secondary roads, you will cross not only worldly metropolises such as Munich, Innsbruck and Venice, but also the beautiful tourist regions with small romantic towns such as Bad Toelz, Schwaz, Bressanone and Treviso.

Among the exceptional beauties of nature you can note the Tegernsee lake, the Sylvenstein dam in Bavaria, the Achensee lake in Tyrol and the wild Isar river.

A magnificent experience can also be enjoyed by visiting the nearby valleys, for example the idyllic areas of the Wipptal, Val Cadore surrounded by the Dolomites (UNESCO World Heritage Site) and Lake Santa Croce before reaching the Adriatic Sea.

Many castles, fortresses and exploration points accompany this route before arriving in the city of Venice

In Treviso, this tourist artery touches Treviso but also Vittorio Veneto, Conegliano, Susegana, Ponte della Priula, Nervesa, Giavera, Volpago, Villorba, Ponzano, Povegliano, Silea, Casier and Casale for the path that intercepts the Greenway, but also Roncade Monastier and Zenson in the variant leading to Fossalta di Piave. Most of the overall itinerary is already practicable, taking advantage of cycle paths and signs that help tourists find their way around. Some sections of the cycle path still remain to be defined, such as the Vittorio Veneto route, given that at the moment the tourist is diverted to the city center, and a few kilometers of the Alemagna in the section from Pieve di Cadore to Montello where the construction of a track dedicated only to bikes, to keep tourists away from the traffic of state highway 51.

–
Hotel Canon d’oro is located in via XX Settembre,

in the historic center of Conegliano.

Munich-Venice Cycle Route Offer at the Best Western Canon d’Oro Hotel
Stay in a double room with buffet breakfast with a 10% discount on the best rate without restrictions and enjoy all the special services of the Canon d’Oro Bike Hotel:
rich sweet and savory breakfast buffet
energy products (service on request)
safe bike storage and workshop corner
bike washing area
laundry service
sports library, maps and itineraries of the territory

excursions with guides by appointment

Pazio to the huts and alpine views scattered between the Brenner and Alto Adige. Once you arrive in Bressanone you continue towards Brunico where, among the attractions not to be missed, the “Messner mountain museum” of Ripa, pastry shops and restaurants with local cuisine are reported. Continuing towards Dobbiaco and then entering the heart of Val Pusteria, you can admire the typical vineyards and orchards of the area. The Dolomites, declared a World Heritage Site by Unesco, are the leitmotif of the fourth stage of the cycle route. Pedaling then takes you to Cortina d’Ampezzo, towards Pieve di Cadore towards Lake Santa Croce. Once out of the Queen of the Dolomites, you will go through Antelao, Borca and Pieve di Cadore where a visit to the eyewear museum is suggested. In this part of the route, you will have to cover some sections of the Alemagna state road that leads to San Vendemiano, in the province of Treviso. Among the points of greatest interest that will be encountered: Longarone, with the Vajont dam and the city of Belluno. A short stop, and then get back on the bike towards Vittorio Veneto and Conegliano, city centers that open to the last part of the route dedicated to the “gardens of Venice and the cities of art” with an excursion in the hinterland which for centuries was the granary of the Serenissima. Pedaling after pedaling we will reach Treviso, the capital of the Marca Trevigiana nicknamed “Urbs picta” for its frescoed architecture. From Treviso, you will continue towards Venice, with the possibility of choosing between two routes. The “Greenway” that runs along the Sile river through the municipalities of Casier and Casale, until it reaches Porte Grandi. Or alternatively you can opt for the variant along Roncade and Monastier which leads to Fossalta and crosses the places of the Great War. Finish line: Venice. The route was designed to be done entirely by bike or with the use of buses and trains. The project is nearing completion and the next step will be to fully standardize the signage along the entire cycle path.

The best bus and train connections are available along the entire route, characterized by a total elevation gain of 3,000 meters. A full support service is offered on site by the numerous hosts who are friends of two wheels and scattered almost everywhere.

This European Union project is subsidized by the European Regional Development Fund.

Path
three nations: Germany, Austria, Italy
560 km
a delightful way in the alps from Munich to Venice
3.000m of difference in altitude
five chapters of adventure

Along its 560 kilometers, the “Munich-Venice Friendship Cycle Route” will touch the mountains, the hills, the plains and the sea, allowing the tourist on a bicycle to admire some of the most beautiful views of the German, Austrian and Italian landscape. The itinerary starts from Munich and has an average duration of 10 days with a difference in altitude that is around 3,000 meters. The first stop is dedicated to the Bavarian metropolis and its city beaches overlooking the Isar river and allows you to browse the parks and breweries, admiring the Tegernsee lakes, the Sylversteinspeicher, Achensee and the Karwendel nature park with its 350 springs, and then continue towards Tyrol. On the bike, you can then see Jen Bach, but also the Inn valley and continue towards Innsbruck, up to the Upper Isarco Valley in Tyrol, on the border with Italy. An exciting journey that intersects the Swarovski crystal worlds with a trip to the Wolksklamm gorge and then a stop in Innsbruck, the capital of the Alps. With the Brenner Pass, the third stage of the route that leaves the big cities and leaves S 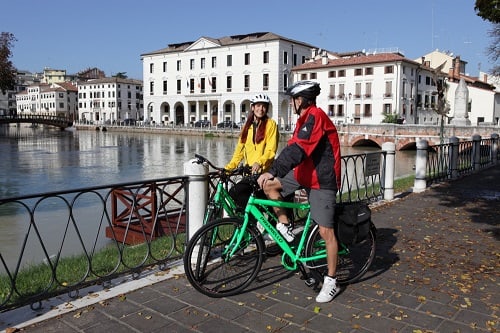