with a “room” all to yourself

Inauguration of the permanent section in Freya Stark

dedicated to the writer and traveler from Asolo by adoption.

Those who go up to Asolo, attracted by the history of the illustrious characters, who lived here and loved the city of the Hundred Horizons so much that they wanted to leave a lasting memory, are amazed by the sobriety of the tomb where the famous English writer Freya Medeleine Stark rests, which in the of Sant’Anna, next to the quiet church of the friars, she wanted to be buried, as if to look forever at this much loved landscape and always a favorite destination for English travelers. The Civic Museum of Asolo and the Municipality celebrate the 25th anniversary of the death of the writer and traveler, who died on May 9, 1998, dedicating a permanent session of the Museum to her called “Freya’s room”.

The exhibition was made possible thanks to the precious donation of Mrs. Anna Modugno, a shy person who still lives in Asolo today, who for eleven years was Stark’s personal assistant. Those who have been guests of Villa Freya, today a private house, of which the beautiful garden with the Roman theater can currently be visited, when its owner was still alive, remembers large trunks full of photo albums, the living room and other rooms full of oriental memorabilia, carpets, tapestries, pottery, earthenware, a well-stocked library, with many first editions of rare and unobtainable works and classified correspondence with prominent writers and politicians such as Lord Kitchener, Lawrence of Arabia, Winston Churchill (who aided , probably, Asolo to be spared from the bombings of the Second World War) and Sir Bernard L. Montgomery. A correspondence that spans over half a century and which, together with its objects, becomes a real narrative, still today of extraordinary relevance.

As Annamaria Orsini, curator of “Freya’s Room” recalls, “A quarter of a century has passed since the last, definitive separation from her” gentle “Asolo and today, once again, she opens the door to her room and invites us to take a journey, embark on a journey to enter an extraordinary narrative: a glimpse of the past capable of speaking significantly to the new generations ». She was the first to go, woman and alone, where no Westerner had ever entered, in places like Yemen that would have been difficult even for a man; her unusual destinations, but always as a conscious and prepared traveler that she spoke a dozen European and Arabic languages, she knew cartography and archeology. She wrote thirty books, traveling for over fifty years, without letting herself be conditioned by conventions. Great friend of the Queen Mother of England, the latter’s trip to Asolo was memorable to greet her at an official tea, right in the Asolo villa and the municipality of Asolo itself, to underline her importance, in 1946 recognized her honorary citizenship and in 1984 he gave her the keys to the city.

“Freya’s room” will be inaugurated on Saturday 12 at 4 pm with a ceremony at the Duse Theater and the ribbon cutting at the Museum.

–
taken from an article of 8.5.2018 by Maria Elena Tonin for www.tribunatreviso.it 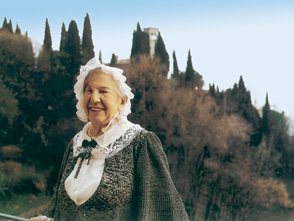