Typical dessert of the Marca Trevigiana, it resembles the sbrisolona cake of Mantua and its name derives from fregola (crumb).
The current recipe belongs, since the early 1900s, to the ancient “Zizzola” trattoria in Salvarosa di Castelfranco Veneto (Treviso) and to the current confectionery industry of the same name.

Boil an egg to be boiled. Peel the almonds by blanching them in boiling water; peel and toast in a not very hot oven; then grate them finely; peel the egg and sieve only the hard-boiled yolk. In a large bowl, put the flour, then the sugar, the almonds, the vanilla, a pinch of salt and mix thoroughly. Then add the sieved yolk and the butter, working everything quickly. It should be a homogeneous ball, wrapped in a sheet of transparent film, flattened and then left to rest in the fridge for about an hour, in order to make it lose its elasticity.

Then butter a bowl of about 26 Ø cm and spread the dough with your fingertips, sprinkle with granulated sugar and bake in the oven at 160 ° (already hot) for 30 minutes, until it is golden and crunchy. Remove the fregolotta from the pan only when it is cold and serve it on fabric fringes.

Presentation of the dish

It should be brought to the table whole and broken with a spoon in front of the diners.

It was Giuseppe Maffioli who wrote the story of this dessert.
“Angelo Zizzola – said Maffioli – arrived in Salvarosa (in the municipality of Castelfranco Veneto) in 1924 and opened a” Pompeian “oven, as if to say” wood-burning “, coming from Piombino Dese (Padua) to make bread for the people of town, and also manage a restaurant together, which gave him a lot of satisfaction, thanks to an appreciated “genuine eating” cooked by himself and by his unmarried sister: aunt Evelina.

Now this vestal of the cookers had had the recipe for a very pleasant cake, or rather “tart”, called “fregolotta” from a friend of her youth, a cook in a noble family with a villa in Terraglio (the state road from Mestre to Treviso). . A very mysterious recipe, since it is a genuine shortcrust pastry with ingredients as old as man’s gluttony: flour, butter, eggs, sugar and natural flavors. The “fregolotta” was initially packaged for the customers of the restaurant, but it was so successful that it had to be packaged for retail sale as well, by cooking it in a wood oven.

Then the demand was such that it was necessary to create a small laboratory and the “fregolotta”, promoted [in those years] especially by the refined “Toulà” of Alfredo Beltrame, became perhaps the most popular and widespread among the Venetian desserts, except for Pandoro.
Now the “fregolotta” is produced by the children of “sior Angelo Zizzola”, Leopoldo and Alberto, according to the teachings of aunt Evelina, who died eighty-six in 1982. “
Meanwhile, the “fregolotta” had taken off and Alberto Zizzola, to respond to the growing requests from Italy and abroad, opened a modern laboratory in Fanzolo di Vedelago (Treviso), not far from the primitive Salvarosa oven and continues to produce it with enormous also happened in this new century.

And here is the recipe: “Mix 150 g of sugar and 15 g of fine salt with 500 g of white flour and drop the fregole of this mixture into a well greased pan with butter. To obtain the fregole, wet the fingers of the right hand in the cream and place them on the flour mixture, then rub your hands together, obtaining the aforementioned fregole. Continue until the flour mixture is finished. Uniform the fregole in the pan well, put it in the oven at 150 ° C until the surface of the cake is a nice golden color. Allow to cool or even cool before serving.

Preparation: Blanch the almonds and peel them; put them in the oven to dry, then chop them coarsely. Mix them with the flour, sugar, salt, melted butter and lightly beaten egg yolks. You will get a very lumpy mixture that you will have to try to spread rather thinly in a well greased pan. Cook for half an hour in a hot oven. 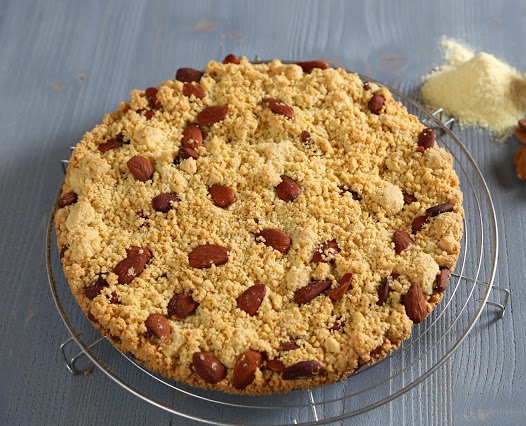