Follina, a green apostrophe between history and culture

30 SEPTEMBER 2014
ARTICLES | RELEASES
Follina, a green apostrophe between history and culture
Follina is a small village nestled at the foot of the Treviso Pre-Alps, whose historical and landscape setting make it one of the most loved and popular historical centers of the Treviso area. Housed in a verdant valley, rich in woods, water springs and lush vineyards, a territory steeped in history and the land of origin of important noble dynasties that made the history of the Most Serene Republic of Venice, the territory of Follina constitutes, with its historic buildings, ancient places of worship and the naturalistic paths from which it is traveled, a popular destination for those who wish to spend a holiday dedicated to culture, relaxation and physical activity among the green of its hills. At an altitude of 200 m a.s.l. Follina is located at the foot of the Treviso – Belluno Prealps, near the exit of the Soligo river valley, through the passage between the hills of Farro ‘, Premaor and Pedeguarda. An important road junction halfway between Valdobbiadene and Vittorio Veneto, the town lies in a pleasant position and enjoys a mild climate, never too harsh in winter and never muggy in summer. The beauty of the foothills landscape, the perfect preservation of the ancient villages, the valuable architectural and historical assets and the defense of their identity and memory, give tourists a relaxing stay in the name of culture, good food and drink as connoisseurs. Follina is located in the valley, rich in history and legends, which saw the ingenuity of the Roman Empire through the Claudia Augusta Altinate; the power of the Da Camino family who erected their fortress here and the Venetian dominion which for 300 years handed over the government of this fief to the Brandolini da Bagnacavallo, an ancient family of condottieri in the service of the Serenissima until its fall in 1797. A small group of Benedictines arrived before the 9th century and founded the first nucleus of that stupendous abbey which still today, intact in its splendor, watches over the people of Follina and is a source of pride and pride all over the world.

The small town binds its history to the birth of the abbey of Santa Maria, of early medieval Benedictine foundation, but which probably sees even earlier the presence of further human settlements from the prehistoric period (about 120,000 BC) and then from Rome, as witnessed by the latter. discovery of sections of a walkway which by now accredited theses attribute to Claudia Augusta Altinate, an important Roman military communication route. Around the middle of the twelfth century, the Cistercians took over the Benedictine monks, who took over the monastic complex in their own ways and style, making it the architectural jewel of rare conservation that all of Italy envies us today. It was precisely the Cistercian monks who started the processing of woolen cloths in Follina and who began the dynamism operating in the Valmareno in the textile – wool sector in medieval and modern times. However, it is from the second half of the seventeenth century that the greatest activity in the sector is recorded. A walk along the via di Follina allows you to admire the fine buildings of the historic center born in the context of this industrial activity: Palazzo Barberis – Rusca, Palazzo Bernardi, Palazzo Tandura and the former Andretta wool mill of the nineteenth century, a notable example of industrial archeology.

S. Scholastica, sister of S. Benedetto (Norcia ca. 480 A.D. – Cassino ca. 547 A.D.)
Tradition has it that they were the Benedictine monks, present in Follina in the twelfth century. approximately, to entitle the source in honor of the founder’s sister, replacing it with the name of a pagan deity. A plaque shows the restoration carried out by the Pro Loco of Follina in 1985.

17th century palace commissioned by Giulio Camillo Brandolini, a man of arms whose family ruled the fiefdom of Valmareno and the Gastaldia of Solighetto on behalf of the Republic of Venice from 1436 to 1797. Today the villa, included in the official catalog of the Venetian Villas of Province of Treviso, it belongs to the Arrivabene Gonzaga family and cannot be visited. The architectural complex, which was originally accessed via a steep road where the entrance was marked by the presence of a small building with an adjacent arched portal, today boasts a good state of conservation, despite the additions of some obviously rear parts. Inside there are still rooms with Sansovinian-style beams, stucco decorations, frescoes, a rich and important fireplace and other considerable works of art.

owned by the noble family of the Bellati counts, today it belongs to the Bortolini family who carried out the last restorations in 1992. The chapel, whose foundation date is not known but which shows elements of the late 1700s, is dedicated to Saints Peter and Paul.

THE SWEATER in via Paoletti

The dating of the first plant is not certain, but according to some ancient maps the presence of buildings in the area in question is evident, which would date back to the second half of the 15th century. the first handcrafted building. A map of 1600 shows a construction characterized by two water-powered wheels in the current area, despite the imprecision of the representation, altered by the pictorial technique of the time, extremely subjective and without a metric scale of reference. A cartouche from the Austrian Land Registry indicates a silhouette of a building that would have the shape very similar to those of the private building adjacent to the Maglio workshop. An inscription, made on a concrete plaque visible on an internal wall, testifies that the last major intervention was carried out in 1906, which involved the reconstruction of the current roof structure. In recent years, maintenance activities have been carried out mainly aimed at keeping the machinery running. In fact, in 1995, the larger paddle wheel, present on the outside of the building, was made from scratch and in 2006 the restoration work on the room attached to the machinery room was completed.

Erected on a previous Benedictine building in the twelfth century. revised in the Cistercian era, the current basilica (1305 Abbot Gualtiero da Lodi – 1335 Abbot Nordio of Treviso) has the typical Latin-plan construction with the facade facing west and the apse facing east just as the Cistercian symbolism required. Inside the basilica, the valuable works on display include: the large wooden altarpiece in neo-Gothic style built by Venetian workers in 1921, a perfect copy of the original altarpiece present in the church of S. Zaccaria in Venice. It houses the sandstone statue of the Madonna del Sacro Calice that some suppose of Nubian origins of the sixth century. , which has always been the object of veneration and pilgrimage by the people of Follino and by the thousands of faithful from all over Italy; the fresco “Madonna with Child and Saints” of 1527 by Francesco da Milano; a remarkable wooden crucifix from the Baroque period (Camaldolese period) by an unknown author. The splendid cloister, older than the basilica and perfectly preserved in the elegant effect of movement created by the columns that constitute it, was completed in 1268, when the Cistercian monks settled in the monastery, as evidenced by the engraving on the stone placed on the northern part of the cloister itself. From the intersection of the central nave with the right transept, the beautiful Romanesque bell tower with a square plan, the oldest artifact present in the architectural complex of the abbey, rises. Present elegant Cloister of the Abbot and Loggia of the sixteenth century.

THE ANCIENT VIA “CLAUDIA AUGUSTA ALTINATE”

The Praderadego Pass: an ancient passage that already connected the vallis mareni, the undisputed domain of the noble Brandolini family from 1436 to 1797, with the mountainous Belluno area, rich in timber, essential for the Republic of Venice, in ancient times. Today the pass is associated by scholars of undisputed fame with the route of the imperial Claudia Augusta Altinate.

The Claudia Augusta Altinate, an ancient Roman military road, was completed by order of the Emperor Claudius in the century. I A.D. to connect Altino, a thriving Roman port, with Ausburg, the Roman Augusta, in the heart of Europe. For years the most accredited scholars have been looking for its original outline, however, it still remains an unsolved mystery today. Researches and hypotheses identify different possible paths also based on the different needs of the empire: military, commercial, social, etc. It is very likely that Praderadego is one of these sen not even, as many suspect, the military road itself. In fact, around the passage, a site of significant importance from the late Roman – early medieval period was located, various objects such as coins and tools of everyday life and stretches of cobblestones with the technical and construction characteristics typical of Roman roads. Praderadego therefore, a pass located between the lush Treviso Pre-Alps, at the same time as a suggestive landscape, where the beauty and harmony of nature still reign supreme, also suggests an interesting journey back in history.

Difficulty: low, flat route with a rare climb
Journey time: about 1 hour and 30 minutes
Clothing: comfortable with sports shoes
Period: all year round

November in Follina you can admire the Palazzo Barberis Rusca and Palazzo Tandura. A must to visit the Abbey of Santa Maria of the 12th – 13th centuries in Roman and Gothic style, with the statue of the Blessed Virgin Mary inside, the colors of the wonderful windows, the wooden altar and the Roman Cloister.

Leaving the Abbey, from the external door, you find yourself in via Pallade and from here the real path begins, starting from the “Pont de Cristo” you follow a canal that carries water from the source “Fiadora”, you go up in the middle to the woods and you get to the cross.

From here you have a beautiful view of the town of Valmareno, the Valley and Castel Brando.

Continue through woods, meadows, vineyards and typical “casere” of the place.

Once in Valmareno you return along a small road through cultivated meadows flanking the Corin stream until you meet the Fiadora spring again; go through the small stretch of wood again, go up a short staircase and find yourself at the “Pont de Cristo” and return to the starting point. 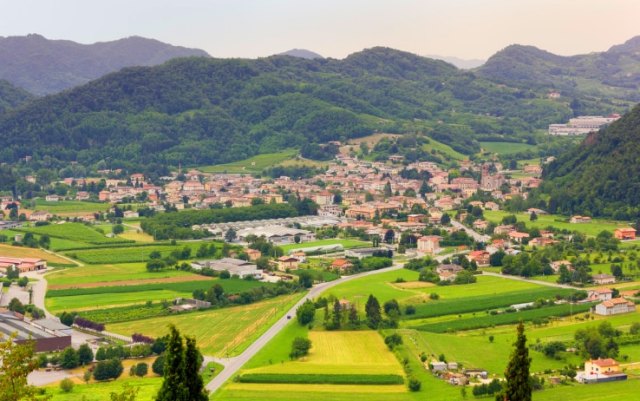