In Veneto there is no Easter without “focaccia”, a traditional dessert that can also take the form of a “dove”, naturally packaged with the same type of pasta. It is an Easter bread enriched with various ingredients: flour, sugar, butter, yeast and eggs. The origin of the dessert is still shrouded in legend, but it seems that the idea of ​​this “sweet bread” came to an ancient Treviso baker: he worked his bread dough with butter, eggs and honey (sometimes almonds) up to to obtain a soft and light dessert, which he gave to his customers on the occasion of the Easter holidays.
Tradition also has it that the “fugassa” was once prepared for engagement occasions and given to the girl’s family with the engagement ring hidden inside. It is a complex dessert that requires a long leavening, with adequate breaks (at least three of about three hours each), to obtain a very soft and light dough that, in the end, whether it is cooked in circular molds or in those in the shape of a dove , will be glazed with a mixture of eggs, peeled almonds, generally chopped but also divided in half, and granulated sugar. To accompany this dessert, Veneto has many suitable wines, such as Prosecco Superiore di Cartizze, Moscato Fior d’Arancio from the Euganean Hills, Recioto di Gambellara sparkling wine, Recioto di Soave.

The preparation:
Phase 1: The yeast begins to work with the warm milk and the 90 gr. made with flour. The result is a very soft dough. Let it rest for about half an hour.

phase 2: First dough with 2 eggs, 50 gr of butter, 350 gr. of flour, 110 gr. of sugar and add the leavening. Knead the dough for about 10 minutes until it is smooth and elastic enough. Let it rise for a few hours until the dough doubles in volume. Try to form a warm environment.

phase 3: Second dough with: 1 egg (or for the ‘Pandoro’ effect 2 yolks), 60 gr. of butter (for the ‘Pandoro’ effect 50 gr.), 250 gr. of flour, 80 gr. of sugar, marsala, cedar, vanilla. After having worked it for a few minutes, add it to the previous leavened product. At this point add the salt and work well and for a long time. The result must be a smooth and elastic dough, if it appears grainy continue to work it. At this point you can divide it in two to have two medium focaccias. Put the dough (or doughs) in the molds and let it rise for the second time at a temperature of 25/27 degrees for a few hours (from 4 to 6 hours depending on the room temperature). For the ‘Pandoro’ effect, after processing, add 50 gr. of butter at room temperature and work the dough until it is lightly absorbed.

Phase 4: If the leavening temperature has been favorable, you will end up with more than doubled dough. Melt a couple of tablespoons of sugar (white or brown) in a little boiling water. When done, brush the shapes and make a couple of incisions with a sharp blade. It’s time for cooking. Bake in a hot oven at about 170 degrees for about 35 minutes (at least 45 minutes if only one large focaccia has been produced). Times are indicative, it would be good to remove them from the oven by testing them with a toothpick, do not trust only the surface color.

The molds: I tried to use molds made with foil (about 3 sheets) by placing them on the ‘back’ of a pot and adding parchment paper to the bottom. Then I moved on to the Pandoro forms which give a much more appreciable crust. 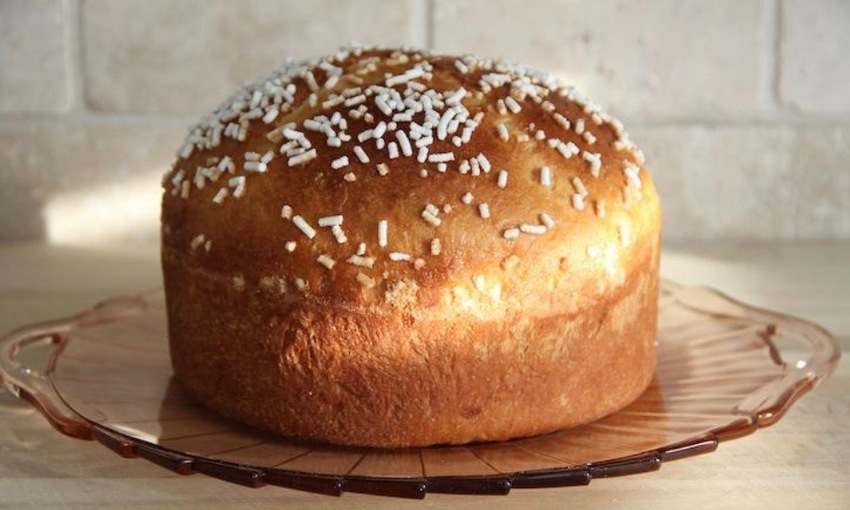