Description:
We are located in one of the most beautiful areas of the Prosecco hills. The excursion will take us to visit unexpectedly wild places a stone’s throw from the villages of the foothills, where important, very strategic settlements existed since ancient times. It starts west of Farra di Soligo at the intersection of Via Faverei and Via San Nicolò. Following the signs indicating “n.3 Gor della Cuna”, take a country road that later becomes a path, along the orographic right of the Rui Stort stream. In a few minutes you enter a small canyon made up of high conglomerate walls and you reach by ups and downs the Gor della Cuna, whose name derives from the waterfall which, with its erosive action on the rock, has created a suggestive environment. Continue through the vineyards until you reach the “little house” in Vanal, a splendid country farmhouse open to the public. You leave trail n.3 to follow n.4 “Alpine path” which reaches another house surrounded by olive trees and then arrives at the Sentiero delle Vedette. The view is truly spectacular on the hills dotted with houses and twisted streets, while the Credazzo Towers appear mysteriously in the distance. Continue east on the ridge line of the Vedette, passing through Monte Pertegar, the Xocco fork, Pian Serafin, the Colesie and Col Vinal, then at the Forcella San Martino you descend zigzagging through the southern vineyards until you reach a saddle where the Crepe Trail starts. This will take us close to the Col della Porchera, where we turn right again through the vineyards and descend to Borgo Grotta. From here, following Via Rialto and Via San Nicolò, you pass in front of Villa Savoini and Villa Caragiani – Badoer, completing the ring.

Curiosity:
The strip of small hills between Soligo and Col San Martino, made up of the Colle di San Gallo, La Porchera, Colle di San Giorgio and San Vigilio, is called the “linea dei castellieri”, since there have been reports of human settlements, as evidenced by sporadic finds of pottery right on the top. Being the first hills to overlook the plain, for centuries they represented strategic observation points used up to the most well-known phases of the Lombard and medieval periods.

The photos and the GPS track are available on the website www.lazione.it
The map was developed from the scenario: 3Dolomiti – © Consorzio Dolomiti

The hidden paths of the Treviso Pre-Alps
35 excursions between nature and enchanted villages from Segusino to Villa di Villa
Giovanni Carraro
Ediciclo publisher, 2013 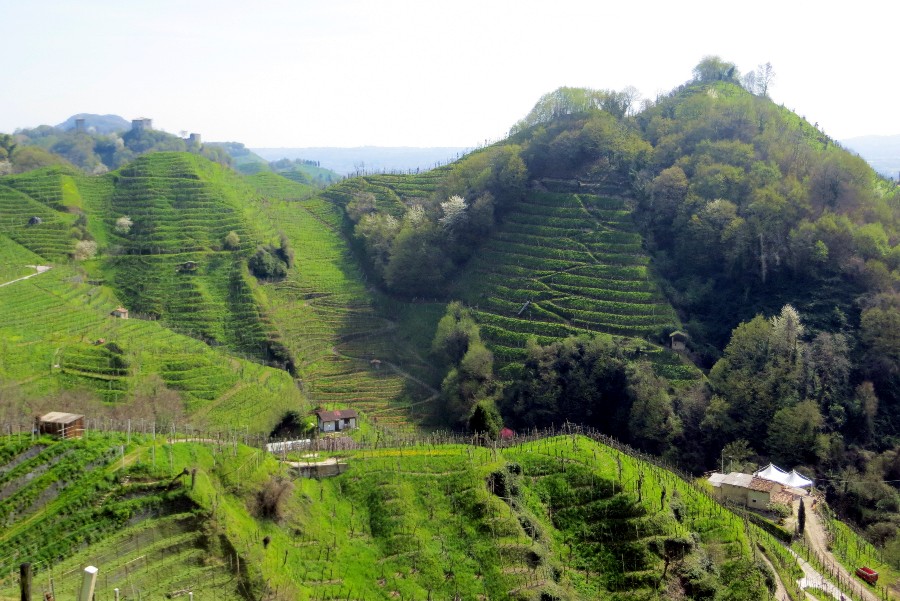