Excursion to discover the Crevada stream

The green of the woods, the quality of the wines, the amenity of the views and the gentle hills that can be traveled on foot, by bike or even on horseback make this area an ideal area for those who want to leave the city and relax in a respectful place where nature is still untouched.

The naturalistic path touches the churches of San Pietro and Santa Maria and develops along the valley crossed by the Crevada stream, coming into contact with naturalistic emergencies of absolute interest. The walk is within everyone’s reach. There are areas equipped for stops.

Along the way you will cross several karst springs and small caves, in particular you will find the sites of the “Val Trippera”, the ford and the ruins of Molino Crevada, the numerous karst springs, the “Landri” and “Landron” caves, karst phenomena and typical artifacts of the Feletto area.

During the autumn period, the mild climate and the typical colors give a truly magical atmosphere to these places.

Duration: from morning to dusk

Clothing and accessories: hiking boots and backpack with food and water

The Crevada is a stream that originates between the municipalities of Refrontolo and San Pietro di Feletto (TV) in the locality of Mire. After descending a narrow valley, it flows near the homonymous hamlet of Susegana and, near Sarano di Santa Lucia di Piave, flows into the Monticano. In Parè di Conegliano it welcomes the waters of the Valbona and shortly after is crossed by an ancient Roman bridge (2nd century). (Source: Wikipedia)

Some possible recommended itineraries in the area:

The first starts from the square of the parish church of San Pietro, (where there is a large showcase of the routes) descends towards the Crevada stream following its course, towards the south, in the suggestive and naturalistically interesting “Val Trippera”, known as an area rich in caves and caverns, up to the territory of Refrontolo.
At the height of the ruins of the former Molino Crevada, it goes back to Borgo Anese, an ancient court of houses of great charm even for those who love to get to know the ancient reality of the country.
The toponym recalls those who still worked wool in the 14th century.
The oratory is dedicated to St. John the Baptist, who is in fact the protector of wool workers.
Continue beyond the provincial road towards Borgo Castagnè, pass by Borgo Frare and return to St. Peter’s Square, where a quiet park with children’s playground and picnic area awaits us.
In addition to visiting the ancient parish church, not to be forgotten is the nearby Ceschin house with frescoes on the façade and single lancet windows with a seventeenth-century balcony and a 16th-century Agosti palace which preserves the stone coat of arms on the façade.
An interesting branch goes up from the stream towards Borgo Frare, creating a shorter hiking ring.

The second itinerary starts from the church of S. Maria.
Parish church of the Purification of the Blessed Virgin, whose first attestation dates back to 1233, largely rebuilt in 1767 and rededicated.
We descend towards the south touching the naturalistic sites of the “Landri” and the “Landron” characterized by numerous cavities of karst origin and springs with some alternatives of route that allow also in this case itineraries of different length.

It starts from the Colvendrame restaurant, descends towards Casa Lessi and continues through vineyards to the old ruin of Molino Crevada. Continue north and cross the small bridge in sleepers a little further on.You continue climbing up to Casa Patrioti and from here you descend westwards to Case Lorenzon and the Cemetery from where you head south-east towards the Colvendrame restaurant, point of departure.

In Santa Maria di Feletto, within the property of the De Lozzo-Dalto Foundation (via Pianale 36), there is the “Al Rocol” nature trail. The path winds for about 700 meters and has a gradient of 3 to 19%. It is open to guests of the residential center and to all those who want to do physical activity outdoors or take a walk in a natural area of ​​enormous beauty.
Along the path there are signs relating to the local flora and fauna.
The area is equipped with an outdoor teaching station, a refreshment-barbecue area, a bowling green and a volleyball pitch 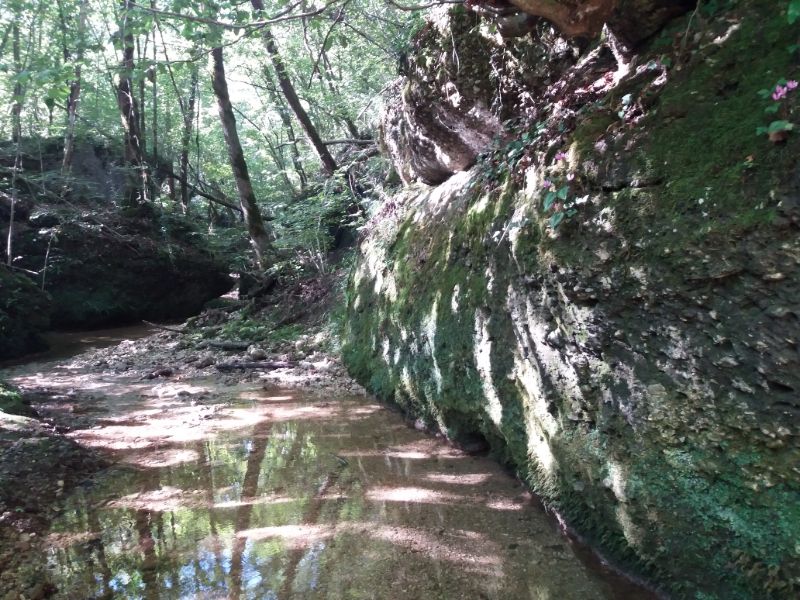