Everyone in the saddle on Montello: Veneto starts again from cycle tourism

“World Bicycle Day” is celebrated on 3 June. And on the Treviso hills the “Montello Pass” for cyclists is born.

With its 2.5 million bicycles sold in 2020 * (also thanks to the Government’s “mobility bonus”, ed.), Italy seems to want to start again from cycle tourism to chase away the memory of the lockdown and thus be able to rediscover the own landscapes in the open air. Veneto is on the podium of the favorite destinations for lovers of two wheels (10%), thanks to its natural riches crossed by cycle paths. And among the destinations of the “World Bicycle Day”, this year Montello stands out.

In the 2nd Isnart-Legambiente report “Traveling with the bike” it is highlighted that in Italy cycle tourism is experiencing a phase of growth, especially as regards tourist experiences associated with bicycles organized by tour operators which in the last year recorded an increase in 30%.

But what are the favorite destinations for cycle tourism? Veneto is on the podium, chosen by 10% of cycle-tourists, second only to Trentino and Lombardy, as the starting point of their itineraries.
By intercepting this trend, from the Treviso hills comes the idea of ​​networking and offering their cyclists something more to guide them in the discovery of the territory: also to entice the cyclists who will celebrate the world bicycle day on June 3, the operators of the sector have given life to the “Montello Pass”, a set of services ranging from the rental of electric bicycles to explore the places of the Great War to the routes through the farmhouses in the area.

The Montello Pass, which can be downloaded from the montello.travel website, is a weekly advantage card that allows visitors to take advantage of different types of agreements offered by the local museum network and by the many other participating activities.

The councilor for culture of the Municipality of Montebelluna, Debora Varaschin, spoke: “Our territory has a great tradition with respect to cycling. For decades the Montello area has been a favorite destination for sportsmen and cyclists in particular. Thinking of this area as an ideal place for cycle tourism represents an evolution or a valid alternative in a context, such as the current one, in which the tourist experience becomes more and more an outdoor and proximity experience. These are the premises that push us towards promoting this area also through the Montello Pass tool, a weekly advantage card that can be displayed directly from the smartphone at affiliated businesses, accommodation facilities and museums in order to enjoy the benefits offered ” .

“The signs of a strong need to return to ecological two-wheeled vehicles were all there – says Stefano Landi of SL&A -. The data collected also in our lands by eco-counters distributed throughout Europe (devices capable of detecting the passage of bicycles, ed.) Gave encouraging results. Compared to the previous year, in 2020 there were significant peaks in transit in the periods of May (+ 81%) and September / October (+73), especially during midweek days (therefore for work trips).

“It is on the strength of this scenario painted by SL&A that we wanted to create coordination in order to offer better services to those arriving in our hills – explains Francesco Redi of Twissen -. The start was the most encouraging: in the first months of its launch alone, the Montello Pass has already had more than a thousand fans (Italian and foreign) who have decided to join “.

Finally, some national data. The use of bicycles linked to tourism registered a boom last summer: according to Isnart surveys, almost 5 million compatriots used bicycles during their holidays, equal to 17% of the total tourists.

This audience was divided into two main segments:

“Hard-biker” (47% of cyclists), within which there is a predominant segment, composed of those who indicate the use of bicycles as the main reason for vacation, and a modest but significant share of people who have taken holidays “By bicycle” using the latter as a means of moving from one place to another;
“Soft-bikers” (53% of cyclists) for whom the use of bicycles is less common and is reserved for excursions and short trips and in general for less intensive use than the former. 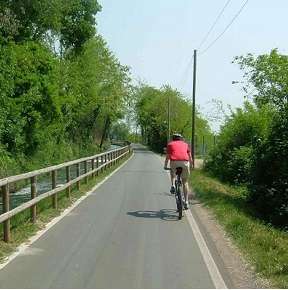