He could be defined as a child of war and precisely in the events linked to the First World War he finds his origins, random origins and linked to the needs of the moment. However, this is not an illegitimate child, but one of those treasures of Italian gastronomy, born from the casual conjugation of ingenuity and the need of men.

The intoxication method would originate from what happened in the Left Piave Trevigiana during the retreat of Caporetto. To hide home cheeses from hungry Austro-Hungarians, they would have been covered with pomace, considered waste material and therefore not subjected to particular attention and investigations. After all, it was better to eat spoiled, bad-tasting cheese than to starve. Once the dangers passed, the “patches” were recovered, but in the meantime they had changed the color of the crust, which had become dark purple, and the consistency, giving the cheese the aromas of the must. This unusual maturation, however, turned out to be very pleasant, with a very particular taste between spicy and fruity, a real delight for the palate, so much so that it was implemented even after the war. Over the years, from being a housewife and peasant, the intoxication has evolved into a refined and refined treatment and today “the Inbriago” is accompanied by the original wine in a series of highly successful and quality gastronomic preparations.

Today the area involved in the production of these typical cheeses is the entire Province of Treviso in its 95 municipalities and the identity of the product derives from the particular maturation and refining of the wheels immersed in fresh and soft marc. Local semi-cooked cheeses are refined, such as DOP Asiago pressato and d’Allevo or Montasio, Latteria and all similar typical products of Treviso dairies, also specially produced. The morphological and dimensional characteristics (diameter, side, sides, marking) are evidently those typical of the starting cheese. On the side, the “INBRIAGO” marking is allowed for the specially produced wheels, or, as mentioned, the PDO and non-PDO origin marks.

The drunk cheese is typical of the Treviso province, widespread in the peasant world. Intoxication is a particular treatment that seems to have been discovered by chance during the Great War, when the farmers of the Conegliano and Oderzo areas, to hide the cheeses from the raids of the Austrian soldiers, put them under marc. Another version traces the treatment back to an invention of a Treviso farmer who, unable to oil the cheese rind, because the oil was too expensive, decided to replace it with grape must.

For intoxication, different forms of local semi-cooked cheese are used, such as DOP Asiago pressato and d’Allevo or Montasio, Latteria and all similar typical of Treviso dairies (which must have a minimum maturation of two months and must not present defects such as cracks, swellings, molds or animal parasites), also specially produced. The morphological and dimensional characteristics (diameter, side, sides, marking) are evidently those typical of the starting cheese. On the side, the “INBRIAGO” marking is allowed for the specially produced wheels, or, as mentioned, the PDO and non-PDO origin markings. The rind takes on a particular color, marked straw yellow if the pomace comes from white grapes, more or less dark purple and intense if it comes from red grape pomace. The paste takes on a specific softness, a color between white and straw yellow, an aromatic, spicy, pleasant, very inviting flavor, entirely its own.

Wheels of impeccable quality are selected, with a minimum maturation of 60 days and aged cheeses, up to 24 months, can also be drunk. The chosen forms are immersed in soft pomace, just drained after natural racking and not subjected to pressing, placing them separate from each other so that the pomace completely surrounds them and the immersion is complete. All the local Treviso pomace can be used, including Clinto and Fragolino, as well as those of the passito wines. The “Inbriagatura” procedure, which takes place in large enough tanks for a complete immersion of the wheels, requires the availability of freshly drawn pomace. The duration of the immersion is variable: for freshly ripe cheeses it ranges from 8 to 10 days, for aged cheeses up to 30 days. The re-start is allowed, for two dives separated from each other, particularly valid for aged cheeses and for marc of dried grapes. Once the “intoxication” is complete, the wheels are extracted from the marc and subjected to drying
Ulteriori informazioni su questo testo di originePer avere ulteriori informazioni sulla traduzione è necessario il testo di origine 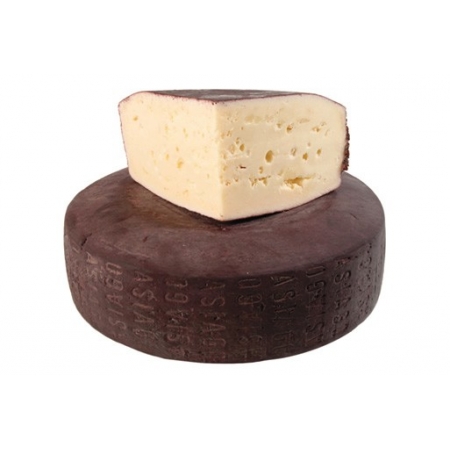