BIRRA DOLOMITI JOINS AS A PARTNER TO EXPO DOLOMITI HORECA, THE MOUNTAIN HOSPITALITY AND RESTAURANT FAIR, WHICH WILL BE HELD FROM OCTOBER 10 TO 12 IN LONGARONE

This appointment represents a moment of encounter between hoteliers, restaurateurs, public businesses in the Dolomites, and in the mountains more generally, with companies that supply this important sector with goods and services. Tourism, which is constantly expanding in the Dolomite mountains, needs a meeting point where new business can be developed for companies working in the HoReCa world. The event was born, in fact, from the need to prepare a territory to welcome and enhance the opportunities that will come with the Milan – Cortina 2026 Winter Olympics. Birra Castello with the Birra Dolomiti brand is alongside Dolomiti HoReCa in this path, confirming the its presence and roots in the territory. The company has a special bond with the mountains, in fact, Birra Dolomiti is made with the use of 100% Italian cereals and among the ingredients there is also malt from barley from the Dolomites. Raw material result of an integrated supply chain project born in 2006, thanks to the collaboration with an agricultural cooperative that cultivates two-row barley for beer for the Fabbrica in Pedavena in various municipalities in the province of Belluno on the slopes of the Dolomites.

Birra Dolomiti has decided to be alongside this important trade fair event thanks also to the support of the Moser company, the official distributor of the product in the Belluno area. The Moser company has always operated in the province of Belluno. Founded in 1948 in Pieve di Cadore, today it represents a point of reference, being a leader in the beverage distribution sector, also covering part of the provinces of Bolzano and Trento. The attention and sensitivity towards these territories led Birra Dolomiti and Moser to collaborate with Longarone Fiere with the aim of showcasing the excellence of the territory.

In this context, Longarone Fiere Dolomiti, recognized as a mountain exhibition center, has always put itself at the service of the territory and the realities that invest in it. For the President Gian Angelo Bellati “the important visibility that this trade fair can give, combined with the major events that increasingly see the mountains as the protagonist, will also highlight the extraordinary agri-food excellence of an area that is a symbol of quality of life, from a slow & green experiential tourism. Even more thanks to the synergy with Fabbrica in Pedavena with Birra Dolomiti which is teaching in this regard. A partnership that will therefore be able to best represent the wonderful flavors of an uncontaminated land “.

LONGARONE FIERE DOLOMITI – The Exhibition Center of the Mountain

The city of Longarone with its Exhibition Center is located in the Veneto region, in the province of Belluno, at the foot of the Dolomites, a UNESCO heritage site. Thanks to its location, it is the ideal center of gravity of the triangle Cortina d’Ampezzo – Tre Cime di Lavaredo – Venice, which has always been a great international tourist and economic attraction.

Since the beginning of the second half of the twentieth century, the political and economic reality of the Belluno area has identified the city of Longarone as the appropriate stage for enhancing and promoting Belluno ice cream makers from Cadore and Zoldano. These had the undisputed merit of developing and making known the artisan value of how to produce ice cream all over the world, organizing, in 1959, the first edition of the “International Ice Cream Show”.

It was immediately a success that recorded notable results in entrepreneurial and public participation from all over the North-East of Italy and from neighboring countries Austria and Germany.

Enhanced by the International Gelato Exhibition, Longarone Fiere Dolomiti has promoted, over the years, a precise development program, arriving at the annual organization of 12 trade fairs on a covered and equipped exhibition space of over 12,500 square meters and another 5,000 square meters uncovered with a large adjacent parking.

Specific moments of the mountain realities are the furniture with Arredamont, agriculture with Agrimont, the building hall with Re-Costruire, the hunting realities with the presentation of the alpine hunting reserves and the fish ones with Hunting, Fishing and Nature, EXPO Dolomiti HoReCa with Dolomiti Show and the Tourism and Mountain Sports Fair, the Forest Fair with the Festival and, to be completed, Arte in Fiera Dolomiti, Woman Art Expo and Reptiles Day.

The events organized by Longarone Fiere record over 40 annual days of opening of the exhibition pavilions, with the participation in the exhibition of 1,100 companies and almost 150,000 visitors from Italy and abroad.

The exhibition activity is increasingly accompanied by an important congress activity, thanks to the wide availability of spaces and the ability to prepare settings of all kinds, supported by numerous services.

Longarone Fiere Dolomiti is also an active partner in various and important European projects, such as LIFE VAIA and DIGITOUR, as well as partner of the Europe Direct Montagna Veneta Center and selected as the organizer of the EU Industry Days 2022.

Birra Castello S.p.A is an Italian company based in San Giorgio di Nogaro, in the province of Udine, and today represents the first 100% Italian beer producer with more than 1.3 million hectoliters sold and a turnover of 108 million. of Euro.

To date Birra Castello S.p.A. owns two production plants – San Giorgio di Nogaro and Fabbrica in Pedavena – where 140 direct employees work. It is present on the market with several brands as well as Birra Castello: Birra Dolomiti, Superior, Pedavena and Alpen. The company’s customers include the most important Italian Horeca distributors and the products are featured on large-scale retail trade signs. The company produces in its own private label plants for many of the most important groups of national and international organized distribution.

In terms of respect for the environment, since 2013 Birra Castello has joined the program for the assessment of the environmental footprint of CO2 reduction certified by the Ministry of the Environment and the Protection of the Territory of the Sea.

Birra Castello is for the next three years a partner of the FIT – Padel sector and of the Slam padel by MINI, thus becoming the official beer of the Padel Sector – FIT. 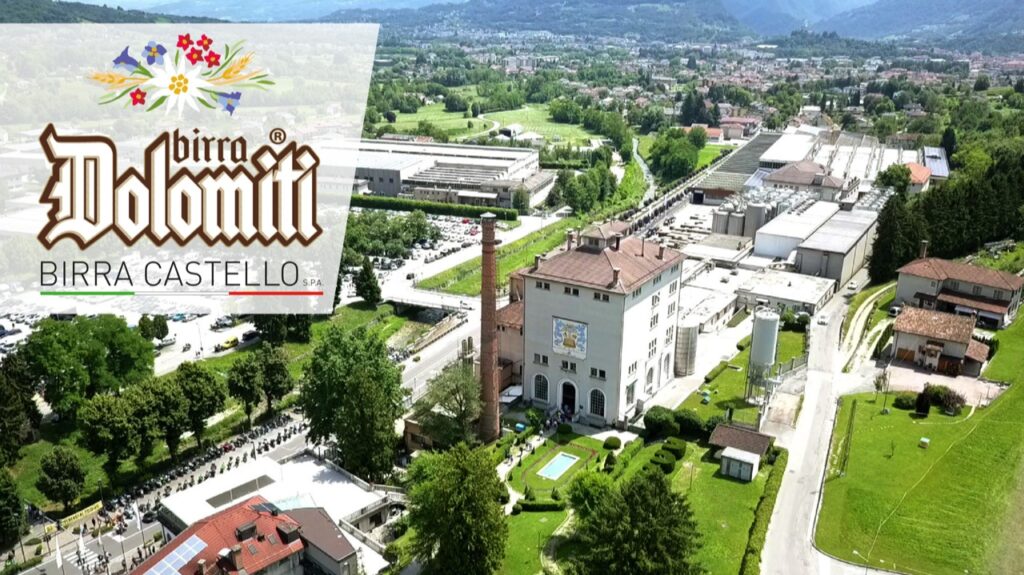