Costalunga, the museum hill at the foot of Monte Grappa

At the foot of the Grappa, where Canova took the stones for his temple, every year painters and sculptors leave indelible marks on ancient walls and forgotten monoliths.

It is the “Cibiana de noaltri”, but don’t say it around, that the president of Art and Nature, Renato Zanini, gets angry and points out: «In Cibiana there are murals. We do not do murals: only frescoes, or pictorial works that last over time ».
In the meantime, to reach this museum en plein air, you don’t need to venture into the mountains: just stop at the end of the Asolo hills overlooking the Grappa. You get there a little by surprise from the Sp 26 which goes from Pederobba to Bassano, turning left at the Bianco bar and then immediately right. Or by descending from the Asolo hills and going up towards Possagno, which can be seen perfectly from the village.
The village of Costalunga, in the municipality of Cavaso del Tomba, is a museum under the sky, between dry stone walls, a green that breaks the skin and many trees that enjoy the particular microclimate.
Coming from Asolo and Monfumo, the first sculptures welcome you just before the bend that enters the town. Reaching it for the first time on the side of Onigo, the triumph is that of nature, with a few buildings (and a couple of obscene factories for ugliness) and many branches intertwined alongside the hill, we found a persimmon tree with about 400 fruits, but also a pomegranate with “apples” as big as small pumpkins.
And up there, at the Zanini house, an agave taller than a Vatusso which, they say, does not need to be covered and saved from frost in the bad season. In short, a Ligurian Riviera without a sea. Here everything amazes and nothing surprises anymore, so much so that when you meet one, two, three stone elves (carved, but you find out if you are right) you do not have a problem, on the contrary it seems logical and suitable for the context. And even the lion that appears among the shrubs, if you don’t catch him at night, is sympathetic.
The villages, sculpted and painted, are actually three, Costalunga, Bocca di Serra and the ancient Castelcies. The three villages, sparse in population but honest in history, their walls and the stones that surround them, constitute an “open” museum, a gallery between trees and houses that bears the name of an association founded in 2000 in Cavaso del Tomba, “Art and Nature”.
In these twenty years there have been, from time to time, about fifty painters and sculptors who have left their mark on the walls and stones of this “museum” which stands among walnut and alder, hazelnut and acacia, vine and pear trees.
Nothing that can, perhaps, be ascribed to the elite of modern art. Rather an endless helzapoppin, which also surprises the many cyclists who climb these roads (despite their fierce slopes) and delight in the sight of popular art.
The scenes depicted on the walls, just like in Cadore, belong to the rhythm of the seasons, they represent the mowing, harvesting, harvest, seasonal products and fruit, but also characters of popular religion, while the huge worked boulders give lions with wide open mouths, grotesque faces, old trolls, sleeping women against the backdrop of shady meadows and young wood elves. All interspersed with historic fountains, centuries-old capitals reused to set a surprising painted hare, and millenary churches such as that of San Martino.

“You are already happy that you find someone to ask questions – a pensioner addresses us – Everyone escaped here, there was a frightening emigration between the two wars and then another after the Second: almost all in Australia, many never returned even for the holidays, many buried in the mine or climbed, by construction workers, on the huge buildings of Sydney built by the Italians, indeed by the Venetians. Were there no frescoes and no tourists, here it would be a desert ».
It is not quite like this: here the things to see were already there and, beyond adult tourism, that of the Under, scholastic ones, must be counted: there are many school groups that go up here to measure themselves with colors and design: they have taken possession of of two retaining walls of the countryside, straddling two hills, and have transformed them into a very long palette. In the end, like real artists, they signed with the name of the school, the class and the country. Has anyone, so far, come up with the idea of ​​turning this into a competition? “We are already doing a lot. As it will be easy to guess, money doesn’t grow on trees here. The only ones remain to pay for the colors to those who leave the works on our walls or along our streets ». And, then, to give prestige to the three countries is the history: between Bocca di Serra and Castelcies, in addition to the church of San Martino – which contains valuable frescoes, the ancestors of those that today are the characteristic of the area – there is the presence (now in certified copy, after having feared the theft and having hospitalized the original in the Paduan museum of the Eremitani) of a stele with a double Rhaetian-Etruscan inscription, dating back to the 2nd century BC. Here in the year 1000 there was also a castrum of great importance, which became a medieval castellar, at the center of which someone made havoc: he erected a terrifying telephone repeater. In short, the DNA of Valcavasia is of the highest profile and it was not the UFOs that carried the message that generated Art and Nature and the widespread museum. The annual event, with the creation of the works, is set for the second weekend of September. Old men like Daniele Cunial are proud of it, who show you the road built by Canova to bring the stones of the temple to Possagno, dug “here a stone’s throw away”, but who also offer to take you to see the trenches dug on the side of the hill in the First World War. But it is also possible to listen to the story of Ugo Rossetto, owner of the walls of the only tavern in the area (now managed by Flavio Tessari, “who is not here”), who tells you that, when his father emigrated “to make the cow boy sotto paròn «, 250 people lived here. And when he returned (“with the steamer and pregnant mother, of me, to be born here”, they told him to hurry, otherwise he was born in the earth – or rather the water – of no one), he found four cats waiting for him. Four cats, because emigration not only empties the countries on the shores of the Mediterranean, because the mare nostrum! it is not the only limit to cross in order to seek economic redemption; do you want to put a beautiful ocean? In front of our son of “vuturnà” he stands one of the many sculptures made here. And he invites us to go on “that there are many others”. In the meantime, he points out what is no longer the primary school in Bocca di Serra due to lack of children (“Few, now the minibus passes and takes them down to Cavaso”) and which has become the seat of the Valcavasia choir, another local glory, known for having accompanied on stage or shows with Marco Paolini and Simone Cristicchi and for having collaborated with Mario Rigoni Stern. Yes, culture is at home here. Other than in some building where we talk about Venetian art and we cross the valley because more than Canova does not appear to be there. Yes, of course, this is popular art, it is difficult to make comparisons: after all, painters, before Titian, were artisans of genius. And the sculptors, in the days of fidia, were only “extraordinary stonemasons”. We are not sure that we have explained it, but on a Sunday that is a bit like that, we should take a leap up here. Don’t you like art? Silence is priceless. 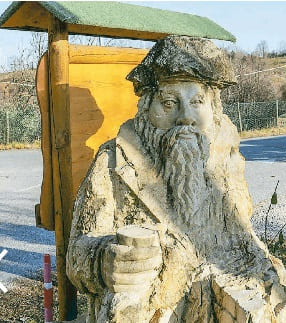