Panoramas beyond the peaks: 4 experiences with a special view from the Dolomite valleys to the beauty of the firmament, with Tofana-Freccia nel Cielo

Third highest peak in the Dolomites, the Tofana di Mezzo (3,244 m) has some views that offer, from sunrise to sunset, emotions for young and old. A journey through rock, history and legends, where the panorama extends far beyond the peaks: from the Dolomite valleys, with the Cortina d’Ampezzo basin in the first place, to the vastness of the sky where you can find the secrets of stars and planets. Here are 4 experiences dedicated to hiking lovers (and not only), including paths, via ferratas and panoramic places that can be reached thanks to the historic Tofana-Freccia nel Cielo lift. Starting and arrival points for excursions and via ferratas, but also for a food and wine stop that combines taste and panorama.

A pleasant high altitude hike between history and nature that allows you to return to Cortina on foot, starting from Ra Valles (2,475 m): reachable by the Tofana-Freccia nel Cielo cable car from the center of Cortina, along the paths made by soldiers during the First World War. The route winds almost completely downhill and crosses a ridge that gives hikers an unforgettable view of the valley below and the magnificent Dolomite peaks. Along the path, before starting the descent towards the dirt road of Cianderou, it is possible to see a suggestive cave inside which a Madonnina is set; precisely at that point a silent and mysterious lake often forms, almost by magic.

Starting from the Capanna Ra Valles Refuge (2,475 m), located next to the Tofana-Freccia nel Cielo cable car station, it is a technical path that allows you to walk down the track of the famous Forcella Rossa slope, one of the most popular black skiers of all the alps for its slope and technical difficulty The attentive and curious gaze will find among rocks and small tufts of grass some plants and flowers typical of the high mountains to be photographed with respect and amazement, such as gentian and the beautiful edelweiss. Once in Pié Tofana, it is possible to go up towards Col Druscié for a lunch or a snack that combines good food and panorama, or continue the descent towards Lake Ghedina and the center of Cortina, among cool and shady woods where it will seem to be. in a fairy tale.

An aided path that connects the Pomedes Refuge (2,303 m) to Ra Valles (2,475 m), where the arrival and departure station of the Tofana-Freccia nel Cielo lifts is located. Developing in a privileged position, it offers those who walk it unique panoramic views of the main Ampezzo peaks such as the Cristallo, Croda da Lago, Antelao, Faloria and Sorapiss mountains. It can be done in both directions and is the ideal route for those who have not yet tried to climb a via ferrata and intend to learn the right progression technique on not particularly difficult terrain: between the rocky walls the exciting encounter with chamois almost always insured!

The Col Druscié Astronomical Observatory allows you to observe one of the most evocative and exciting views: the sky. In the heart of the Dolomites, a UNESCO World Heritage Site, at 1,780 meters above sea level, it houses a 40 cm diameter Ritchey-Chretien telescope and a 28 cm diameter Schmidt Cassegrain. Enthusiasts, students and onlookers visit the Observatory annually to admire the wonders of the universe from a privileged position, thanks to an extremely clear sky and very low light pollution. The Astronomical Observatory can be reached by taking the new Tofana – Freccia nel Cielo cable car which from the center of Cortina d’Ampezzo leads in a few minutes to Col Druscié.

Info on routes, opening hours of the cable car and of the Observatory: www.freccianelcielo.com 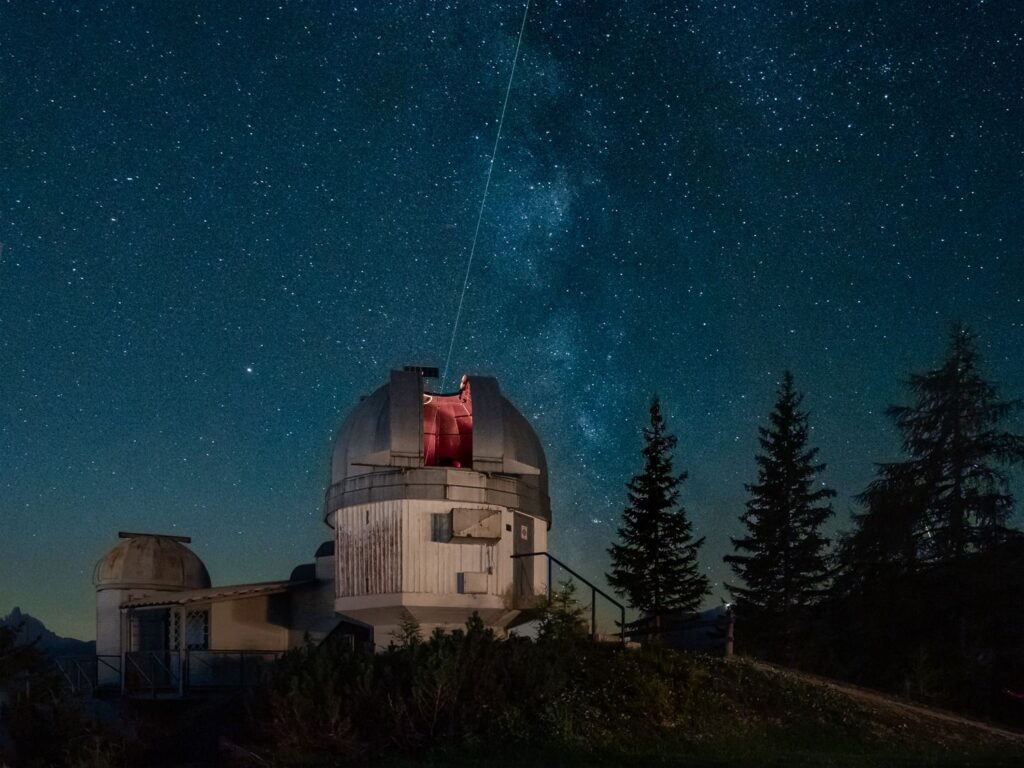