Cornuda, excursion destination
Cornuda rises on a territory of great naturalistic beauty: the hills slope gently towards the plain and make the panorama varied; the climate is mild, the soil fertile and fertile. Located to the east of Asolo, the town was built on the edge of the Roman countryside along the ancient Via Piovega, which connected the Piave to the Brenta. The toponym is of controversial origin and should be linked to a particularity of the territory: according to some it derives from the Latin cornua (horns, extremities) and would allude to the position, at the extreme eastern limit of the centuriate area; according to others it would be linked to the existence of the two hills that would have delimited the first settlement, similar, in the popular imagination, to two horns (“horned”); others, finally, understand Cornuda as an alteration of a term indicating “cut road” or “crossroads” and relate it to the presence of two important roads, the Piovega and the road that still reaches Feltre today.

The presence of man in Cornuda dates back to prehistoric times, as evidenced by the finds recently unearthed in the San Lorenzo Valley and the lithic material that resurfaces almost everywhere. There is also news of findings that occurred during excavation works carried out towards the end of the last century (those carried out for the construction of the spinning mill, in 1881), which suggest the existence on site of an important Paleoveneto center first and then Roman. The period of the barbarian invasions saw a large increase in inhabitants, who came from the nearby villages of the plain or from the areas most exposed to assaults and raids.

Cornuda was soon the seat of a parish church, which became archpriest towards the end of the eighth century. The first written documents referring to certain debts contracted by the population with the monastery of Saints Peter and Theonist of Casier date back to those years. Also in the early Middle Ages the fortress of the Rocca was built, while the Castle of Colle was built later by the Bishop of Treviso, who had obtained these lands as a gift from the Longobard kings. Both were destroyed in the first half of the 1300s and never rebuilt. During the municipal period Cornuda was involved in the struggles that saw the Treviso Municipality, the Bishops, the Ezzelini and the Della Scala families lined up. These clashes ended only with the arrival of a new and more powerful lord who imposed his supremacy on others: the Republic of Venice. The dominion of the Serenissima brought a long period of peace and the formation of numerous land properties, embellished with splendid patrician villas. At the end of the eighteenth century, with the advent of the French, Cornuda suffered the occupation of Napoleon’s troops. Ceded to Austria with all of Lombardy-Veneto, it witnessed the memorable clash between the Pontifical Dragons and the Hapsburg army, in memory of which the Ossuary Monument was erected on the Rocca hill. It was the Habsburgs who planned the arrival of the railway in Cornuda, a feat which was realized only after the unification of Italy: the railway connection brought economic development, amplified by the function of railway junction assumed by Cornuda with respect to the entire piedmont area and completed from the realization of the “road transport-rail transport” connection.

In Cornuda there are numerous possible excursion destinations: we briefly recall the most famous buildings of historical-artistic importance present in the area and, of course, the Bosco Fagaré, included between the Municipalities of Cornuda and Crocetta del Montello, where you can walk the interesting specially prepared didactic-naturalistic paths.

Sanctuary of the Madonna della Rocca
The Sanctuary houses the miraculous image of the Madonna della Rocca object of veneration by the faithful of the area. The building stands at 350 m. above sea level, near an oak tree which, according to legend, even comes from the Holy Land. The current church is made up of a medieval nucleus, perhaps a chapel or a church that pre-existed the sanctuary itself, and of late seventeenth-century structures added to the primitive construction. Over the centuries, the Sanctuary underwent alternating events, looting and destruction, restorations and embellishments, and is today entrusted to the Missionary Sisters of the Immaculate Conception, who enjoy the religious assistance of a specially appointed rector. Each year, by vote, the six parishes of Cornuda, Coste, Covolo, Maser, Nogarè and Onigo, in six different periods of the year, come here on pilgrimage.

An extremely ancient Romanesque church, it stands not far from the Rocca along the bed of the Ru Nero and retains the appearance of an oratory even after the numerous renovations it has undergone over the centuries. History recalls that in the twelfth century the bodies of the two saints mentioned in the title were translated for the particular devotion nurtured by the Cornudesi in their encounter

Inaugurated in 1930, the Asylum – Monument is a building dedicated to the memory of citizens who fell in the First World War: the Municipal Administration, to meet the needs of the population, decided to host the new Asylum for children of the Municipality and since 1968 it has been the municipal seat.

Ossuary Monument to the Fallen of 1848
It stands on the Rocca hill and was built in memory of a famous clash that took place in Cornuda during 8 and 9 May 1848 between the Austrian troops led by General Nugent and the Pontifical Dragons under the command of General Ferrari. The Monument consists of a large obelisk in Pove stone, supported by a short stepped staircase and a stone block on which a large bronze eagle rests, and is surmounted by a golden star. On the sides of the obelisk, four lions support as many commemorative plaques. The work was performed by A. Carlini and inaugurated in 1898.

A nineteenth-century building with a simple structure, it has late eighteenth-century adjacencies and a splendid park where you can see the cottages still used for activities of various kinds.

Elegant building with a solid and linear structure, dating back to the nineteenth century, of which a recent well-executed restoration allows you to admire the original beauty.

Built for a wealthy Asolo family, Villa Bettis dates back to the first centuries of Venetian domination (16th / 17th century). The building extends over two floors: the noble coat of arms stands out on the gabled façade and there is a beautiful pair of triple lancet windows, one above the other, and a large entrance arch; from here a flight of steps flanked by pillars adorned with statues led guests inside. The villa, seriously damaged during the First World War, was unfortunately badly restored.

Former residence of the Cornuda counts, the villa is an imposing building built at various times, starting from the 14th century. The original nucleus, today the west wing, has preserved a reproduction of the coat of arms of the ancient owners and fragments of valuable frescoes.

A very pleasant fifteenth-century building, then enlarged and restored, today it has a beautiful arcade with arches surmounted by a series of windows on the noble floor; the central part of the facade is elevated by one floor and gable; to the west there was a viewpoint that is now walled up.

The building that currently houses the inn dates back to the sixteenth century and seems to have been one of the houses owned by the Trieste, wealthy Asolani who had bought land and goods in Cornuda.

Upon the collapse of the Republic of Venice, Count Guglielmo d’Onigo declared the Bosco Fagaré an inalienable asset and therefore a State patrimony. Subsequently, this state-owned forest was also made alienable (law no.3713 of 04.03.1886) and was proposed in the first instance to the Municipalities, for which a lower price was provided: the Municipality of Cornuda decided to purchase a part of it (15.03.1888 ) with the constraint of conservation. A portion of the entire extension purchased by Cornuda passed to the Municipality of Crocetta dei Montello, established on 01.05.1902 and including the former hamlets of Ciano and Nogarè. The wood remained the undivided property of the municipalities of Cornuda (61%) and Crocetta dei Montello (39%), which formed a consortium (1951) with the aim of maintaining and enhancing the entire forest complex. The Consortium ceased to exist on 31.08.1994 and the supervisory and conservation tasks were assumed by the two Municipalities, which assigned the management of the service to the Municipality of Cornuda.

Great was the importance of the wood in local history: considered sacred by the ancient inhabitants, it was widely exploited during the Middle Ages and even by the Republic of Venice, which reserved particular ecological-forest care for this area and used its wood for both the naval industry. than building. The Bosco dei Fagaré was then considerably damaged during the two recent world wars and is now made up of trees whose average age fluctuates around 50 years. From a botanical point of view, even if its name would indicate the presence of beech woods, you can admire a very rich undergrowth and numerous tree species, variable according to the altitude and exposure to the sun (maple, chestnut, poplar, willow, hazelnut , hornbeam, oak); there are also numerous animals that find refuge in the woods, from insects to reptiles, from birds to small mammals whose presence can be guessed thanks to the traces found on the ground. Paths and rest stops have been set up inside the forest, to allow the visitor to make the most of this beautiful natural environment. 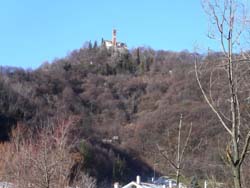