26 MAY 2015
ARTICLES | RELEASES
Convent – Sanctuary of the Madonna dei Miracoli in Motta di Livenza
The Convent of the Madonna dei Miracoli was founded in 1510 after the apparition of the Virgin to Giovanni Cigana. Restored in 1958, it is still the center of the Marian cult. Of a sixteenth-century structure, there are three cloisters, two of which are frescoed. Inside the Basilica you can admire: an Assumption by Palma the Younger, a Nativity by Bernardino d’Asolo and an Apparition from the Tiepolo school.

Organ and orchestral concerts are held.

On 9 March 1510 the virgin appeared to Giovanni Cigana, a pious 79-year-old farmer, a native of Redigole, who for twenty years had been praying the Rosary every day in front of a ‘Capital’ of the Blessed Virgin, which still exists today. As he was passing in front of the capital of the Madonna, located at the intersection of three streets, the man stopped struck by a celestial vision: a beautiful young woman, dressed in white, was sitting on the still green wheat field.

A simple and cordial dialogue took place between the astonished old man and the mysterious Maiden. Then, Maria would have ordered him to fast together with his family for three consecutive Saturdays, to preach this fast to the entire population of Motta and to proclaim it for nine continuous days in all the cities, towns and villages of the Treviso area. Whoever fasted with true repentance would have obtained mercy and forgiveness from the Lord, indignant for the too many sins of the people. In addition, she ordered him to have a wooden church built, where the people could gather in prayer.

Following the miracles that occurred, the ecclesiastical authority instituted a canonical process which confirmed the apparition. The primitive wooden aedicule was replaced by a sanctuary, built between 1486 and 1570.

The Franciscan Minor Fathers have always served there; and this Sanctuary is a true “clinic of the spirit” for many Venetian faithful.

The Apparition of the Virgin to Giovanni Cigana, in front of the capital

[painting by the Tiepolo School]

Of sixteenth-century structures, there are three cloisters, two of which are frescoed. In the one north of the Basilica there is the Chapel of the Apparition where the Cigala prayed. Inside the Basilica there are: on the high altar the ancona attributed to Sansovino; in the side altars an Assumption by Palma il Giovane, a Nativity by Bernardino d’Asolo and an apparition from the school of Tiepolo. 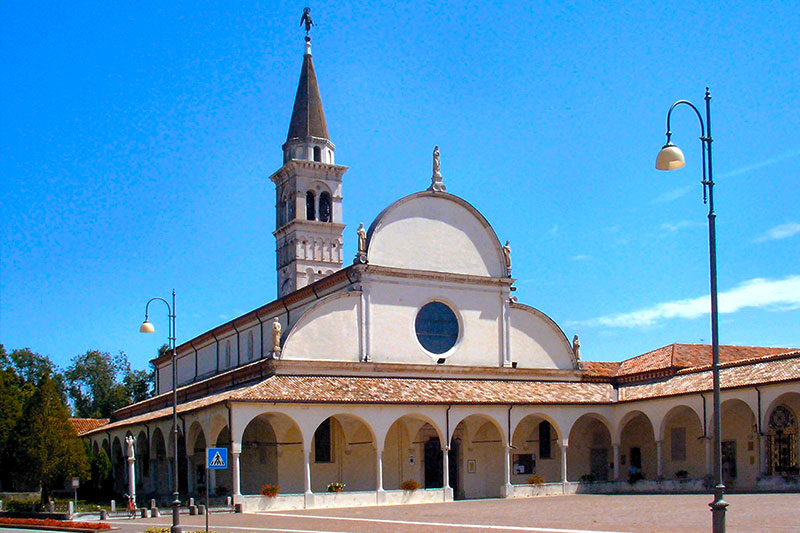