Conegliano Valdobbiadene, an ancient territory between the lagoon and the Dolomite peaks

Conegliano Valdobbiadene, an ancient territory between the lagoon and the Dolomite peaks

Conegliano Valdobbiadene, an ancient territory between the lagoon and the Dolomite peaks
A unique landscape for its beauty and industriousness, embroidered over the centuries by the cultivation of vines and the work of man. A mosaic of places, stories and communities recognized as a UNESCO World Heritage Site.

This is the story of three words that tell a unique territory: hogback, ridge, mosaic. Indeed, to tell the truth, there is a fourth, more important one that gives full meaning to this place: lives. Four terms that designate an area of ​​Veneto nestled between Venice and the Dolomites, between the sea and the peaks: Conegliano Valdobbiadene.
We are in the province of Treviso, on the hills that rise from Conegliano to the northwest towards Valdobbiadene. Two municipalities that delimit a land that has been dedicated to the cultivation of grapes for centuries. The vine marks and designs this territory, literally embroidering the hills, where the production of wine and the incessant work of man have shaped the landscape over the centuries. Viticulture has been widespread in these lands since ancient times, as recalled by a funerary stele on which the words of a Roman centurion are engraved which mentions the vendemmiales, the celebrations on the occasion of the grape harvest. So the vine has created an entire territory, but how? To tell this story it is useful to go back to the other keywords – hogback, ridge, mosaic – which explain the peculiarity of the hilly strip that extends eastward from Valdobbiadene to the Municipality of Vittorio Veneto.

In fact, the area is characterized by a particular geomorphological conformation, called hogback, consisting of a series of steep and steep reliefs elongated in an east-west direction and interspersed with small parallel valleys. A difficult environment, with steep slopes, which man has modeled by perfecting his agricultural technique. The second word is in fact ciglione, a particular type of terracing that uses grassy earth instead of stone, contributing to the solidity of the slopes and reducing soil erosion.

The vine marks and designs this territory, literally embroidering the hills

The incessant work, for centuries, of many small winegrowers has created a multiple agricultural landscape both in forms and in composition. A landscape – here is the last key word – mosaic, strongly fragmented and interconnected, characterized by vineyard plots interspersed with wooded and unproductive elements that function as an effective ecological network. A unique orographic context, whose impervious hardness has been overcome, indeed, used to its own advantage by man. An ancient territorial history which is also joined by a scientific turning point.

To tell this story it is useful to go back to the other keywords: hogback, ridge, mosaic

A territory, therefore, which is a sort of open-air museum. The balance between attention to production and the environment is well symbolized by the recognition, which took place in 2019, as a UNESCO World Heritage Site of the “Prosecco di Conegliano and Valdobbiadene hills”. Not only. Present in the national register of historical rural landscapes, it was also selected to be part of the shortlist of the 22 most extraordinary wine landscapes in the world, presented at the entrance of the Cité des Civilizations du Vin museum, the largest dedicated cultural center in the world of wine, opened in Bordeaux. Important results, explainable thanks to a further keyword: community. The work of man has in fact designed and almost created the territory, but not a solitary work, so much so that some witnesses seem to trace this collaborative spirit back to ancient centuries.

The cathedral of Conegliano (TV)

In fact, in 1574, when Henry III King of Poland passed by on his way to Paris to be crowned King of France, the community of Conegliano made the white wine of the hills gush from the fountain of Neptune for a whole day. A fairytale, almost. The same spirit of unity that led in 1962 a group of 11 producers, representing the main cooperatives of winemakers and the great sparkling wine producers, to set up the Consortium for the Protection of Conegliano Valdobbiadene Prosecco, proposing a production protocol to protect the quality and the image of one’s wine. A protection that also concerns nature itself, so much so that since 2011 the Consortium has adopted a Viticultural Protocol to guide, guarantee and monitor the process of change in the use of plant protection products, minimizing their impact on the environment and on humans. , to obtain greater environmental compatibility and sustainability.

A community that is not only wine, however, but also an equally rich parallel productive and cultural fabric. And that is told by the Voices of the Community project, wanted by the Consortium and dedicated to the other productive and cultural enterprises of Conegliano Valdobbiadene. A voice of this parallel community is that of Clementina Viezzer, for all the Clemi, well known in the area. For years with the craftsmanship, the flavors and the scent of the cuisine of her Osteria di lei at Castelletto di lei has been telling the hills of Conegliano and Valdobbiadene, building a friendship with all of her guests. A loud voice is that of Paolo Paoletti, represented by a family that has managed the last active wool mill in Follina for ten generations, which has built a relationship of trust, sharing and manufacturing experience with the rest of the territory. A community with many souls, therefore, which produces wine but not only that. A mosaic, this time human, which has created and continues to grow the unique territory of Conegliano Valdobbiadene.

Texts and photos taken from http://studio.corriere.it/consorzio-conegliano-valdobbiadene-docg-ls1-prosecco/?fbclid=IwAR3Df_g1qc4UukL5hzJKgmf9R8dHAgEnSnQ9zPrxtEV8HPt64ZaRbto6 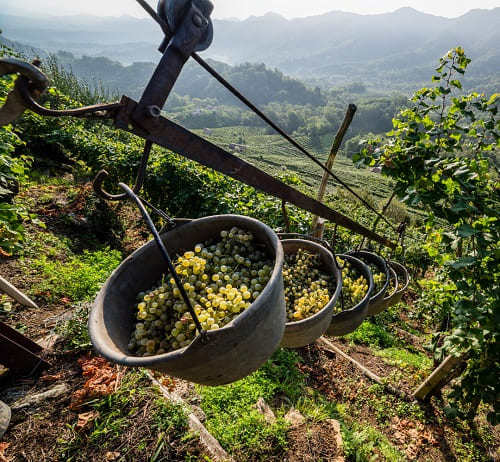