“Conegliano Run in Pink” on 5 March

Maurizio Simonetti’s Running Team organises the first edition of a race dedicated to women but also open to men. Start and finish in Via XX Settembre. Proceeds for charity to Sogni Onlus and Nostra Famiglia. Entries already open

Conegliano (Treviso), 5 January 2023 – Exactly two months to go, but the countdown to the first edition of the Conegliano Run in Rosa has already begun.

On Sunday 5 March, people will run and walk in the heart of Conegliano, which will thus have its own pink run. An occasion of fun, sharing and solidarity, organised by the Running Team Conegliano, a company already active in directing various running events between Veneto and Friuli-Venezia Giulia.

“Conegliano Run in Rosa is a race dedicated to all women, but participation will also be open to men,” explains Maurizio Simonetti, president of Running Team Conegliano. “The event supports the Nastro Rosa world campaign for the prevention of breast cancer, and the proceeds, after deducting organisational costs, will be donated to Sogni Onlus and Nostra Famiglia di Conegliano.

Under the patronage of the Municipality of Conegliano and under the aegis of AICS, Conegliano Run in Rosa will take place over two routes, of 5 and 9 kilometres. The start and finish will be located in the very central Via XX Settembre, and the routes will develop on the hills around the city. Participation will also be open to Nordic walking and fitwalking enthusiasts.

“Some will run, many will walk,” continues Simonetti. “It will be a great festival open to everyone, with no need for membership or medical certificate. We will run in pink in many towns in the province: Conegliano is still missing. We are sure that the city will respond in a big way’.

Registrations are already open via the endu.net platform (www.endu.net/it/events/conegliano-run-in-rosa/entry), or by making a bank transfer to the iban IT71R08904616210160000841 and sending notification of registration to mauri.simonetti@libero.it. The registration fee is 12 euros (8 for children under the age of 8). Conegliano Run in Rosa is ready for its grand debut. 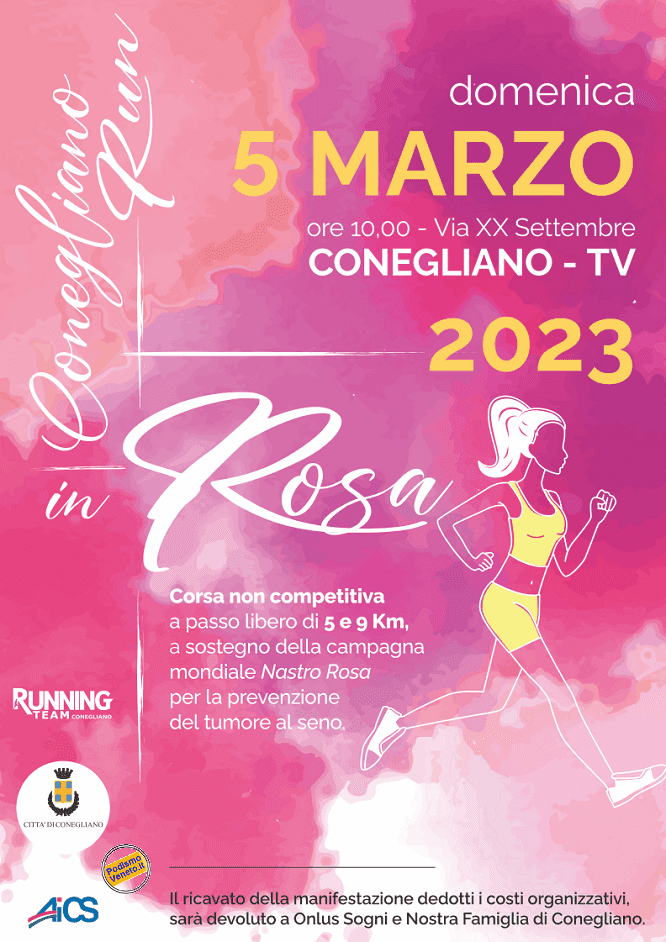