The chestnut is the fruit of the chestnut tree (Castanea sativa), a long-lived tree, on average 15 to 20 meters high, which belongs to the Fagaceae family. Chestnut is native to southern Europe, North Africa and western Asia. It is also present on the Atlantic coasts of Morocco, on the shores of the Caspian Sea and in southern England.

The chestnut loves deep, light, permeable soils, rich in nutritional elements, with a basically acidic pH, with little or no limestone. It does not tolerate heavy and poorly drained soils. It is a heliophilic plant, it loves temperate climates, while enduring even very intense winter colds.

There are two main varieties of this fruit on our market:

– Chestnuts: they are of numerous varieties widespread in the different Italian chestnut areas, all deriving from the European chestnut.

– Browns: they are particularly sought after on the market. They are produced from the cultivated tree and are larger than the chestnut, with an oval or heart shape.

History: The current production area of ​​Combai Marrone extends over a large territory of Valmareno (274.69 sq km), which coincides with the administrative boundaries of 11 of the 16 Municipalities belonging to the Mountain Community of the Treviso Pre-Alps. Historically in that area, chestnut cultivation has represented for centuries a fundamental resource for the population, so much so as to constitute a real civilization of the chestnut. Hectares of woods were used and enjoyed communally by the population, in civic uses that continued to exist until the fall of the Venetian Republic. A document dated 1665 testifies to a singular custom of Combai: the collective collection of chestnuts, carried out by over 150 people, including women and children, who proceeded together with the collection of chestnuts which were then divided equally, according to the needs, between the same families. From the eighteenth century and in the following century, with the transformation of the common woods into state property, a state heritage, we witness the slow but inexorable abandonment of chestnut cultivation, with consequent degradation of the decimated chestnut groves. For centuries, methods and tools, agronomic practices and knowledge, technical knowledge, have been handed down from generation to generation, including coopers (those of Combai are renowned in the valley), bakers, farmers and artisans. Slowly, but nevertheless with satisfactory results, an attempt was made to recover that wealth of knowledge, experience and culture and to bring the production of chestnuts back to the quantitative and qualitative levels of the past. Since the Second World War, the Chestnut Festival is held annually in Combai, which recalls the importance that the fruit has always had and, very famous, attracts thousands of visitors.

Product description: Combai brown is an ovoid, almost elliptical fruit. The peel is bright and dark brown in color, with very evident streaks and grooves and must easily detach from the internal film which takes on a hazelnut color. The fruit has a single body with superficial grooves and is protected by a hedgehog covered with quills. The pulp is whitish in color, has a floury, sugary, tasty, consistent, resistant to cooking, crunchy and sweet flavor. The number of fruits per hedgehog is generally two and must never exceed three. The size is medium-large and usually does not exceed 85-90 fruits per kg. The name “Marroni del Combai” is attributed to a variety of the domestic macrocarpa subspecies of the sativa species, genus Castanea, family Fagacee.

Chestnuts are rich in starch (which cooking transforms into sugars), fiber, potassium and B vitamins (especially B1 and B6). In general, small chestnuts are intended for boiling while medium and large ones are more suitable for roasting; these must be engraved before cooking with a shallow cut of 2-3 cm. in length, and need to be cooked more carefully, over moderate heat, so as not to burn the outside, leaving the inside raw.

Production process: The production area of ​​Marrone di Combai is located in a particular area from the pedoclimatic point of view due to the considerable rainfall, the particular rigidity of temperatures and the nature of the loose, deep, light, fresh, rich acid soils. of potassium and phosphorus. Once the urchins have reached maturity, they are bagged, according to traditional methods, with long cane rods, and after they fall to the ground they are collected, cleaned by brushing machine, calibrated and subsequently, in the case of the sale of the fresh product, they are packaging. There are several conservation techniques:

– ricciaia: traditional method which consists of massing the product, still closed in the curls,

– sterilization: the fruits are immersed in water at 50 ° C for about 45 minutes and dried;

– cold storage: consists of storing the product in cold rooms at 0 ° C for a maximum period of one month.

Availability: From October to December, chestnuts are available at any Venetian market. 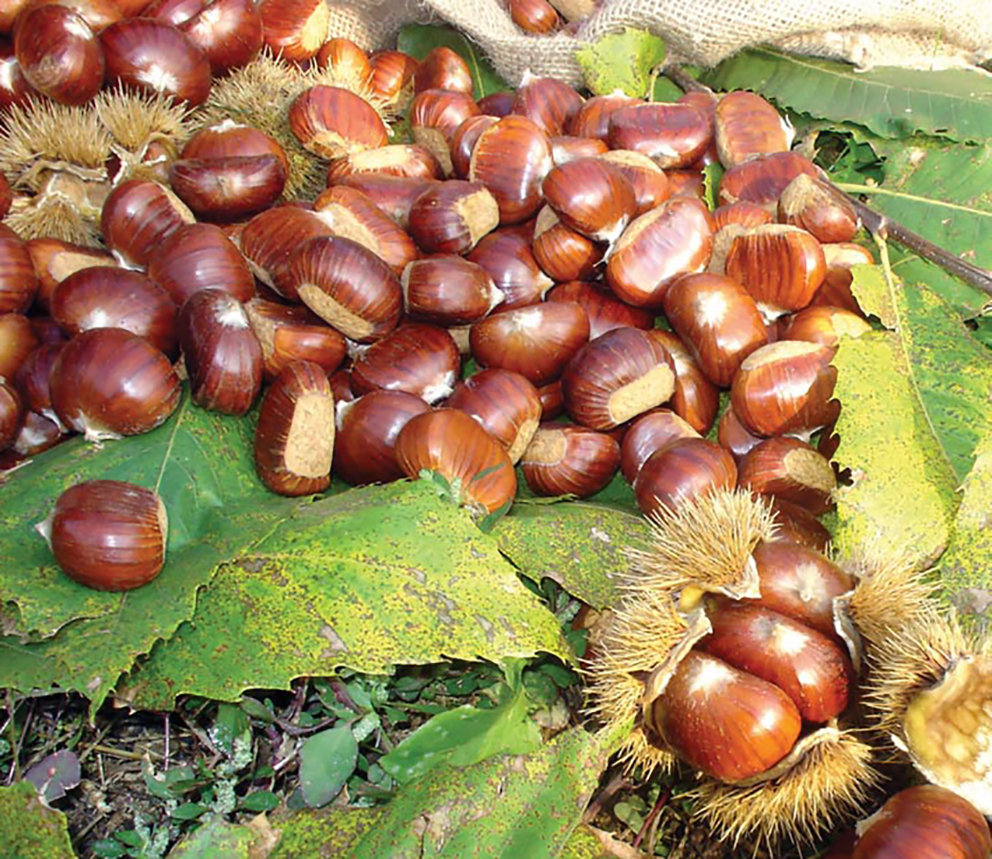