25 MARCH 2013
ARTICLES
Caves of Caglieron in Fregona
One of the most beautiful natural spectacles in the province of Treviso is certainly made up of the suggestive Caglieron caves: a truly unique environment formed by a series of caves that were formed over the centuries following the work of nature and man near a gorge. dug by the waters of the homonymous stream.

The Caglieron Caves are located in Breda di Fregona, near Vittorio Veneto, the complex consists of a series of cavities, part of which of natural origin and part of artificial origin.
The natural one is a deep gorge carved by the Caglieron stream on layers of limestone conglomerate, sandstone and marl from the Middle Miocene.

There are numerous waterfalls, several meters high, with huge potholes at the base. In the deepest part, large rather impure limestone concretions can be seen on the walls that partially close the vault, giving the whole the appearance of a cave.

On the walls of the gorge there are large artificial cavities, obtained with the extraction of sandstone, the typical `dolza stone ‘.
The mining activity that dates back to 1500 and perhaps even earlier, provided the material for the construction of jambs, architraves …, as can still be seen on the old houses and palaces of Vittorio Veneto and its surroundings.
The extraction method used is interesting: since the layers are inclined even over 45 °, the detachment of the material, carried out with large chisels that have left still visible marks, took place in blocks with the caution, however, to leave inclined columns to support the vault. .

The result is such an evocative set of natural and artificial cavities, distributed along the ravine on whose bottom the stream flows swirling and noisy, that it is equipped for tourists.
In fact, a path has been opened which, at first descends along the artificial cavities, then runs suspended over waterfalls and potholes to return to the light and reconnect to an ancient and picturesque mill (15th century) now transformed into a tavern, which once used the waters of the Caglieron stream. It should also be noted the presence of some springs that emerge from fractures, different artificial cavities.

Another important fact, linked to the hardness of the water, is the formation on the soil of particular concretions called gours, but above all of other free concretions such ascave pearls consisting of granules and spheroidal pebbles that grow through subsequent deposition of limestone .

A temporary spring also flows into the cavity, with the formation of travertine. A narrow cave about 7 meters long was found and it ended a few meters from the surface of the ground. On the cave below (orographic right) there is a spring with rather abundant flows, estimated from 1 to 31 / s.

A pedestrian path has been created along the various caves, facilitated by daring wooden bridges. It comes out in the open near an old mill converted into a restaurant-tavern.

Texts and photos taken from: 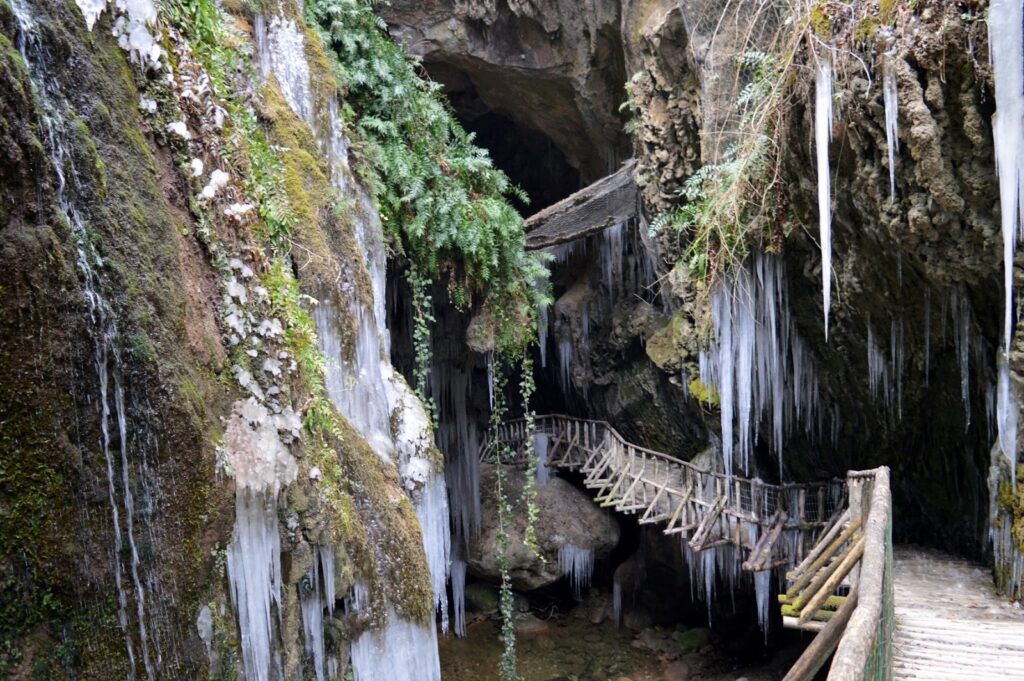