Castles and fortresses along the Trevigiana Altamarca

It is a continuous postcard, the succession of hills that run at the foot of the Prealps, in that portion of the Treviso foothills that today is better known as the “Prosecco hills”. The one that has applied to enter the Unesco World Heritage List and which, perhaps, in a year will be declared a World Heritage Site.

But the spectacle of this hilly area of ​​the Marca has a much longer history than that of the success of the most famous wine in the world, as evidenced by the numerous medieval castles that still dot it today: mighty buildings built in strategic places to flaunt power and defend. territories, which today have become some of the most pleasant places to admire enchanting views, between suggestions of the past and seductions of the landscape.

The city of two castles. An itinerary among the panoramic points of the Altamarca from which the lords of the past guarded their borders, can only start from Susegana, the city of two castles. What dominates the town is the castle of San Salvatore (13th century), with its thirty thousand square meters between fortress and village. Always – still today – residence of the Collalto family, it resisted the attacks of the Hungarians of the fifteenth century and prospered especially after the sixteenth century, hosting numerous artists who embellished it and many others who found inspiration for their works there; in the eighteenth century it was enriched with an imposing palace and hanging gardens overlooking the vast estate, still dotted with vineyards, woods, pastures, fields and ancient farmhouses transformed into welcoming places. After the deep wounds inflicted on the complex during the Great War, the long and passionate restoration carried out by the Collalto family has restored its function as a center of culture, art and encounters. Today it can be visited by appointment or during the numerous events hosted, but even when it is closed to the public, walking along its external perimeter offers an enchanting panoramic view.

Bianca’s ghost. A path of a few kilometers (also accessible by car) among the soft landscapes admired by San Salvatore leads to the ruins of the first Collalto settlement, built in 1110 and which, following the construction of the nearby castle, gradually lost its importance and went meeting a slow decline that culminated with the Great War, during which it was destroyed and definitively abandoned. Legend has it that the ghost of Bianca, a young medieval handmaid walled up alive out of jealousy, still wanders there. Real people, on the other hand, frequent the lively village a lot, thanks to the charm of the place and numerous cultural events and guided tours, as well as on the occasion of the antiques market held every second Sunday of the month.

On the fortress of Castelvecchio. A few kilometers separate Susegana from the historic center of Conegliano. From which a walk along an easy climb leads, along the ancient walls, to the top of the hill that was already inhabited in the 14th-12th century BC, where you can also admire fortification elements dating back to the 11th century. It is the center of Castelvecchio (also reachable by car), where the perimeter once occupied by the millenary fortress is marked, of which few elements remain, including the Torre della Guardia, seat of the Civic Museum. Admission (2.5 euros) allows you to admire, in addition to the frescoes, the art gallery and the archaeological collection, a wide view of the city and the surrounding hills, ranging from the Alps to the plain marked by the Piave.

The fortresses of Ceneda and Serravalle. Vittorio Veneto preserves the fortresses of the two centers from which it was born, Serravalle and Ceneda, emblems of their very different histories. The first was a dynamic trading center connected to the Alemagna where the castrum was built in the 12th century, a military settlement of which there are few vestiges that have been very remodeled due to the damage suffered during the various wars: a famous cultural festival), a tower used as a bed & breakfast and an ancient cellar dug into the rock which, in the summer, houses a wine shop. Ceneda, on the other hand, is dominated by the Castle of San Martino which rises on the San Paolo hill, connected to the cathedral square by a short road that offers an exclusive view over the whole plain. Already built in the V-VI century, it represents the defensive system of an unfortified center scattered in the countryside, just as opposed to the contiguous Serravalle. In addition to always being the home of the bishop of Vittorio Veneto, today it is also a house of spirituality that welcomes numerous cultural initiatives.

Castelbrando: from fortress to charm. At Cison di Valmarino, a spur of the Col de Moi became, at the end of the 12th century, the seat of a military fortress which the Caminesi feudal lords later made habitable. Subsequently, the Brandolini family from Forlì received it as a gift from the Serenissima and made it a monumental patrician residence, which in the second half of the twentieth century became a Salesian center. Since the end of the nineties it has been a charming hotel, Castelbrando, reachable through a road in the woods or a panoramic funicular. And even wider is the view of the Valsana which can be enjoyed from the numerous buildings from various eras that make up the complex and from the large terraces surrounded by crenellated walls.

In Conegliano the terrace overlooking the Prealps

For a quick stop or for a meal with traditional flavors, to rest on the large terrace where the view sweeps from the gardens of the Castle to the Pre-Alps or to sit in the room with many windows overlooking the Conegliano panorama. It is a place for all occasions and for all hours of the day, the Al Castello Restaurant, inside the park of the Conegliano Castle, open from 9 to 24 to welcome breakfasts and snacks in its characteristic environments accompanied by the inevitable Prosecco, but also lunches and dinners with dishes without sophistry such as grilled cheese or soppressa with mushrooms, cod alla vicentina with polenta and delicious homemade desserts.

“A kitchen at the height of the Panorama”

At the ‘Al Castello’ restaurant you can rediscover authentic cuisine linked to the territory.
You can have breakfast, aperitif, lunch or dinner.

The ‘Al Castello’ restaurant bar awaits you every day, also to enjoy the wonderful panorama for a moment.

Between Farra di Soligo and Col San Martino (opening photo) the three towers of Credazzo rise in the green, connected to each other by walls that delimit two internal courtyards. This is what remains of the fort built between the 9th and 10th centuries, part of an articulated defensive system extended to the castles of Col San Martino and Soligo, which have however been lost today. Destroyed in the 15th century and then abandoned, since the 1940s it has been privately owned, thanks to which it has been restored. The road that leads to the entrance to the towers (via San Lorenzo) – even if they cannot be visited inside – and to a rural church of medieval origin, offers a truly spectacular view.

The manor that no longer exists

The castle, in Vidor, has not been there since 1510. Destroyed by the War of the League of Cambrai, it stood in a place so quiet and secluded that in its place was built what was the town’s parish church until the end of the eighteenth century, with the ‘adjacent cemetery, which in the twentieth century became a church-monument in memory of the fallen of the two world wars. It can be reached along a road that starts from the former Town Hall of Vidor and, allowing you to let your gaze wander among a succession of hills, villages and vineyards, arrives on the top of what continues to be called Castle, to enjoy a wide view of the Piave and on the hills.

The ruins among the vineyards

The ruins of the Mondeserto Castle can be reached by following the signs that lead to the places of the Great War. Because the ancient castle built in the early twelfth century on the sum of Col Crosét, which overlooks the town of Saccol, it was transformed into an observatory-bunker by the Austro-Hungarians in 1917. Little is known of its history: the original structure, obtainable from what remained visible, consisted of a wall robust that embraced the entire top of the hill, where now you meet its remains scattered among the vineyards while you reach the top of the hill, to admire the sweetness of an exclusive panorama.

–
how to get there

A27, from Conegliano or Vittorio Veneto

To reach the castles of this itinerary, you can start from the A27 exits of Conegliano and Vittorio Veneto Nord. Susegana is a few kilometers from Conegliano (towards Treviso), 20 kilometers from Pieve di Soligo and the Torri di Credazzo. From there, continuing towards Valdobbiadene, you can also easily find Vidor and Saccol. To go to Cison di Valmarino, on the other hand, from Vittorio Veneto Nord take the direction for Follina. 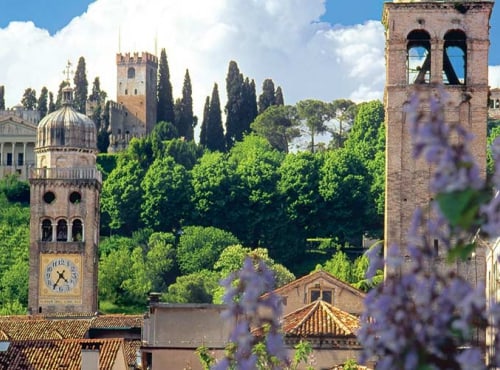