Carpenè Malvolti and Ca ‘Foscari, at the Piccolo Teatro Grassi in Milan present the publication on the 150th anniversary

17 DECEMBER 2018
ARTICLES | RELEASES
Carpenè Malvolti and Ca ‘Foscari, at the Piccolo Teatro Grassi in Milan present the publication on the 150th anniversary
The official presentation of the publication drawn up jointly by the two “Venetian Enterprises”, entitled “Carpenè Malvolti and Ca ‘Foscari – The Renaissance of the Economy in the Veneto of the Nineteenth Century, was held in the Nina Venchi Cloister of the historic Milanese Theater.

Carpenè Malvolti and Ca ‘Foscari together again, to share their 150th anniversary with an event dedicated to the Piccolo Teatro Grassi in Milan.
The two “Venetian Enterprises” – one academic and the other entrepreneurial – having in common the same year of foundation and also the founding values ​​as well as the commitment in favor of the new generations, have in fact come together once again to celebrate this prestigious recurrence through a further special occasion: the presentation of the jointly edited publication entitled “Carpenè Mavolti and Ca ‘Foscari – The Risorgimento of the Economy in the 19th century Veneto”.

The book, written by Giovanni Favero and Carolina De Leo – with the contribution of the students Sara Jesi Bettiol and Elena Bernardi of the Enological School of Conegliano as well as the same Carpenè Malvolti – was presented by the Emeritus Professor of Business Economics at the Ca ‘Foscari University of Venice, Giorgio Brunetti, also author of the afterword of the publication dedicated to the roots of the socio-economic development of Veneto in the late nineteenth century.
To bring an initial greeting to the presentation – moderated by the President of Ca ‘Foscari Alumni, Monica Boccanegra – Paolo De Matteis Larivera of the Carpenè family, who focused on the significant significance of business culture.

Both the Carpené family and the Ca ‘Foscari University are in fact historically committed to the dissemination of knowledge and cultural growth of the younger generations.
“In a picture of Post-Unitary Italy characterized by a strongly conservative system – says Rosanna Carpenè – two pioneering figures with a strong social charge stood out; one of the two was that of my great-great-great-grandfather Antonio Carpenè, who founded our company and who contributed significantly to the development of the local economy, particularly helping winemakers to become aware of the potential of a native grape such as Glera. He did this by giving them lessons “in the square” on how to best manage the work in the vineyard and perfecting the winemaking and sparkling winemaking techniques that would best enhance the characteristics of the grapes. A Man of Science who made his studies available to everyone, driven by a true vocation for dissemination, so much so as to induce the socio-cultural system of the time to establish, right in Conegliano, the first Enological School of Italy, which he had and continues to have a part in the training of oenologists worldwide ”.
The other person was Luigi Luzzatti, who contributed directly with his ideas and knowledge to the foundation of the Ca ‘Foscari University and indirectly to the Conegliano Enological School, with the ambition to create a new ruling class that had the ability to make resurrect the economy of the Veneto in one of its most difficult periods. Two minds enlightened for their time, therefore, but which, due to the vision and social commitment of which they have become a symbol, still represent an example to be inspired by to face the new challenges of the third millennium.

“I would like to underline the importance of this book – underlines the Rector of Ca ‘Foscari Michele Bugliesi – which together with Carpenè Malvolti we wanted to publish to commemorate the anniversary that unites us. The red thread that binds the history of the Ca’Foscari University to that of Carpenè-Malvolti, apparently different realities, is the constant commitment that both have made in the dissemination and promotion of culture, innovation and research, in favor of one social and economic development of the Territory capable of keeping up with the times and at the same time anticipating and governing its future dynamics ”.

The presentation of the publication “Carpenè Mavolti and Ca ‘Foscari – The Risorgimento of the economy in the Veneto of the nineteenth century” ended with the celebratory toast for the 150th Anniversary in the Nina Venchi Cloister of the Piccolo Teatro Grassi. In the glass the best selections of Prosecco Superiore and the prestigious distillates of Carpené Malvolti. 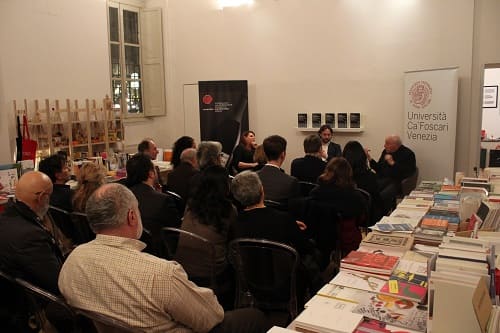