Carnival, like any self-respecting feast and anniversary in Italy, brings with it a triumph of culinary traditions, and often, it is precisely the festivities that highlight the typical features of each region, even if, as in the case of Carnival-related pastries, the recipes are very similar and it is mainly the names that change.

Even in Veneto, the sweets that symbolise the Carnival festivities are fried desserts.

The Carnival recipe that offers the greatest number of variations is the frittella: fried frittelle, frittelle al forno, frittelle alla crema, frittelle allo zabaione, with or without sultanas… but the original Venetian frittelle are devoid of superfluous additions that would alter their original flavour.

The traditional Venetian frittella is made with a batter of eggs, flour, milk, sultanas, pine nuts and sugar, which is fried and sprinkled with a sprinkling of caster sugar on top.

In Verona they are without pine nuts but are enriched with apple and grappa.

Also typical are the filled ones, with zabaglione and or cream, with a larger diameter.

They are perhaps the most typical and widespread Carnival cake in Italy. They have a very ancient origin: it seems they derive from the ‘frictilia’, fried sweets prepared in Ancient Roman times for the spring festivities corresponding to today’s carnival.

To prepare galani, a dough is fried (or baked in the oven) in strips made of flour, butter, sugar and eggs mixed together with a little acquavita, or grappa, marsala, sanbuca, vinsanto (one of these components of your choice). Once ready, the galani are dusted with icing sugar.

Castagnole are another simple traditional recipe from various regions of Italy, including Veneto. They are also called fave or favette due to their round shape and smaller size than fritters.

To make castagnole, balls are formed with a mixture of eggs, sugar, flour and butter, which must then be fried in boiling oil. As with galani, there is the variant of baking them in the oven.

Megiassa, a carnival sweet from Polesine

A typical carnival dessert in Rovigo and Polesine is the Megiassa cake (or ‘meiassa’ or ‘smeggiassa’ depending on the geographical area), also widespread in some areas of the lower Padua region.

The name of the cake seems to derive from another medieval cake, ‘migliaccio’, made using pig’s blood and millet flour (hence the name) and other cereals grown in the Polesine countryside.

It is a poor traditional cake, made with common ingredients. Usually a mixture of corn flour, pumpkin, American potatoes (sweet potatoes), soaked stale bread, or chestnut cake with candied fruit, sultanas, lemon peel, apples, and dried figs. Everything was then sweetened using molasses, a by-product of sucrose obtained from beetroot, the symbolic vegetable of Polesine and Bassa Padovana. 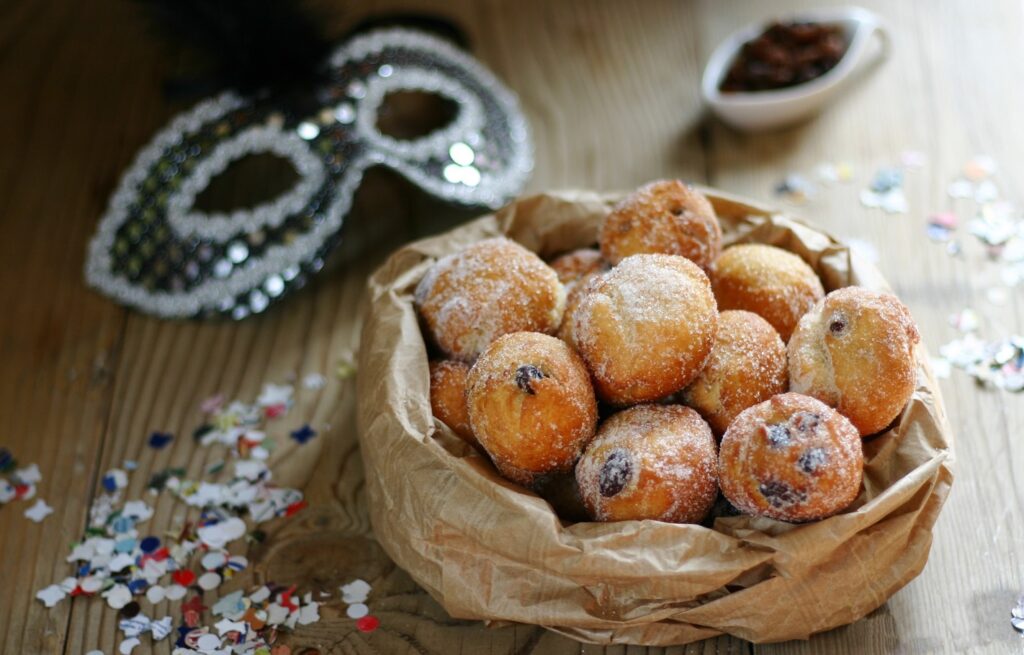