Christmas returns to Caorle. From 4 December 2021 to 9 January 2022 the town will dress up for the third edition of “Caorle Wonderland”, the event that lasts more than a month and which marks the birth of the winter season for the city. Before the Wonderland, in fact, Caorle lived only in the summer. After the success of the second edition (the pre-pandemic one), when about half a million people passed, now even the hotels are starting to believe in the project: around thirty have joined to allow tourists to stay during Christmas. The library and the Sea Museum will also remain open (they will be reached by train) and it will also be possible to visit the bell tower.

The Caorle calendar for Christmas 2021: the appointments
The calendar of events is full, it begins with the lighting of the Christmas tree on December 4th, continues with the Epiphany bonfire and ends on January 9th with fires. But these are just some of the events. For Caorle it will be a magical month, when the huge arched lights installed on the main street will also shine, which above the walkway on the red carpet will offer double the number of lights compared to the previous edition.

The town will change its face. In the area of ​​via Salita dei Fiori, “Music Land” will be set up, a space for young people where DJs (the partnership with Stereocittà for live shows) and aperitifs will also find space for rides: the enchanted castle, the roller coaster, the Star Wars carousel.
Piazza Papa Giovanni XXIII will host the fairytale carousel of horses that turn, but also a 3D cinema that will offer films and even videos that tell the city of Caorle. In this area there will also be some wooden houses (in all about seventy are set up) and some food trucks (about twenty in all those confirmed along the “Food Land” of via Roma, with specialties from all over the world from the “panino col folpo “To Argentine meat, passing through the Brazilian, the Roman pinza and the Romagna piadina, but also Sicilian arancini and a particular eye for the typical caorlotte and frying in particular).

In Campo Bottani, however, the presence of the castle for dogs has been confirmed, which will be managed by the Pet’s Home shop. Here there will be a dog sitting service and also training for four-legged friends, an oasis of play and relaxation for them where owners can also buy harnesses and biscuits.

Piazza Mercato will instead become the theater for the home of Santa Claus (who will give way to the Befana in due course). Here the children will bring their letters and receive candy gifts. Nearby there will be wood sculptors who will compose a nativity scene. Not only that: there will be the small house where you can collect the official images of the event taken by various photographers throughout the city.

Between Largo Francesconi and Piazza Pio X instead the two towers of this Christmas will stand out. Here will be hosted the Star Tower, the 37-meter high tower that overlooks the city, a high-altitude panoramic carousel. Lower, but equally spectacular, the 15-meter Christmas tree, next to which the stage will be set up that will be the center of gravity for solidarity initiatives, songs and magic games, but also culinary events in connection with schools.

In the Campo degli Oriondi area, the presence of the “fake” ice skating rink has been confirmed. A choice made by the organizers from a green point of view: you skate with the blades on a synthetic surface, which however gives the same sensations as ice (and allows enormous savings in energy consumption by not having to keep the ice itself at low temperatures).

Piazza Matteotti, on the other hand, will become the “children’s village” with merry-go-rounds with chains, the adventure trail with climbing, the jump, the little train and the giant Ferris wheel overlooking the historic center.

The real novelty of the year will however be the presence of the cross-country ski track, which will develop parallel to the cliff, facing the sea, in via Roma. It is the first time that on the Venetian coast there will be the opportunity to try cross-country skiing with the sea in the background, a ribbon of a few hundred meters that could also be used for specific training. 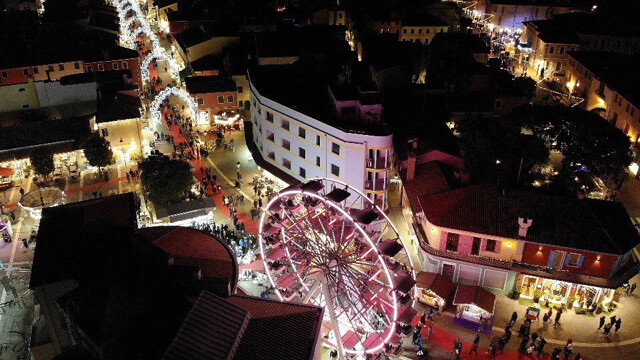