Ca’ del Poggio: the emotions of cycling described by Gregorio and Magrini

San Pietro di Feletto (TV), Oct. 19, 2022 – Anecdotes. Memories. Gags. and lots of music. Luca Gregorio and Riccardo Magrini put on a show: the two popular “voices” of Eurosport cycling were the protagonists of an evening that yesterday, Tuesday, October 18, at Ca’ del Poggio, involved many fans of the world of “two wheels”: champions and former champions, such as Alessandro Ballan and Sacha Modolo, athletic trainer Diego Bragato, who brought greetings from the arrows Filippo Ganna and Elia Viviani. And then again, in no particular order, Marco Varisco, Enrico Zanardo, Paolo Mutton, Renzo Minella, Gianpietro Forcolin, Celeste Granziera, Giuliano Vantaggi, Tommaso Razzolini, Andrea Vidotti and many others.

Luca Gregorio is a journalist, voice and face of Eurosport and Bike Channel. Riccardo Magrini, known to everyone as “The Skinny,” was a professional cyclist from 1977 to 1986, also winning a stage at the Giro d’Italia and one at the Tour de France, and is now a commentator and pundit for Eurosport.

Together they form a pair that leaves its mark on the sports commentary scene: they play with words, mix technicalities and goliardia, and use references that are now lofty and now prosaic. At Ca’ del Poggio, after two days spent pedaling through the Prosecco hills, they told anecdotes, sang and made the evening unforgettable thanks to their friendliness and professionalism.

The ideal backdrop was the Ca’ del Poggio Wall, which once again this year saw the passage of the Giro d’Italia, with 20,000 fans crowded along the now iconic San Pietro di Feletto climb (memorable commentary by Gregorio and Magrini themselves), and was confirmed as an essential stage for many great races: international youth races, amateur cycle parades such as the Granfondo Pinarello and Prosecco Cycling and, most recently, the Veneto Classic, which passed over the Wall last Sunday.

Speaking of the Giro d’Italia, the evening was also an opportunity to display the complete collection of Jeroboams, the 3-liter Prosecco bottles that chronicle the more than 10-year relationship between Astoria, the Corsa Rosa and the great champions of cycling. Including the last one, delivered to Alberto Contador, the Pistolero, last Sunday in Jesolo at the now classic Pedalata con il Campione.

Final toast dedicated to the Stocco family and Ca’ del Poggio, which just in these days, surrounded by the many friends who make the Wall and all its emotions come alive, celebrated 28 years of activity (1994-2022). 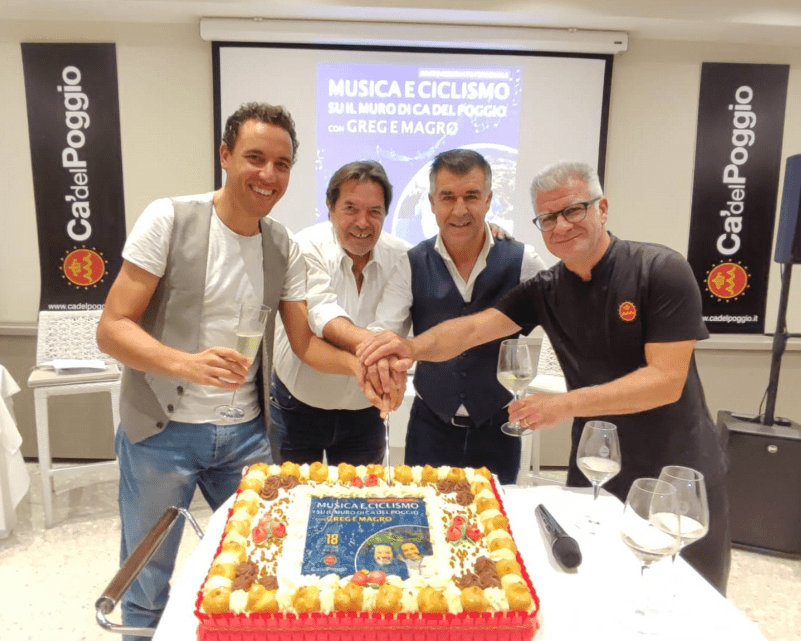