OCTOBER 8, 2019
ARTICLES | RELEASES
Ca ‘del Poggio gives clean energy to the Unesco hills
The inauguration of a new charging station for electric cars, on the 25th anniversary of the restaurant and resort in San Pietro di Feletto, will help to encourage the transition to green mobility in the heart of the hills that have just received recognition as a Heritage of ‘humanity.
The sports champions give the charge on the day of the twenty-fifth anniversary of Ca ‘del Poggio and the energy – strictly clean – is provided by Ascotrade and BeCharge.

The Treviso-based company, supplier of electricity and gas, and the Milanese company of the Be Power Group, have joined forces since December 2018 to help public and private administrations to equip their territory with a capillary infrastructure of charging stations for vehicles electrical.
The target? Encourage the transition to green mobility, save energy and contain CO2 emissions, contributing to the well-being of the environment and society.
It is with this in mind that on Friday 18 October, in San Pietro di Feletto (Treviso), in the heart of the Prosecco hills just recognized as a UNESCO World Heritage Site, two charging stations for electric cars were inaugurated.
The columns – installed by BeCharge and supplied by Ascotrade with energy from renewable sources – are located near Ca ‘del Poggio Ristorante and Resort and represent the first private charging station for electric vehicles to be activated in the land of Prosecco.

The new electric columns were tested by the Jaguar I-Pace, the first 100% electric SUV produced by the British brand, elected “World Car of the Year 2019” and made available by Gidauto, the exclusive dealer for the province of Treviso.
“It is a pride to be able to accompany our territory towards the future – comments Stefano Busolin, Ascotrade president – thanks to the partnership with Be Charge, we are investing in a project to develop the infrastructural network of the territory for electric mobility with energy produced 100% by renewables. Today we inaugurate here in Ca ‘del Poggio, thanks to the collaboration of the Stocco family, the first charging station on private land born from this project. There are a total of almost 200 recharging stations planned throughout the Veneto, thanks to the agreements made with 68 Public Administrations. This project offers a service to all citizens and partially fills the infrastructural gap that limits the purchase of electric vehicles. In Italy there are about 5,000 electric vehicles in circulation (source ANFIA 2018, ed), a number that with the appropriate infrastructures, will have an exponential growth in the coming years “.
Ca ‘del Poggio, together with its partners, looks to the future, to a “green” mobility that can favor tourism that is increasingly respectful of the environment. But Ca ‘del Poggio has its roots in the past: in 25 years of catering and hospitality that the Stocco family has successfully carried out since October 18, 1994.
In this quarter of a century, Ca ‘del Poggio has met the growing favor of a refined clientele who appreciate the seafood cuisine proposed by the Stocco family and love to immerse themselves in the relaxed and elegant atmosphere of the Prosecco hills, also taking advantage of a view that in San Pietro di Feletto leaves every time amazed.

“That of Ca ‘del Poggio is a story that starts from afar – says Alberto Stocco -. It all started with grandfather Giovanni, a pastry chef in Conegliano, who had the foresight to buy the property on which Ca ‘del Poggio stands today. Dad Fortunato and mom Maria Stella, after a restaurant experience in Bibione Pineda, started the project that was then developed by me and my brother Marco. Ca ‘del Poggio is not just catering and hospitality: it is also attention to social issues and sport, it is proximity to the territory. It is the idea of ​​a tourism that respects the places, especially today that our beautiful hills have become a UNESCO World Heritage Site. The inauguration of the electricity columns goes in this direction. Today we are celebrating 25 years: it is not a point of arrival, but of departure “.
Ca ‘del Poggio is also one of the temples of Venetian sport. In via dei Pascoli, the only climb certified by the Italian Cycling Federation, renamed Muro di Ca ‘del Poggio and twinned with Muro di Grammont and Mûr-de-Bretagne, the 2009, 2013, 2014 and 2017 editions of the Giro d’ Italy, the 2010 Italian Professional Championship and the 2018 edition of the Giro d’Italia Under 23.
It is also for this reason that, on the 25th anniversary, in the presence of the mayor of San Pietro di Feletto, Maria Assunta Rizzo, the feast of Ca ‘del Poggio was honored by the presence of some sports stars: the Sacha cyclists Modolo and Andrea Vendrame, the volleyball players of the Imoco Italian champion, Indre Sorokaite and Jennifer Geerties, and the rugby players of Benetton, Irné Herbst, Eli Colin Snyman and Iliesa Ratuva Tavuyara. They give the charge, while Ca ‘del Poggio smiles at the future.

There is Prosecco. And there is the sea. The Relais Ca ‘del Poggio restaurant in San Pietro di Feletto, in the Treviso area, perfectly combines the two souls of the Stocco family. The seafaring one, which led Fortunato and his wife Maria Stella to face a qualified restaurant experience in Bibione, before moving to San Pietro di Feletto. And the hilly one, played by the sons Alberto and Marco, who, with the help of their parents, have made the family tradition their own, revisiting it with a touch of modernity and elegance. The Relais Ca ‘del Poggio restaurant has been open in San Pietro di Feletto, along the Strada del Prosecco Superiore Docg, since October 18, 1994, and since then it has met the growing favor of a refined and demanding clientele.
If the view over the Prosecco hills that can be admired from the rooms of the Relais Ca ‘del Poggio restaurant goes straight to the heart, the palate of the Stocco family guests is delighted by a seafood cuisine which, thanks to the creativity of the chefs Marco Stocco and Vincenzo Vairo, it has now attracted the attention of the most severe gourmets. Very well known in the sporting environment (in via dei Pascoli, the only climb certified by the Italian Cycling Federation, renamed Muro di Ca ‘del Poggio and twinned with the Wall of Grammont, the legendary climb of the Tour of Flanders, the 2009, 2013 editions have passed and 2014 of the Giro d’Italia and the Italian Professional Championship of 2010), the Relais Ca ‘del Poggio Restaurant has 80 seats inserted in an elegant and at the same time familiar environment, in which Alberto Stocco and his collaborators make guests feel like at their home.
Since May 2013, the tourist offer of Ca ‘del Poggio has been enriched by the Hotel Villa del Poggio, a structure equipped with every comfort (and with a wonderful panoramic terrace) which integrates perfectly with the hospitality offered by the restaurant, transforming this corner of the Marca Trevigiana – 60 km from Venice – in a kind of paradise for customers who love to immerse themselves in the relaxed and elegant atmosphere of the Prosecco hills. Nearby there are golf and horse riding courses, as well as nature trails to explore on foot or with the mountain bikes provided by the hotel, for a holiday dedicated to wellness and relaxation 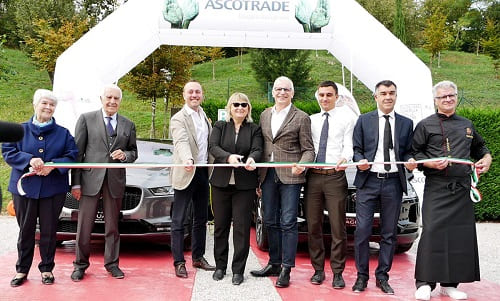