Byzantine icon at the Cloistered Nuns in Treviso

Byzantine icon at the Cloistered Nuns in Treviso

There ‘Byzantine icon of obscure origins, but certainly distant in time, within a monastery at the gates of Treviso, a few steps from one of the arteries piu’ busy lapping the citta’.E ‘a’ image in high relief of sycamore wood, called “Our Lady of the Belt”, returned to Treviso after a loan at the diocesan museum of St. Apollonia, in Venice, and now the public can ‘return to admire with more’ ease ‘since the cloistered nuns of the Visitation order, who manage the structure, have decided to open the doors of some rooms.

The monastery, built in the imminence of the Great War, today is the home for 23 nuns who guard, among other relics, the heart of St. Francis de Sales, patron saint of journalists and, above all, founder of the order, in 17 / th century, in France, together with Saint Jeanne Frances de Chantal.

Over the centuries, due to migrations due to the political instability of the transalpine region, the nuns have progressively moved to Northern Italy, finding a favorable place to stay in Treviso in the last century as well. Until the mid-twentieth century their presence was much more massive than the current one, and the resources obtained from the breeding and cultivation of the small adjoining farm were still sufficient for their livelihood and assistance to the needy.

In the following decades, the convent slowly emptied itself due to the progressive decline in vocations, but the environment still maintains the silent charm of a place of profound meditation and prayer.

The “Blessed Virgin of the Belt” has a dubious dating and its location is judged, according to the scholars consulted, to have spanned about four centuries at the turn of the year 1000. Together with the work and ‘also exposed the sarcophagus in which, by his departure from Byzantium, perhaps more’ than a millennium ago, the relief was transported through European countries.

Even today the nuns maintain small business traditions, such as the production of cribs, embroidered and sweet leaders baked to sell to outside visitors, or offer those looking for some quiet days inside the rooms made available, as before, for wayfarers and pilgrims.
ANSA news
photo taken from www.tribunatreviso.it and www.oggitreviso.it 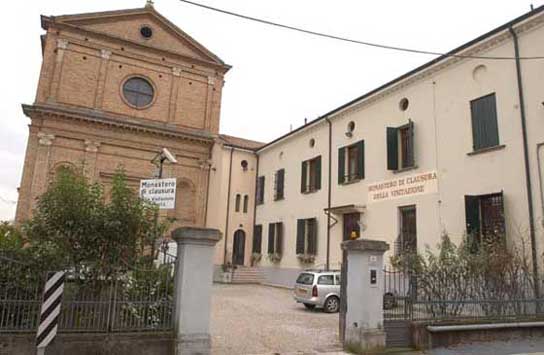