21st MAY 2018
ARTICLES | RELEASES
Bicycle routes departing from Conegliano indicated by the Hotel Canon D’Oro
The cycling itineraries starting from Conegliano are many and offer great satisfaction. It is no coincidence that the Giro d’Italia passes through these parts in many of its editions.

The Best Western Canon d’Oro Hotel has selected some in particular that will satisfy you both from the point of view of sporting commitment and for the beauty of the places you will pass through.

Let’s see them together:

The first 96 km itinerary takes you from Conegliano to Belluno via Vittorio Veneto through the Fadalto saddle. Once in Belluno, go back to Conegliano through the San Boldo pass along the gentle landscapes of the Treviso Pre-Alps.

The itinerary can also be done in the opposite direction, in this case the climb to the San Boldo pass will be the most demanding stretch: you will have to overcome the 18 hairpin bends with a vertical drop of 451m in just 6 km.
See the route map

The second itinerary is a ring that takes you from Conegliano to Valdobbiadene and back to Conegliano, crossing the entire Prosecco DOCG production area. The road offers incredible views of the Prosecco hills, passes through enchanting villages clinging to the vineyards, such as S. Pietro di Feletto, Refrontolo, Rolle, Follina, Combai, Santo Stefano …

We recommend that you do the route in an anti-clockwise direction because the outward leg is the most challenging.
See the route map

This itinerary is a real journey into memory and local history, to the rediscovery of agricultural and peasant traditions where environmental, artistic and cultural treasures are added to the presence of wineries.

It is a tour to be enjoyed all the way through, getting excited at every bend and in every season, an explosion of colors and immense expanses of rows of vines. The route is full of ups and downs.
See the route map

The proposed itinerary is a ring route. It starts from Conegliano, once you arrive in Susegana the Castle of San Salvatore stands out on top of a hill; surrounded by vineyards, it brings back memories to distant times, to tales of ladies and knights. Continuing on, you are immersed in the fief of the Collalto Counts in a suggestive path through oak woods, climbing over the Tombola hill. The road runs along a very scenic stretch of light dirt road.

This leads to the remains of the castle of Collalto, of even more ancient origins. After having touched Refrontolo and San Pietro di Feletto, we return to Conegliano passing near its Castle, the medieval sentinel of the city located on the top of Colle di Giano. A very varied and suggestive route that will leave you fully satisfied.
See the route map

This circular itinerary develops around the Montello wood, crossing places that during the First World War were the scene of bitter battles between the Italian and Austrian armies.

Montello is a curious 370 meters high relief, bordered to the north by the Piave river and to the south by the Venetian plain; almost entirely covered by woods, it is a continuous succession of strange funnel-shaped karst valleys, called dolines.

Our itinerary runs exactly along its Periplus, which on the north side, due to the magnificent view over the Piave valley, is also called “the panoramic”. The circumnavigation on the south side is a quiet and evocative path along a beautiful canal at the edge of the wood that alternates between vineyards and farmhouses.
Alternatively you can tackle “the ridge”, a road that winds along the top, in an east – west direction, or you can dare on one of the 20 “sockets”, that is the roads – almost all paved – that intersect Montello in the north -south. The climbs, however, are in some cases very demanding.
See the route map

To learn more, here is the interesting Guide to the Montello cycling routes published by the Province of Treviso.

The Best Western Canon d’Oro is a certified bike hotel, member of the “Treviso province of Sport” Product Club. Discover all the services dedicated to cyclists that the hotel offers you. 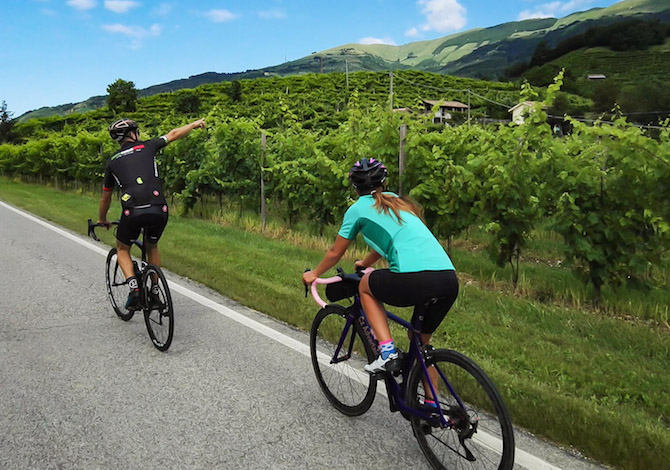