The lighthouse is located in the easternmost area of ​​Bibione, at the apex of the delta mouth of the Tagliamento river. Built by the Civil Engineers at the beginning of the twentieth century, when the coast line was more advanced with a very linear architecture and simply painted in white, it consists of a two-storey rectangular body and a cylindrical tower of 21 meters, which makes it visible up to 15 miles from the coast.

It was destroyed by a bombing in June 1917, but was immediately rebuilt. Seeing it from the sea, it stands out against the green of the nature reserve of the pine forest, which, before the erosion caused by the sea, also grew in the area in front of it.

Initially, the keepers of the lighthouse had to keep the fire burning, which was amplified by powerful lenses. The electrification took place in 1952 and from 1973 the plant was completely automated.

In fact, in the last 30 years, coastal evolution has caused the erosion of a large portion of the beach and breakwater embankments had to be built to preserve the lighthouse. In addition to directly counteracting erosion, their arrangement should allow the accumulation of new sands brought from the Tagliamento.
The causes that led to the transformation of the beach are both natural and anthropic and can be identified in the dynamics of the coastal environments which are characterized by rapid and frequent variability of the portion of the emerged territory.

It is a nocturnal reference point for sailors, but also a daytime destination for walks, bike rides and horseback rides for the many summer tourists and beyond.

In 2015 the first part of the renovation works was completed. Currently, the internal area often hosts exhibitions and events, as well as a civil registry office where weddings can be celebrated. In the outdoor area, during the opening days and hours, toilets and vending machines for drinks and snacks are available to visitors.

The Lighthouse is located in an area of ​​naturalistic value between the Lido dei Pini area and the mouth of the Tagliamento, characterized by the presence of pine forest, sandy dunes and wetlands rich in native flora and fauna.
The cycle / pedestrian path that connects it to Lido dei Pini, running parallel to the sea, is suggestive. Along this path, which crosses nature, several sculptures have been placed as part of the Land Play Walk project. Alternatively, the lighthouse can also be reached on foot or by bicycle along Via del Faro, starting from the intersection with Via del Mare near the 6th basin. In the summer months and in certain days outside the bathing season, the bike + boat connection is also active through the mouth of the Tagliamento, connecting the Faro area with Lignano Riviera.

The Bibione Lighthouse (or Punta Tagliamento Lighthouse) is open every day from 29 May to 3 October 2021 at the following times:

The Lighthouse will be closed in case of adverse weather conditions.

Access to the internal area is allowed in small groups of up to 4-5 people at the same time and the use of a mask, social distancing and hand sanitation are mandatory.

At the Lighthouse you can buy tickets for the boat + bike transport service between Bibione and Lignano “X River” across the Tagliamento river.
In the outdoor area, toilets and vending machines for drinks.

LuMe Stories of Light and Memories
Inside the Bibione lighthouse from 29 May to 1 November 2021, the exhibition of the “LuMe Stories of Light and Memories” project can be visited free of charge.
The exhibition, on the creation, research and project curated by Annalia Boldrin and Sara D’Annunzio, will take visitors on a visual and sound journey through the memories and unpublished photographs of the protagonists of the history of the Lighthouse. 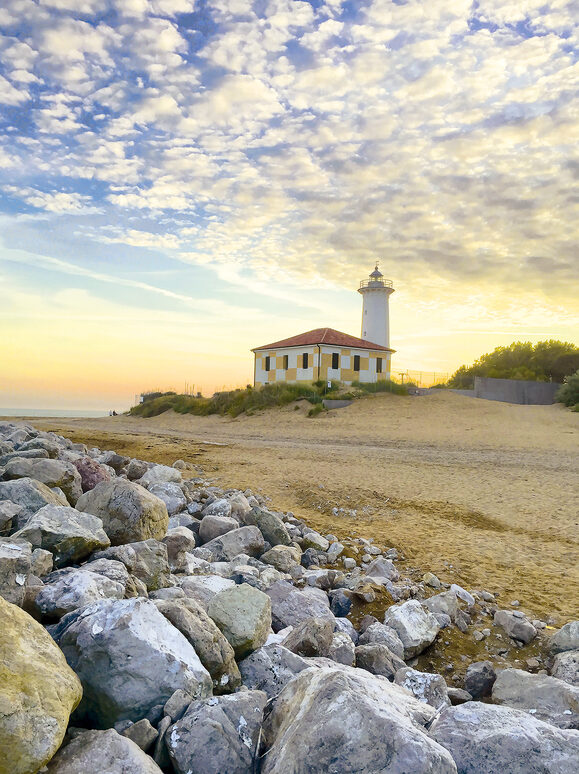