When it’s not just polenta but …
Biancoperla corn polenta

The rediscovery of Biancoperla corn is of recent times. It was called white flour for those on the left Piave but it is now endangered in the mills and hybrid corn has spread. The Biancoperla grain is glassy and of good size, its color is pearly white, it is a variety of free-pollinating (self-fertilizing) corn and as such it does not produce large productions. Starting from the post-war years, as with many varieties of corn, also the production of Biancoperla has gradually decreased. Considered to be of greater value, it was the polenta that geographically divided the plain and the hill from the mountain, where the yellow one was widespread, more rustic and more suited to agronomic conditions.

In recent years, initiatives have been launched aimed at enhancing and protecting this variety which led to the creation of the Biancoperla Corn Conservation Association c / c IPSAA “Conte di Cavour” of Castelfranco TV. And the Slow Food Presidium was also recognized to them to defend their knowledge and improve their quality. These seeds are jealously guarded by a group of passionate farmers of the past where it is possible to associate by respecting the regulation of the statute. In particular, the stone grinding, already practiced in the past, is enhanced, which enhances the excellent organoleptic qualities of the product.

In a context such as the present one, characterized by an agri-food system oriented towards the use of an increasingly limited range of specialized plants and animals capable of very high production, safeguarding Rural Biodiversity means diversifying activities while maintaining the highest possible number in production. of plant and animal populations left over from past agricultural cultures and in danger of extinction. Foods with a high level of taste and flavor are closely connected to the genetic heritage of native, rustic, not very productive plants and animals grown / reared, processed, cooked and consumed with traditional methods and times. Their cultivation / breeding as well as the methods of transformation and use represent aspects that significantly characterize our roots and, therefore, their safeguarding constitutes first of all an operation of profound cultural significance.
This safeguard cannot be an end in itself nor be motivated by nostalgia for the good old days, but must result from a concrete and sustainable enhancement of agri-food production for the benefit of farmers, processors and consumers. The “Domenico Sartor” State Professional Institute for Agriculture and the Environment of Castelfranco Veneto, as part of its institutional, training and promotional tasks, with the direct involvement of students and their technical structures, in collaboration with various institutions, among which the “N.Strampelli” Institute of Agricultural Genetics of Lonigo and “Veneto Agricoltura” deserve particular mention, have launched various initiatives that can be qualified as concrete contributions to the safeguarding and enhancement of rural biodiversity.
The rediscovery of the traditions and flavors of the past is not just a gesture linked to an increasingly widespread practice of recovering good food, but represents a fair cultural compensation for the knowledge and diversity of our land, full of memory and history. Among these, Biancoperla corn is only a small but significant piece, in which quality and traditions emerge jointly, giving life to a product with unique characteristics.

Biancoperla, with its large glassy grain and pearly white color, as its name suggests, is a free-pollinating variety and as such has no production comparable to a hybrid corn.
It should be grown in “spatial isolation”, ie at least 300 meters from other corn or in “temporal isolation”, i.e. with a sowing delay of 45/50 days, all of this to avoid crossing with other corn. The lower yield is amply compensated by the quality of the flour obtained and which allows you to prepare an exquisite polenta, widely known and appreciated in the past. This variety of corn, in fact, has been for a long time and for a large area of ​​the Venetian plain including the Marca Trevigiana, the corn reserved almost exclusively for food consumption and destined for the production of white polenta, here considered of greater value than the yellow. Even if its origins are not yet fully clarified, it seems possible to trace Biancoperla back to the group of “Perla” which includes numerous variants, including the Righetta Tagliamento. In addition to the cultural aspects linked to this typical production, the conservation of Biancoperla is of the utmost importance 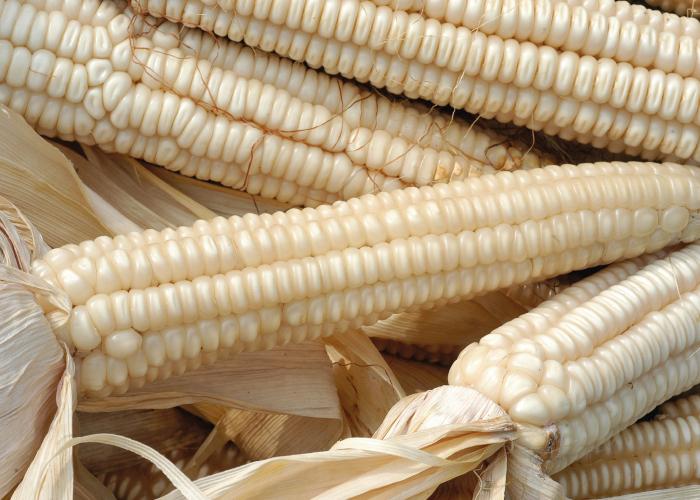